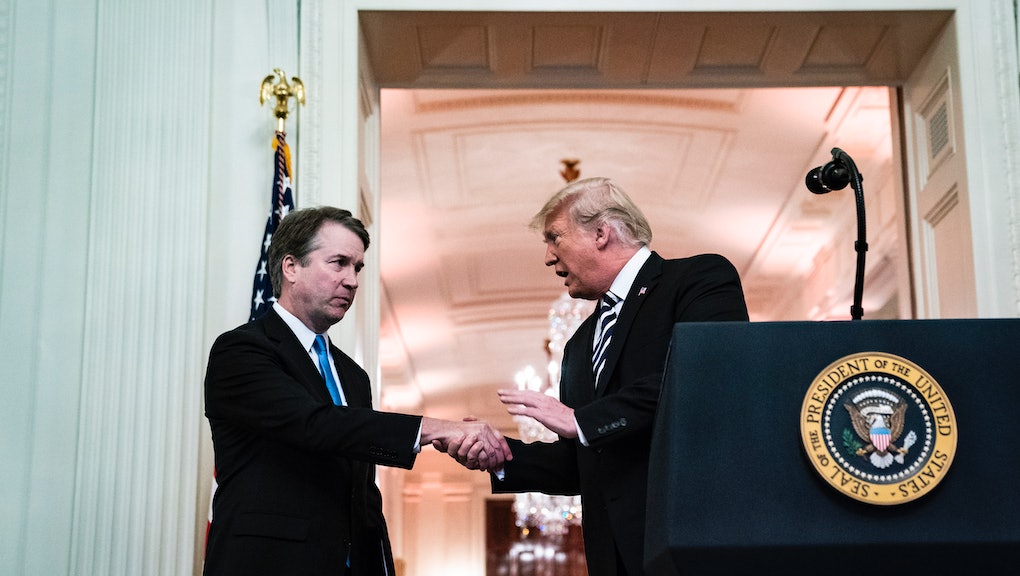 Since getting routed in the 2020 election, former president and current pretend president Donald Trump has largely been toiling in obscurity. But with a seemingly endless number of books about him on the horizon, he appears ready to use just about everyone from his orbit as a ladder, dragging them down as he climbs his way back to the spotlight — not that they don't deserve it.

The latest target of Trump's ire is Supreme Court Justice Brett Kavanaugh: According to a new book from gossip merchant Michael Wolff, Trump claims Kavanaugh would be "totally disgraced" if not for Trump so graciously gifting him a seat on the Supreme Court.

"Where would he be without me? I saved his life," Trump reportedly told Wolff in an interview for Wolff's new book, Landslide. "He wouldn't even be in a law firm. Who would have had him? Nobody. Totally disgraced. Only I saved him."

Now, perhaps you're thinking that maybe Trump's frustration with Kavanaugh came from his confirmation process, which became contentious after several women credibly accused Kavanaugh of sexual misconduct. Or maybe Trump started turning on Kavanaugh when the judge aggressively and angrily defended himself during his testimony before the Senate, showing none of the staid decorum Supreme Court justices are supposed to have.

Nah. In fact, it seems Trump's pretty damn proud of sticking with Kavanaugh during that time. Per the book, Trump claims "practically every senator called" and asked him to move on from Kavanaugh. "I went through that thing and fought like hell for Kavanaugh — and I saved his life, and I saved his career. At great expense to myself ... okay?" Trump told Wolff. "I fought for that guy and kept him."

Instead, Trump is upset that Kavanaugh hasn't voted in line with the staunchly conservative side of the Supreme Court that he was supposed to be (and largely is!) aligned with. According to Wolff's book, cited by a report from Axios, Trump is "very disappointed" that Kavanaugh hasn't voted with his more right-wing counterparts, like Justice Clarence Thomas, who is a reliable vote for whatever the worst possible outcome available is in any given case. Kavanaugh has at times sided with the more liberal members of the court, including on a case that would have allowed states to block funding for Planned Parenthood.

This independent streak has apparently irked Trump, who says that voting for something other than conservative orthodoxy means that Kavanaugh "hasn't had the courage you need to be a great justice." The former president apparently regrets the nomination, too. According to Wolff's book, Trump said, "There were so many others I could have appointed, and everyone wanted me to."

As with most things Trump says, there is just so much here that simply isn't true. Trump picked Kavanaugh, but it's not like he was this obscure judge that Trump himself discovered and molded into Supreme Court material. Kavanaugh was a judge for a United States Court of Appeals for 12 years when Trump tapped him, and he had been the White House Staff Secretary for George W. Bush prior to that. Plus, Kavanaugh was on the list of recommended judges provided to Trump by the Federalist Society; all Trump did was pick him from some pre-selected names. He might as well have thrown a dart at the paper — and for all we know, he did exactly that.

Also, it's not like Kavanaugh has been some secret progressive on the bench. He's aligned with Thomas on nearly 80% of decisions, and with fellow conservative Justice Samuel Alito 86% of the time, per SCOTUSblog. He was a dissenting vote when the Supreme Court extended employment protections to LGBTQ+ workers. Kavanaugh is very conservative! He's just not in alignment with Trump on everything — like, for instance, claims that the 2020 election was stolen.

No matter how Kavanaugh votes, even if he were to suddenly turn into a reliable liberal, he'll always be tied to Trump. And honestly, they deserve each other.