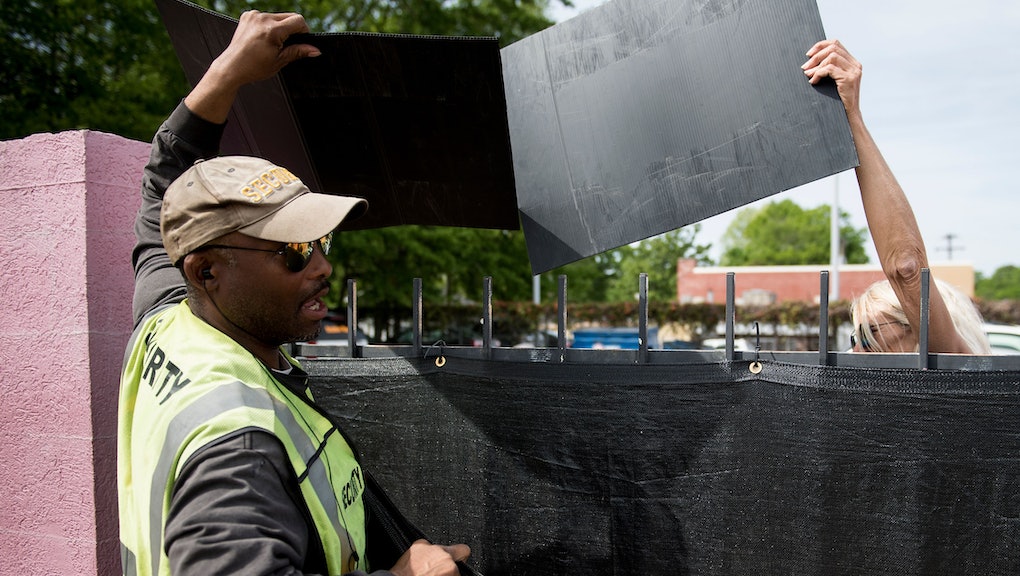 It just got easier to harass abortion patients in Mississippi

Getting an abortion in Mississippi just got harder. On Tuesday night, the cty council in Jackson, Mississippi, voted to repeal an ordinance that protected people entering the clinic from harassment and unwanted advances from anti-choice activists.

The decision by the city council comes one year after a group of citizens belonging to an anti-abortion organization, Sidewalk Advocates for Life, sued to overturn a city ordinance that created a buffer zone between the one remaining abortion clinic in the state, Jackson Women's Health, and anti-abortion protesters. Among other safety regulations, the ordinance banned people from coming within 8 feet of someone attempting to enter an abortion clinic.

The U.S. Supreme Court ruled in 2014 that states can impose their own laws related to clinic buffer zones. "Buffer zones have long served as an important tool for defending the exercise of a range of rights, including access to schools, the ballot box, and to constitutionally protected reproductive health care," Nancy Northup, the president and CEO of the Center for Reproductive Rights, said. In 2014, the court struck down a law in Massachusetts similar to the Jackson ordinance, a move that the CRR argued would harm patients by neglecting to protect them from unwanted verbal attacks from protesters.

The suit was filed by an anti-government regulation firm called Mississippi Justice Institute, which framed the rule as an issue of free speech. "[In 2019], the Jackson City Council passed a new law that makes it a crime for those who oppose abortion inside the city limits to exercise what most of us would believe are fundamental — and constitutionally guaranteed — rights of speech and the press," wrote Andy Taggart, who served as pro-bono counsel on the case.

According to the Madison County Journal, a local paper, the city ordinance also banned "amplified sound" and prohibited individuals from "congregating or demonstrating within 15 feet of the abortion facility." If found in violation of those rules, an anti-abortion activist could face in a hefty fine or jail time.

Taggart claimed that someone who didn't want to accept anti-choice flyers or literature simply didn't have to take it from protesters, and that if an anti-choice activist says something a patient doesn't want to hear, the patient simply doesn't have to listen.

But the advice — and the ordinance's repeal — contradicts what actually happens outside of abortion clinics, and ignores the realities of the harassment and shame patients seeking abortion care can face. As Clare Busch reported for Mic in September, the harassment by anti-abortion activists can be so intimidating that clinic escorts have come to play a major role in making sure that patients can enter the clinic safely. The clinic escorts at Jackson Women's Health "call themselves 'defenders' because of the large crowds of protesters they usually face down," Mic wrote.

Mic added that protesters will often shout at patients and clinic escorts. Videos of the interactions between clinic escorts and anti-abortion activists portray interactions that are very different from the ones Sidewalk Advocates for Life advocates for — less like the "counseling" they describe, and more like aggressive attempts to scare someone away from getting the health care they need.

More like this
Vaccines are good. Threatening to evict someone over them is not
By Rafi Schwartz
I never want Tucker Carlson to stop talking about Nicki Minaj's cousin's friend's enormous balls
By Rafi Schwartz
A mother and daughter have been charged with murder after performing a back alley butt lift
By Melissa Pandika
Stay up to date