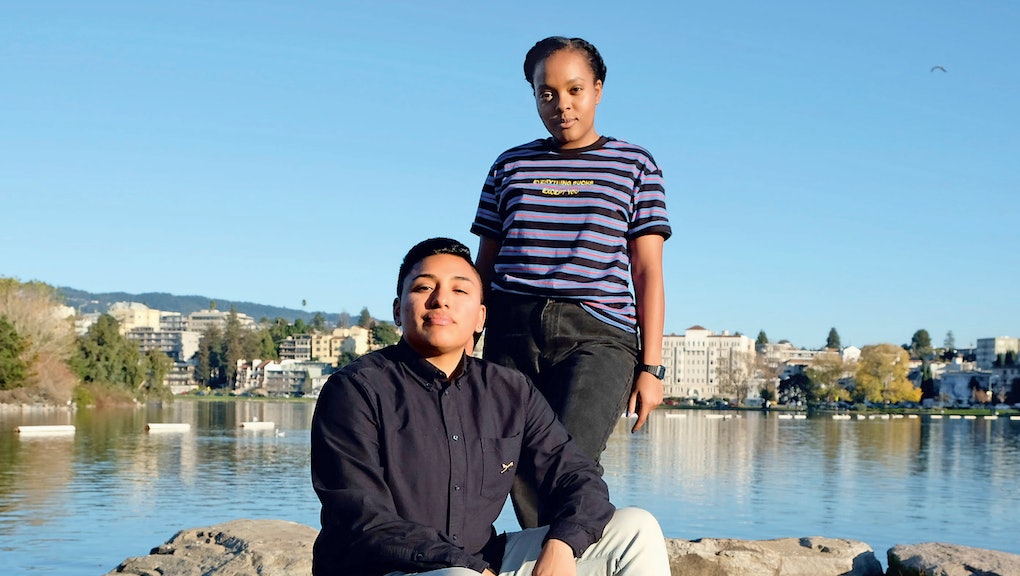 It’s still oddly challenging, as a person of color, to find stories about us that focus on joy versus struggle. Of course, literature about the quest for emotional and financial freedom, rights, and our continued stride toward justice are crucial reads. But we need more that doesn't solely focus on our systemic issues — because of course, our existences are more multi-faceted than that. Showcasing Black and brown happiness is integral to the perpetuation of it; I need to read stories and see images of unity in order to thrive. This becomes especially important when the the intersectionality of Blackness and queerness comes into play, which is why Jamal Jordan’s new book, Queer Love in Color, means so much to me.

In an age of dating apps and DM-sliding, I miss the meet-cutes and missed connections that play a role in the budding of queer love as I know it — and all of this energy is palpable on the pages of the New York Times photographer’s project. Jordan’s vibrant images detail friendship, courtship, marriage, and children of 40 queer couples of color. Images like this — true portrayals of Black queer people’s relationships — weren’t as accessible when I was growing up and it makes me wonder how much easier my journey might have been if they were.

Being marginalized as queer can be complex when you’re Black because validation sometimes comes in our proximity to whiteness because, in reality, too much “different” makes some people comfortable. That’s why you don’t often see our faces in mainstream gay magazines or ads for those Ibiza cruises unless were somewhere in the back of the crowd, like racially diverse poppyseeds on a plain Caucasian bagel. We are a niche within a niche, an afterthought.

Queer Love in Color was straightforward and simple as a concept, I’m told, but a radically beautiful idea in an America full of racial tumult: People of color committed to loving one another without the need for external validation. As I flipped through pages of people who looked like me, real and beautiful and flawed, I chuckled, I chortled, and definitely felt tears well up in my eyes.

Jordan tells Mic the story behind his inspiration for the book: An editor at the New York Times was curating a special section on queerness, and so Jordan took a look at their past issues to see how the Times historically covered queer and LGBTQIA+ issues. The answer was — as it was the case for more publications — not great. Although, to be fair, writers from the time have admitted their shortcomings in this regard: particularly in their handling of the beginning of the AIDS epidemic in the 1980s.

The problem, in part, appeared to be both representation and simply room to speak the truth. “There weren't even out people in the newsroom — and the history of the coverage in the paper was very sterile, whitewashed to a point,” Jordan says. Jordan’s commentary calls to mind the story of Jeffrey Schmalz, a white, Jewish staff writer for the Times who wrote about issues in the AIDS community toward the end of his life, when he was reportedly finally able to be open about his sexuality in a professional setting.

His story provides context for how boxed-in queer people of color feel sometimes: If a white man couldn’t be himself in his office — at a forward-thinking paper like the Times — imagine what it was like for queer people of color back then in their offices, in the very few instances they were even hired to work in them, that is.

Jordan’s book details more than queer love; it’s a symbol of freedom for folx like Jordan and I, regardless of how challenging it can still be for queer BIPOC to be themselves in the spaces they work and live.

While Jordan’s project is revolutionary, it came about by a very simple, universal dilemma: A an requited crush. “One day when I was at home, I was gestating about how sad I was about this boy that I had a crush on — he wasn't into me. Then I started to think about how, in college, I had this Tumblr blog where I would collect images of queer people of color,” Jordan says of the need to see people who look like you in popular media. “I said to myself, ‘I need an adult version of this,’” Jordan tells me, adding that he realized a collection of these types of images didn’t exist yet.

And so he took the reins. Queer love began as a viral New York Times article that led Jordan on a (pre-COVID) photography adventure that took him all over the world — 17 cities, he tells me, from South Africa, and back to his own backyard in Brooklyn. And for months that followed, even more queer couples contacted him to volunteer their stories and images (if he were to do, say, a book). “I think that it just had staying power after I published it,” says Jordan.

During his research, Jordan felt it crucial to capture stories from queer people of all ages, races, and body types. “I think that what rises to the top is often like, very normative, really buff Black guys who could probably be porn stars,” he says, adding that he met most of the people he chose for the book in public forums. Jordan’s book challenges the notion that every gay person looks like they could be leads in Looking, Will and Grace, or Queer as Folk. (with Pose in the media landscape now, there’s a bit more body representation — and cast member Billy Porter even wrote a blurb for the book.) Jordan says he found himself picking couples for the familiar, familial feeling they gave him. “I chose them when I thought they weren’t a professional model — but just a person, someone in my family or my friends,” he says.

It was inevitable for Jordan to stumble into a period of emotional growth while putting his book together. All of the stories affected him, but he tells me about one in particular: the one of Ameesha and Nina, a couple he met one afternoon in the middle of a windy Chicago street. “Their story includes the concept of magic moments,” Jordan says, after telling me about a concept from Paulo Coelho’s By The River Piedra I Sat Down And Wept. In the book, he says, the protagonist has the option of leaning in to these moments and therefore, change their own trajectory. “We usually don’t take [the moments], being forced to live such regimented lives in fear of change,” Jordan says. “Lately I’ve been thinking of stepping into those magic moments more lately.”

Speaking of magic moments, it’s important to know that while I’m interviewing Jordan, he’s in the process of picking up a lobster. “I’m having a celebratory lunch,” he tells me, as I hear the plastic takeout bag of seafood crinkle over the phone. Why is this seemingly unrelated detail important to mention in an article about book and queer Black joy, dear reader? Because lobsters are a part of queer, Black joy.

We deal with such heavy shit on a daily basis — bigotry from both strangers and our own families, microaggressions from friends, harmful stereotypes, and racism from our compatriots (both white and non-Black POCs). All that plus despairing news about LGBTQIA men and women of color today (especially Black trans women), makes me want to hide in my house forever.

Yet, while these realities are vitally important (and I continue to write about them too), our happier moments deserve the stage too. And sometimes that comes in the form of a 2-lb lobster to celebrate a milestone. Or shedding a few happy tears while reading a book full of jubilant, queer, Black and brown moments. Get it how you live, is the main takeaway here. And you’re entitled to live well.

More like this
Can CBN help you sleep? The science behind the trendy weed compound
By Melissa Pandika
Allergic to sunscreen? Here's what to do, according to a dermatologist
By Melissa Pandika
How will our pandemic trauma translate into emotional growth?
By Tracey Anne Duncan
Stay up to date