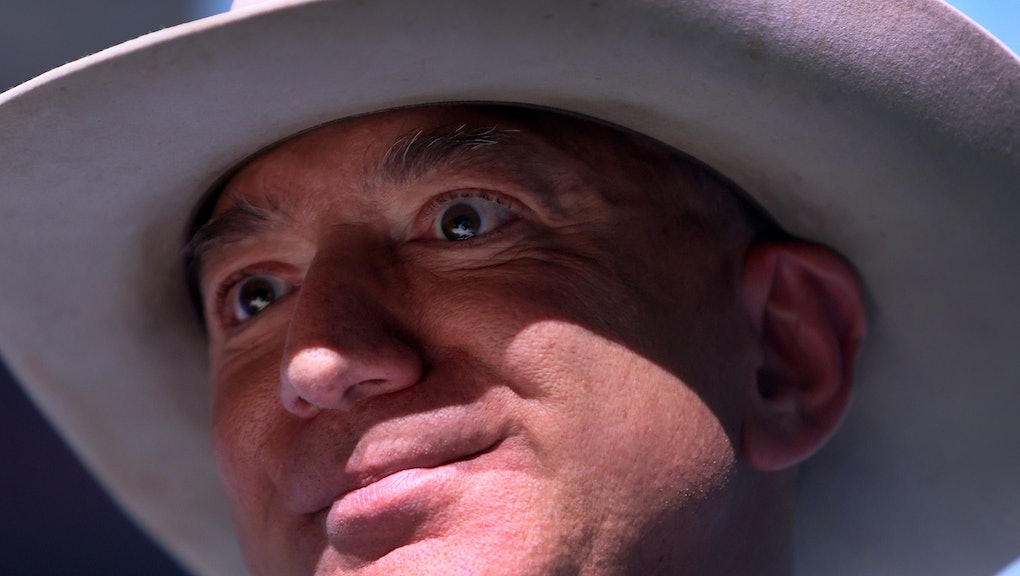 Jeff Bezos is too rich for one lifetime, so he's trying to live forever

An immortal billionaire with a space fetish sounds like the villain from a sci-fi flick that scored 38% on Rotten Tomatoes. Reality, unfortunately, is getting uncomfortably close to that movie. Jeff Bezos, a currently mortal billionaire, is apparently searching for the formula to preserve his youth — or even turn back the clock a little.

Imagine having more money than anybody has ever had at any time in history, and instead of addressing world hunger, you strive to become the human equivalent of an everlasting gobstopper. Amazon founder and Patagonia jacket aficionado Bezos is investing in Altos Labs, a tech company dedicated to discovering how to reverse the aging process.

A few months before Bezos stepped down as CEO of Amazon in July, he sent a letter to staff saying he would spend his time on his philanthropic pursuits and passion projects, such his space exploration company Blue Origin. When a plebeian such as I thinks of the term “philanthropy,” there are about 2,000 systemic issues that come to mind before reversing the aging process, from famine and water shortages to police brutality, global warming, and why McDonald’s ice cream machines are always broken. But hey, to each their own.

As MIT Tech Review reports, Altos Labs will primarily focus on a technology called “reprogramming,” which appears to work by adding proteins to a cell which essentially instruct it to “revert to a stem-cell-like state,” rejuvenating the cells in a body to become young again. Altos is reportedly poaching scientists from other research fields which mirrors the trajectory of its CEO, Richard Klausner, who was once chief of the National Cancer Institute. Offering these brainiacs paychecks as high as $1 million, according to the outlet. This shows that Bezos and Altos all want the world's best minds to keep their eyes on this very specific prize.

It makes sense then, that some of the nouveau riche scientists who are joining have themselves done freaky and dangerous things with their super powered minds. Some have taken cruelty to animals in the name of science to new heights, like Juan Carlos Izpisúa Belmonte, a Spanish biologist at the Salk Institute in La Jolla, California, who controversially has mixed monkey embryos with human embryos in the name of longer lifespans.

For context, this isn’t Bezos’s first anti-aging research crusade. In 2018, he invested in Unity Technologies, a biotech company whose goal is to create and discover treatments and medicines that could be used to stave off the diseases associated with aging.

If you think this particular billionaire is way obsessed with being young, Bezos isn’t the first Richie Rich to want to be immortal, either. Other monied white men desperately foraging time and space trying to grasp the one thing they do not own include: 53-year-old Peter Theil, who is also an investor in Unity, and has also expressed interest in parabiosis, an anti-aging treatment in which the blood of young healthy people is injected into older folks. Fun!

Naming all the rich people who have invested in achieving immortality would take years to recount, as there are stories of greedy ass folk that span multiple centuries. Unless there’s an island somewhere where undying magnates are all sipping mojitos and laughing at us like they’re watching M. Night Shyamalan‘s Old, they’ve all failed, too.

There are cautionary tales in literature about wanting to live forever, and Bezzy Boi should maybe pick up a few of them from his own bookstore: a children’s novel on many summer reading lists, Tuck Everlasting, points out that eternal life might be a lonely one, and might make a person use their time unwisely while they’re among the living. A 2011 novel by Drew Magary called The Postmortal illustrates that if most of us could live forever, we would run out of space and food at some point, because no one wants to die, but we all probably should, eventually. Other media, like television shows Westworld and Watchmen warn what could happen when you try to use your vast fortune to attempt to bend nature to your will, and it’s not pretty. By the way, none of these stories end happily ever after.

This is just my opinion, but I doubt Bezos gives two hoots about the common man anyway. Many of the proletariat work in his distribution center, and it’s no surprise that he hasn’t treated them fairly. So, like his Freudian, phallic ventures into space travel, this is likely just another way of him wanting to use this reprogramming technology on himself one day.

Maybe if Bezos would just enjoy the time he has with his obscene wealth, holding his loved ones, jet skiing like Obama — but also funding cures for diseases that make people’s lives shorter than they deserve to live — we’d be more sympathetic to him wanting to stick around on this planet for as long as he wants.

More like this
Studies suggest that Pfizer is no longer the cooler vaccine
By Ian Kumamoto
How to save your skin from climate change
By Melissa Pandika
Could fresh air be the key to ending the pandemic?
By Melissa Pandika
Stay up to date