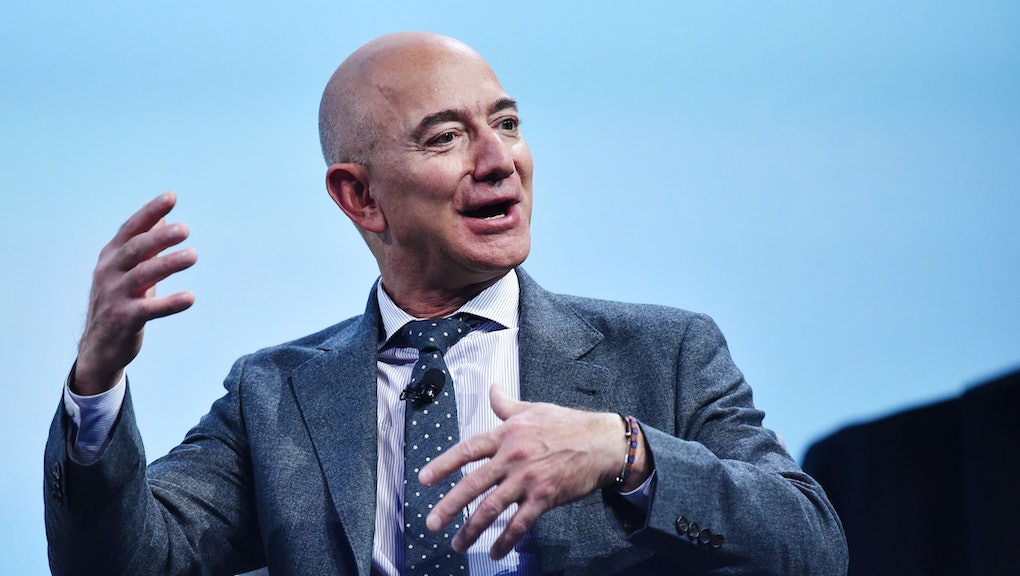 Billionaires just don’t seem content being billionaires. As if having an infinite amount of money — and the unique ability to never pay taxes — wasn’t enough, billionaires crave acceptance in mainstream culture. Even though they have enough money to never think about what regular people are doing again. Instead of flying a spaceship over the stadium or something, Jeff Bezos spent Super Bowl Sunday trying to endear himself to the American public by befriending beloved pop stars.

On Twitter, Bezos posted a selfie of himself with Lizzo, writing, “I just took a DNA test, turns out I’m 100% @lizzo’s biggest fan.” Not only is that caption one of the most cringe statements of the year so far, but Bezos’ appearance in the photo isn’t much better. While Lizzo is making the obligatory cute face she’d make for any fan asking for a selfie, Bezos is staring at the camera expressionless, eyes empty.

It’s unclear if Jeff Bezos thinks he can obfuscate his bad deeds by posing next to people who haven’t been accused of running a company with extensive labor violations, and who has not paid federal taxes on his billions of dollars of profit. But it’s hard to forget that he’s driven by greed and petty competitiveness. In 2017, Amazon launched a shameless campaign to locate its new Amazon headquarters in the city who could give the company the most incentives, including tax breaks. Bezos was driven to campaign for government incentives after watching Elon Musk get them in 2014 to build a Tesla factory in New Mexico. The effort ultimately failed, but it was a turning point in public opinion about Amazon and Bezos.

Since 2017, Bezos’s status as the world’s richest man has only earned him public hatred. Amazon is notoriously bad for the planet, and Bezos has billions of dollars that have gone untaxed. But he’s not the only billionaire who tried to make himself seem cool this weekend. Elon Musk wanted to be part of the internet zeitgeist and decided to release a short EDM song to his Soundcloud (Yes, he has a Soundcloud account). The song, called “Don’t Doubt Ur Vibe,” is four-minutes long, classified under the tag #Anime, and sounds like a bad version of the anonymous club songs you hear at bars with overpriced drinks. This isn’t the first time Musk has tapped into his love of music. He also released a song about the fallen chimp Harambe. That song was called “RIP Harambe.”

Like Bezos, Musk shared his photos of his “cool” activity to Twitter, though instead of posing with a famous musician, he’s posing like one. Shown seated in the studio in ultra-filtered photos, Musk could almost be mistaken for an actual artist.

Unfortunately for Bezos and Musk, no amount of money in the world can buy them out of their status as total dorks. It’s not like they need to be perceived as cool in order to continue on hoarding wealth like they are. But it makes me feel better knowing that even while they’ve got enough money to own much of the internet, they’ll never be accepted on it.