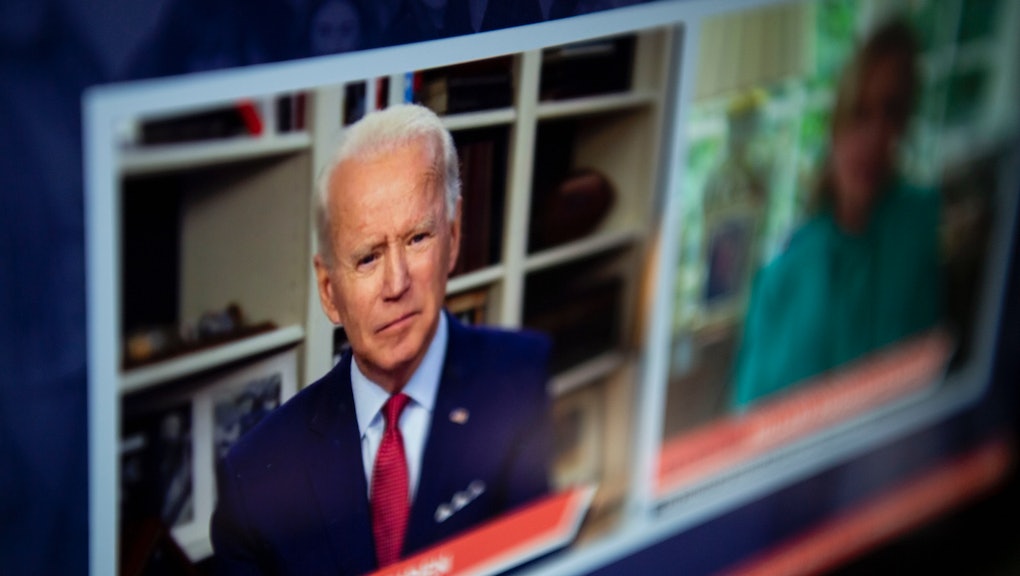 Joe Biden denies Tara Reade's claim, but says voters "shouldn't vote for me" if they believe her

The admission came as part of Biden's much-hyped appearance on MSNBC's The Last Word on Thursday night, where host Lawrence O’Donnell pressed the candidate on the credible allegations from former staffer Tara Reade that the then-senator had sexually assaulted her in 1993.

Asked whether he remembered Reade during his time in the Senate, Biden said, "I don't." He then immediately pivoting into the now familiar wording his campaign has been using in response to Reade's allegations, about the necessity to take women seriously when they claim that they've been harassed or abused — but also properly vet them.

"[Reade] has a right to be heard, but then it should be vetted, and the truth ultimately matters," Biden claimed, in a truncated version of his earlier statement on Reade's allegations. "I give you my word: It never, ever happened."

When asked by O'Donnell what he would say to voters who may be discouraged from supporting him as a result of Reade's claim, Biden tried to thread the impossibly small needle of projecting allyship while circling the wagons around his campaign. It did not go well.

Biden's statement gets to the heart of a moral dilemma currently engulfing Democrats: Can a voters in a party running against one credibly accused (and self-proclaimed) sexual predator calibrate their values to accommodate another?

Biden, meanwhile, seemed keenly aware of the apparent incongruity between denying the specific allegations against him and nevertheless presenting himself as a credible ally to victims of sexual abuse.

"I don’t want to question anything, other than to say the truth matters. This is being vetted. It’s been vetted,” Biden added later. “They went and interviewed scores of my employees over my whole career. This is just totally, thoroughly, completely out of character. And the idea that at a public place, in a hallway, I would assault a woman — anyway, I promise you it never happened."

Indeed, just hours after Biden's MSNBC interview, PBS NewsHour published an extensive investigation featuring interviews with 74 former Biden staffers — the vast majority of whom are women — into the workplace Biden created for his employees during his Senate days.

Many of those interviewed affirmed Biden's well-documented history of uncomfortable interactions with women, including excessive touching and trouble respecting personal space. As PBS NewsHour noted, though: "None of the people interviewed said that they had experienced sexual harassment, assault, or misconduct by Biden. All said they never heard any rumors or allegations of Biden engaging in sexual misconduct, until the recent assault allegation made by Tara Reade." (When The New York Times used similar language in its investigation of the claim against Biden, published last month, some pointed out that a history of unwanted touching might qualify as sexual harassment.)

Joining Biden for his MSNBC appearance was former Georgia gubernatorial candidate Stacey Abrams, who has been fully open about her desire to join Biden's ticket as candidate for vice president. Over the past several days, she has largely echoed Biden's claims about the sexual assault allegations against him. "I believe women deserve to be heard," Abrams told Vice TV earlier this week. "I believe their allegations deserve to be vetted. They deserve to have an investigation."

Late last month she affirmed her belief in Biden's denials, telling CNN's Don Lemon that: "I know Joe Biden, and I think that he is telling the truth and that this did not happen."

More like this
Biden's idea of filibuster reform is to bring back painfully long and boring floor speeches
By Vanessa Taylor
Nancy Pelosi took a stand on the Jan. 6 committee, and it left Republicans whiny as hell
By Rafi Schwartz
Arkansas's governor is very sorry he engineered a COVID surge in his state
By Rafi Schwartz
Stay up to date