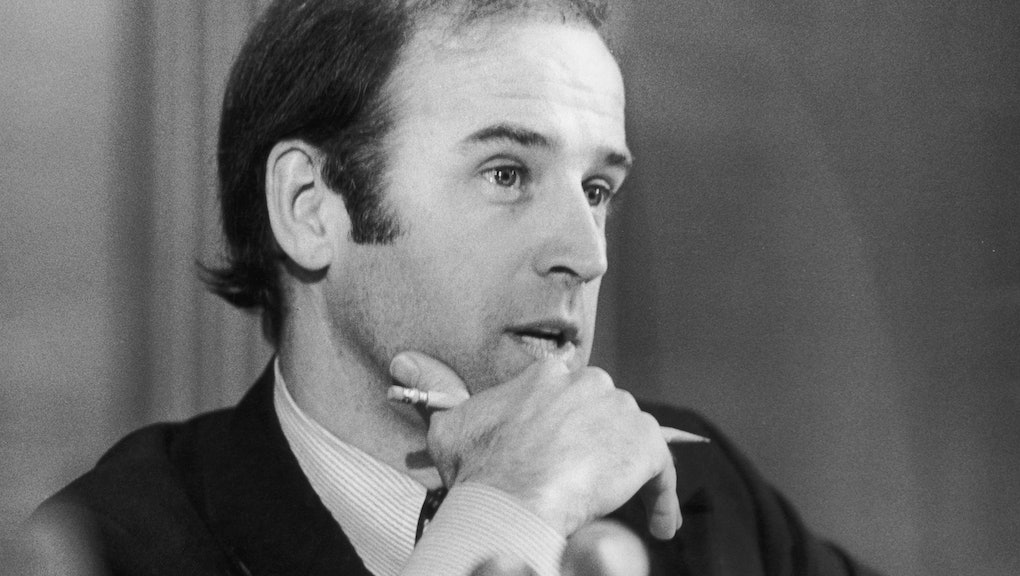 In late March, a woman named Tara Reade came forward with a claim that in 1993, Joe Biden sexually assaulted her when she was working as his staff assistant and he was a senator for Delaware. Reade is not the first woman to have come forward with an account of Biden touching her without her consent, but it is the first claim made publicly of rape by the former vice president.

One year ago, Reade told a Nevada reporter that Biden had sexually harassed her, and just over a month ago Reade appeared as a guest on journalist Katie Halper's podcast, where she expanded on her original story to include information of how Biden allegedly assaulted her. Reade's brother, Collin Moulton, and an anonymous friend came forward to corroborate Reade's story, saying that Reade had told them about the alleged assault "over the years," according to The New York Times.

The Biden campaign has denied Reade's claim, and both Democrats and Republicans have said that her story has too many holes to be true. But three new sources of information have appeared in recent days that lend further credibility to Reade's account.

A woman, Lynda LaCasse, who used to live next door to Reade told Insider that Reade had confided in her about the assault. "This happened, and I know it did because I remember talking about it." LaCasse said, explaining that that while Reade didn't name the vice president at the time, she described the circumstances of the assault and started crying.

"I'm for Biden, regardless. But still I have to come out and say this."

"She felt like she was assaulted, and she really didn't feel there was anything she could do," said LaCasse, who was Reade's neighbor in the mid-1990s. She specifically told Insider that Reade had mentioned specific details, ones she told Halper about in the interview last month: "I remember the skirt. I remember the fingers. I remember she was devastated," LaCasse said.

Mic reached out to Biden's campaign for comment on the new revelation but did not receive an immediate response. Spokeswoman Kate Bedingfield has previously denied the allegation on Biden's behalf, saying that Biden "firmly believes that women have a right to be heard — and heard respectfully. Such claims should also be diligently reviewed by an independent press. What is clear about this claim: It is untrue. This absolutely did not happen."

At the time, LaCasse said, she recommended that Reade file a police report. Reade finally did so just last month, nearly three decades after the alleged assault and well past the statute of limitations in Washington, D.C.; she said she took the step to protect her safety, hoping that the fact that filing a false report is punishable by law would lead detractors to believe her allegations.

LaCasse said that she decided to come forward purely to support Reade and that she intends to vote for Biden in the general election. "I personally am a Democrat, a very strong Democrat," LaCasse said. "And I'm for Biden, regardless. But still I have to come out and say this."

Leading up to the alleged assault, Reade claimed that working in Biden's Senate office had led to a number of situations that made her uncomfortable. She says that she told superiors how the then-senator's comments about her legs and the ways that he looked at her made her uneasy, but says her concerns were rebuffed.

A former colleague of Reade's, Lorraine Sanchez, has also come forward to support Reade's account. Sanchez said that while working alongside Reade in the mid-'90s for a state senator in California, Reade alluded to having been sexually harassed in Washington, D.C., at her prior work situation. Sanchez told Insider that after Reade opened up about her experience, she told Reade that "nothing like that would ever happen to her here in our office," but that she did not remember whether Reade named Biden or whether she offered specifics about the harassment she said she'd endured.

The final piece of evidence that has emerged in recent days is a video clip from a 1993 Larry King program called Washington: The Cruelest City on Earth?. In the clip, a woman's voice is heard asking King whether her daughter, a young female staffer, should speak to the press about a "story" that might paint a "prominent senator" in a bad light. The woman is Tara Reade's mother, who passed away in 2016 but had been told about the incident shortly after it happened. Reade confirmed to The Intercept that it was her mother who called into the program.

Reade's claim of assault by Biden has largely been drowned out by the coronavirus pandemic, as well as by the fact that Biden became the de facto Democratic nominee for president shortly before her story was picked up. All other Democratic candidates have dropped out of the race and aligned behind Biden in an effort to strengthen the Democratic Party in the hopes that Biden can oust President Trump in November.

Meanwhile, Democratic leaders, including Biden himself, have been silent on the issue — even those who have indicated previously a zero-tolerance policy for harassment and assault. So instead, we're left with a party standardbearer who appears unwilling to address a direct and credible claim of sexual assault against him — and beyond that, unwilling to combat at all the drip-drip-drip of damning information.