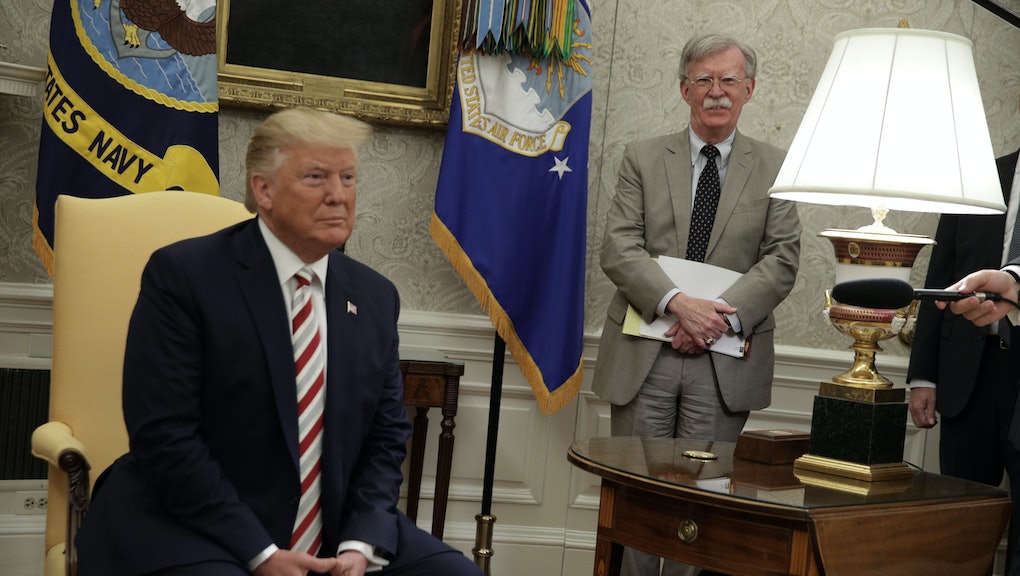 John Bolton's book may blow up the impeachment trial

John Bolton has, famously, never been someone especially concerned with the truth for its own sake. During George W. Bush’s first term, he claimed to be “confident that Saddam Hussein has hidden weapons of mass destruction and production facilities in Iraq.” In 2015, he would continue to argue that “the decision to overthrow Saddam was correct,” despite its false premises. He’s far more concerned with achieving results that fit his worldview, using information as just one more weapon to that end, no matter how critical or sensitive that information is. In the case of his intimate knowledge of the Ukraine scandal, the result John Bolton is pursuing seems to be making himself a lot of money, and the information he’s using as leverage to achieve that goal seems to be sensitive enough that the Trump presidency — or at least whatever tiny shred of credibility it still possesses — hangs in the balance.

On Monday night, The New York Times published a story revealing that in an unpublished manuscript of his forthcoming book about his time in the White House, Bolton claimed that President Trump did, in fact, condition military aid to Ukraine on the country opening investigations of Vice President Joe Biden and his family. Bolton’s team has lashed out at the White House for allegedly leaking a draft of the book to the Times; it sent the White House the draft for review several weeks ago.

In the draft, according to the Times, Bolton wrote that he had a conversation with Trump as recently as last August in which he expressed concerns about the delayed $391 million in aid to Ukraine. The funds had been appropriated by Congress — a routine annual disbursal of money ever since Russia’s annexation of the Crimean peninsula — but there had been a hold on their delivery. Whether the withholding of the funds was tied directly to Ukraine pursuing the Biden investigations is at the center of Trump's impeachment trial.

If Bolton really cared about the health of the American democracy, he would have voluntarily shared all the information he has with the House, so that it would automatically be part of the Senate trial whether or not he testified.

At the time, Bolton was Trump’s national security adviser and would have been intimately involved with the entire affair. Bolton claimed in the book draft that he discussed with other senior administration figures, like Attorney General Bill Barr and Secretary of State Mike Pompeo, the wild conspiracy theories that seemed to be fueling Trump’s approach to Ukraine — many of which were propagated by Rudy Giuliani, Trump’s personal lawyer. Bolton claimed that Barr and Pompeo privately agreed that Giuliani’s theories had no legitimacy, even as they now aggressively back the president.

But despite apparently having key knowledge of the events that spurred Trump’s impeachment, Bolton refused to willingly sit for a deposition in the House impeachment inquiry. He has stated that he will testify in the Senate trial if he is subpoenaed, but the odds of that have been small given the Republican majority in the upper chamber. These new revelations will likely raise pressure on Senate Republicans to call Bolton as a witness, though; on Monday, Utah Sen. Mitt Romney, who has been a lone voice in the Senate openly calling for Bolton to testify, signaled that he believed that were enough votes now to compel his appearance before the trial.

In a statement, Maine Sen. Susan Collins also indicated that she may also vote to call witnesses. "The reports about John Bolton's book strengthen the case for witnesses and have prompted a number of conversations among my colleagues," she said.

But Bolton's reticence has given Trump an easy defense. The two men parted ways acrimoniously last fall, and with a book on the way for Bolton, it's impossible to argue that Bolton is but an impartial man concerned about the state of affairs in his beloved nation. So, Trump denied his former national security adviser’s account on Twitter, claiming that Bolton was making up false accusations to sell books.

“I NEVER told John Bolton that the aid to Ukraine was tied to investigations into Democrats, including the Bidens," the president wrote. "In fact, he never complained about this at the time of his very public termination. If John Bolton said this, it was only to sell a book.”

While there is a large body of evidence to point that the fact that Trump is lying about the first two sentences of this tweet, the third sentence rings true. If Bolton really cared about the health of the American democracy, he would have voluntarily shared all the information he has with the House, so that it would automatically be part of the Senate trial whether or not he testified. By waiting to publish his book until after the trial is finished — the newly announced release date is March 17 — he gives the distinct impression that he’s using Trump’s misdeeds and resulting impeachment as nothing more than a press tour for his literary cash-in.

It’s an appropriately mercenary move from one of the key figures who sold us the Iraq war. Frankly, Trump has a point: Should we believe a guy whose testimony is apparently for sale?