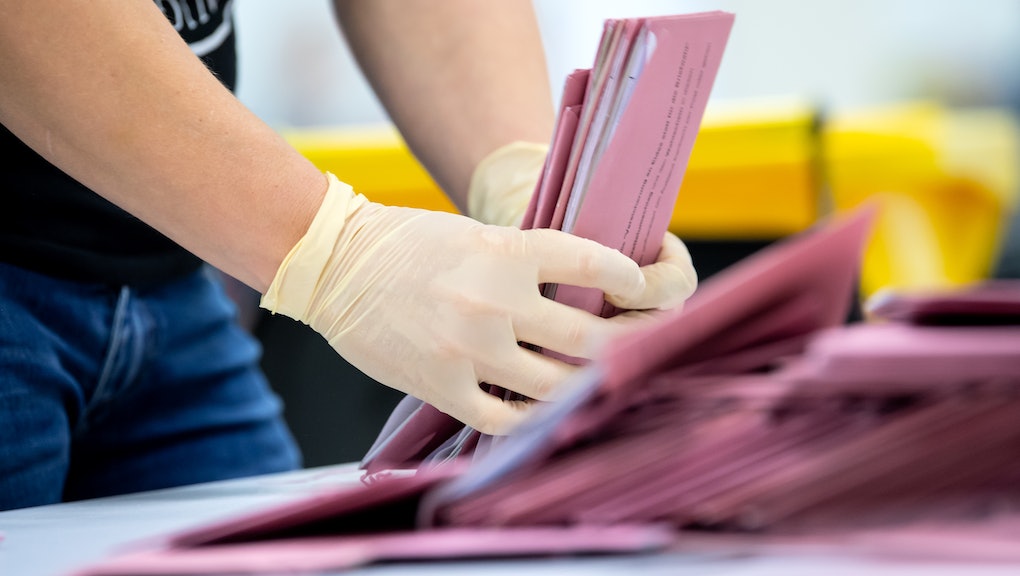 California's Sen. Kamala Harris wants more people to be like President Trump. That is, she wants all Americans to be able to vote by mail in November's general election, as President Trump did in the Florida primary just last month. This week, Harris introduced the VoteSafe Act, a $5 billion effort to bring the ballot box directly to voters. The goal, the senator said in a tweet, is to make "early voting, vote by mail, and safe voting a priority" as the coronavirus pandemic disrupts nearly every facet of American life.

Harris's VoteSafe Act goes further than the $2 trillion CARES Act relief ackage, which didn't actually mandate how states were to spend election funds. Across all states, Harris's bill would require election officials to permit no-excuse absentee voting, allow for 20 days of early voting ahead of Election Day on Nov. 3, and provide grants (which would account for half of the $5 billion) to improve "safety, efficiency, and reliability of polling places." Sixteen states currently restrict absentee voting access to those with a reasonable "excuse."

The CARES Act passed by Congress last month allocated $400 million for voting programs at the state level. But as Amber McReynolds, the director of the National Vote at Home Institute, said, the amount "does not even cover what it would take to print a ballot for every voter in the country. It barely covers pre-paid postage."

Harris is introducing her bill at a time when both the Republican and Democratic parties are working to address the impact the coronavirus pandemic will have on state primaries, the nominating conventions, and in six months, the general election. Most states have some form of vote by mail system in place, but many are woefully underprepared and underfunded to tackle such a large effort in so little time.

"It is going to be extraordinarily difficult to have an in-person election in the midst of a national pandemic, or as we are recovering from one," David Daley, the author of Unrigged: How Americans Are Battling Back to Save Democracy, told Mic in an interview for a separate story about voting by mail. "This is a really heavy lift in 200 days. It’s been years for them to launch and perfect these efforts and you know, in many cases, they’re still perfecting them now."

Harris's bill, at the very least, aims to protect the will of the voters at a time when officials seem to feel empowered to ignore it. "Voting provides the citizenry with a vital check on their elected officials," the bill reads, "and grants people the political power necessary to exercise and defend the rights guaranteed by the United States Constitution." In an election year, one of the more important political processes — voting — has also proved to be one of the most vulnerable.

There's plenty of evidence too that African Americans, Latino Americans, and Native Americans all face additional hurdles to casting their ballots, such as being subject to discriminatory voter ID laws, having fewer polling locations in their neighborhoods, being improperly purged from the voter rolls. It's all born out of the history of voter discrimination in the United States.

"Even before the pandemic, Native Americans, Black and Latinx voters, and voters with disabilities too often faced long lines, inaccessible voting locations, and outright hostility by election officials," Harris said in a press release introducing her bill. The voters who face the greatest number of obstacles to casting their ballot are also least represented in government, as Congress is still comprised mostly of older white men despite the fact that people of color will soon make up a majority of voters.

"Voting provides the citizenry with a vital check on their elected officials."

Harris specifically called out the need for greater voting access for marginalized Americans, but the reality is that absentee voting benefits everyone. It's a common thought that expanded absentee voting generally means more votes for Democrats, but a Stanford University study this month found that "expanding vote-by-mail does not advantage either party" and that claims of partisan advantage are "overblown." An MIT researcher found similar results last month, and additionally concluded that the public's trust in vote-by-mail elections is linked to whether or not their state has expanded vote-by-mail. In other words, if politicians get on board, voters do too.

Where things do get sticky is with signature requirements, which tend to work against voters for whom English is a second language, for instance. When you mail in a ballot, you often have to sign the document to affirm its legitimacy, and sometimes ballots can be rejected if the signature doesn't match the one on a voter's driver's license. Daley says that "a higher number of votes of young people and minorities are thrown out unfairly."

The VoteSafe Act is a blueprint for getting all 50 states on the same page when it comes to voting by mail. It's a road to establishing a much-needed national standard, to remedy to the patchwork of laws that exist now. The Wisconsin primary threw the need into stark relief: After legislators couldn't agree on vote-by-mail standards, voters were forced to choose between protecting their health by staying indoors or exercising their right to vote.

The Wisconsin election was also marred by depressed turnout, given how few polling locations were open due to coronavirus. An increased vote-by-mail effort would translate to fewer in-person polling locations and thus a lesser reliance on poll workers — typically elderly and retired people — allowing them to prioritize their safety.