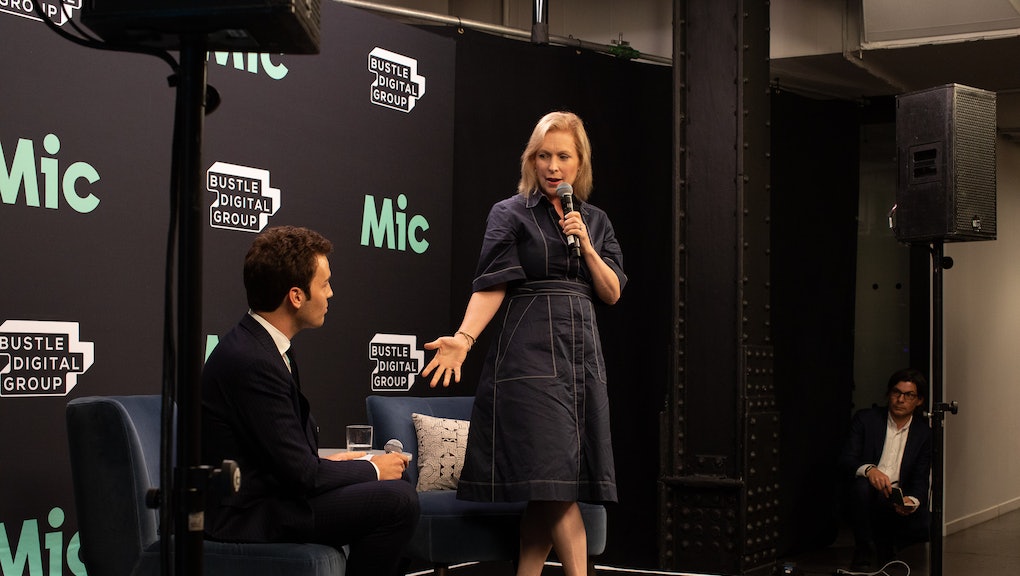 On Monday, July 22, New York Senator and presidential candidate Kirsten Gillibrand stopped by the BDG headquarters in New York, to speak with Mic's Editor-At-Large Jake Horowitz. During the conversation, Gillibrand was asked about her stances on some of the most pressing issues facing the United States today.

As one of the 24 people running in the 2020 Democratic primaries, Gillibrand is currently polling across the country at less than one percent, notes CBS News. On Monday night, however, she distinguished herself from her peers by giving some clear answers about why she wants to be president, and what she'd do on her first days in the Oval Office.

Below, we break down what Gillibrand had to say about different issues, and where she stands in comparison to other candidates.

On systemic racism and economic injustice

Gillibrand: "I would use my Small Business Administration specifically to help businesses of color, Black businesses get access to capital when they need it so they can not only create a business and thrive but accrue real wealth... I would also have basic postal banking... If you used every office post office in America to offer basic banking to people who don't have resources, they could have a checking account, they could have a savings account, they could get a mortgage, they could get a business loan."

Other candidates: Gillibrand is one of several candidates with a plan to specifically address the economic injustices that Black Americans face, but it noticeably doesn't include reparations, which have been endorsed by four candidates: Sen. Kamala Harris, Sen. Elizabeth Warren, Sen. Cory Booker, and Marianne Williamson.

Gillibrand: "I will pass comprehensive immigration reform with a pathway to citizenship... I have no problem funding border security, anti-terrorism, anti gun trafficking, anti human trafficking, anti drug trafficking... I would treat asylum seekers very differently. I would give them lawyers when they come to this country seeking asylum, I'd make sure there was a community-based system to take those families in, to treat them with the humanity they deserve.

Other candidates: Gillibrand's immigration proposals are fairly in line with the rest of her party. She is one of 22 candidates who supports citizenship for DACA recipients, and she also supports Julián Castro's policy proposal to decriminalize undocumented border crossings.

Gillibrand didn't always hold these positions on immigration, however. Early in her political career, she supported blocking some benefits for undocumented people and endorsed establishing English as the official language of the U.S. She has admitted that she was in the wrong for these previous positions.

Second, I think cash bail is a huge issue. The fact that so many people cannot make bail are incarcerated and they're incarcerated until their court date and our criminal justice system just isn't set up to actually represent everyone well. We need to make sure we're actually investing in public defenders and our criminal justice system so people have a fair representation under the law.

I wouldn't fund for-profit prisons. It's really disgraceful that we give public money to a for profit prison system who has no incentive whatsoever to make sure that a prison population don't become recidivists, don't become reincarcerated."

Other candidates: Gillibrand is one of nine candidates who have supported ending cash bail completely, and all of the Democratic contenders support decriminalizing marijuana. Ten have come out against funding private prisons, including Warren and Harris.

Gillibrand: "Executive action on the first day? Yeah, it's not a question... As Commander in Chief I would take the decision-making of whether a crime has been committed out of the chain of command and give it directly to a trained military prosecutor... I will change the rule on the first day."

Other candidates: Gillibrand is one of the leaders in the race when it comes to addressing sexual assault and misconduct. As senator, she has introduced legislation to address sexual assault in the military and on college campuses. She has also taken firm stances on men accused of sexual misconduct, even within her own party; Gillibrand was the first senator to call for Al Franken's resignation, a move that cost her some financial support but which she has stood by.

Gillibrand: "Pass the Green New Deal. It's not that hard... Invest in these things. Put a price on carbon. Drive investment towards renewables and efficiency, and entrepreneurs and innovators who are solving the problem, and tax polluters because they're actually contributing to global climate change as well as poor health."

Other candidates: The Green New Deal has nearly universal support from the candidates. Only two have not declared support for some version of the legislation: Rep. Tulsi Gabbard and former Colorado Gov. John Hickenlooper. Most candidates have addressed the urgency of climate change in policy proposals and have stated the need to bring the country down to zero carbon emissions within the next decade.

On money in politics

Gillibrand: "I think the necessary first step for all of this is actually having publicly funded elections, actually driving a campaign against money in politics, trying to put the power of this democracy back in the hands of voters ... because until we do that you will not get any of these things done... The quickest way to reduce their power in our system is have publicly funded elections and restore our democracy into the hands of the people."

Other candidates: Campaign funding has been a huge topic in the 2020 race. While many candidates have rejected donations from the fossil fuel industry, corporate PACs, super PACs, or federal lobbyists, Gillibrand — alongside Booker, Castro, Beto O'Rourke, former President Joe Biden, Warren, and Sen. Mike Gravel — are the only candidates to reject all four forms of major campaign financing and rely on grassroots donations instead.

On big tech and antitrust laws

Gillibrand: "I don't think that our antitrust laws are actually up to date enough to accommodate the realities of social media platforms. They weren't designed for what the economy of today looks like. I would direct my Department of Justice and have a thoughtful approach towards what should we be doing for social media, how should we regulate, how should we create oversight and accountability?"

On Trump's racist rhetoric regarding the Congressional squad

Gillibrand: "My perspective on President Trump is really simple. I think his attacks on these four women is racist, I think it's misogynistic and I think it's morally wrong. And what I would to say his supporters is exactly that, that why would you think dividing America on racial lines, on religious lines, on socioeconomic lines could possibly strengthen our country?"

Other candidates: Many of the Democratic candidates have released statements explicitly condemning Trump's comments and characterizing them as racist.

Gillibrand: "As a woman who is white, I have extraordinary privilege because of the color of my skin but also by the fact that I am a US Senator, the fact that I am running for president of the United States. My job as the senator from New York is to lift up voices that aren't necessarily being listened to and voices that aren't necessarily being heard.

Other candidates: This has been an area where Gillibrand has stood out from other white candidates. Earlier in July, she made headlines for explaining how white privilege works to a white voter who felt disenfranchised by the system.

Gillibrand: "I think the fact that Mueller's testifying is fantastic because the truth is his report was deeply damning. He outlined allegations and credible evidence of obstruction of justice that President Trump through many means tried to obstruct justice in this country. And so I think taking his testimony through the House of Representatives is the appropriate next step."

Other candidates: At least 10 other candidates have expressed support to begin impeachment proceedings against Trump. Most candidates support Mueller testifying before Congress.