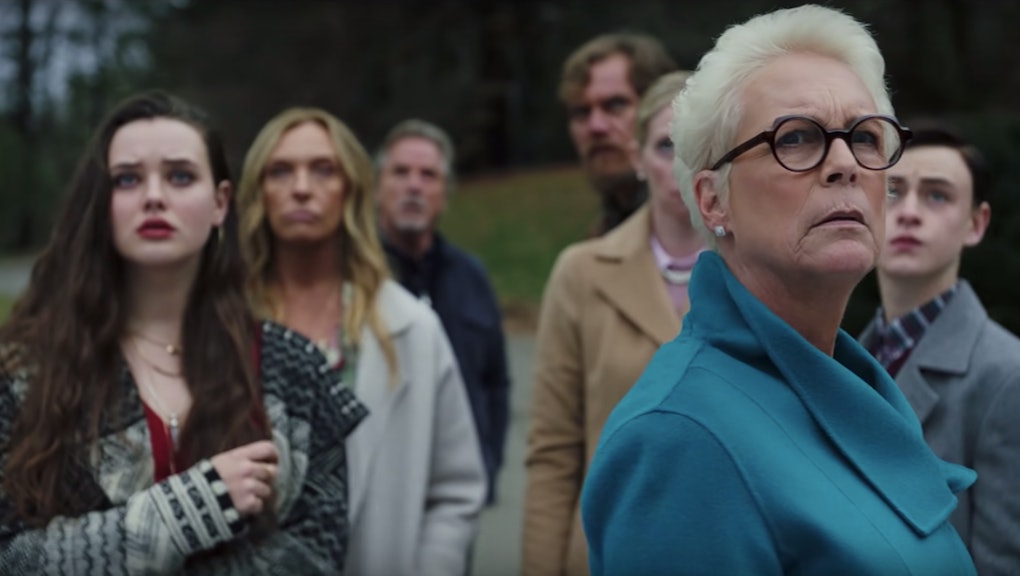 'Knives Out' knows only one truth: The rich have no loyalty

Thanksgiving is a time for gathering with family, eating one’s weight in turkey, sides, and pies, and, especially since 2016, squabbling over politics — assuming your racist aunt and uncle don’t leave the table an hour earlier than everyone else. Survival guides for the holiday feel hopelessly outdated. And with the impeachment inquiry picking up steam, 2019 may chafe harder than the last few years.

But as temperatures rise in the dining room, there’s one thing to be thankful for: Bad as your family may be, at least they’re not the Thrombeys.

Knives Out, the new movie from Rian Johnson (of Star Wars: The Last Jedi fame), drops the day before Thanksgiving, the timeliest date Lionsgate could’ve picked off of the release calendar. Any film about infighting between families suits the season, being as Donald Trump has ruined the holiday anyway with the relentless bloviations that spill from his chasmal gob. But Johnson’s film is a truly perfect fit, a zippy whodunit story about a pack of filthy rich brats scrapping over the fortune of their late father, world-renowned crime novelist Harlan Thrombey (Christopher Plummer), discovered in his study with his throat slit the morning after his 85th birthday.

The list of Harlan’s money-hungry dependents is extensive: his daughter, Linda (Jamie Lee Curtis), her husband, Richard (Don Johnson), and their son, Ransom (Chris Evans); his son, Walt (Michael Shannon), his wife, Donna (Riki Lindhome), and their son, Jacob (Jaeden Martell); last of all, daughter-in-law Joni (Toni Collette) and her daughter, Meg (Katherine Langford). They each expect their cut of his estate. But the police (Lakeith Stanfield and Johnson stalwart Noah Segan) are on the scene, accompanied by Southern gentleman detective Benoit Blanc (Daniel Craig). Blanc suspects foul play and interviews all of the Thrombeys — as well as Harlan’s caretaker, Marta (Ana de Armas), the key to Blanc’s operation. The mystery’s afoot; cue finger-pointing and frothing greed.

Knives Out is ultimately an immigrant story. The Thrombeys repeatedly tell Marta that she’s “part of the family,” a gesture that’d be graciously naive in normal times; these aren’t normal times, of course, so when they claim her as kin, the lie is self-evident. (In a running gag, none of them can definitively name her country of origin.) When a fireside argument erupts over the 2016 election, Joni being the obvious lefty surrogate and Richard the obvious righty surrogate, they ask Marta to cast the tiebreaker vote as their immigrant in residence. In the process, Richard praises Marta for entering America “the right way,” proclaiming that “America is for Americans.” Marta balks. She knows when she’s being othered.

What she doesn’t know is that in about an hour — at least in terms of Knives Out screen time — the Thrombeys will intimidate her into renouncing Harlan’s assets, which he leaves, in an act of benevolent spite, entirely to Marta in his will. Turns out he likes Marta best, and also that he’s the only decent human being with the name “Thrombey.”

But before that happens — before the family turns their daggers on kind-hearted Marta — they turn on each other.

For anyone keeping up with the papers, this is expected. The rich and powerful flip. They always flip. Paul Manafort, erstwhile Trump campaign chairman, flipped under pressure during the Mueller investigation to save his skin (which didn’t quite work). Michael Cohen, erstwhile Trump lawyer, flipped as well, a tragicomic turn of events for the guy who said he’d take a bullet for his boss. (Trump, to no one’s shock, reportedly made a casual anti-Semitic comment in response.) Trump family accountant Allen Weisselberg flipped. Lev Parnas, a businessman in cahoots with Rudy Giuliani, flipped, and Giuliani, Trump’s current legal adviser, is such an erratic goblin that he accidentally flips seemingly every day. And marching at the tail end of this Judas parade is Gordon Sondland, doltish hotelier, Trump-appointed ambassador, and Republican donor, who just flipped on the president during the impeachment hearings.

No wonder Trump thinks flipping should be illegal. His lineup of loyalists grows thin.

Eating the rich is all that the rich know.

So it goes with the Thrombeys, spinning fairy tales about their “self-made” successes as they take turns shoving one another under the bus Blanc is driving. They’re bereaved, sure — but they’re salivating over getting what’s theirs, too. Blanc questions them, and each of them deflects. Richard, whom Harlan knew was cheating on Linda, points to Walt as a possible suspect, citing a confrontation father and son had at Harlan’s birthday party. Walt denies the implication, but it’s hard to believe him when we’re shown that Harlan did fire Walt as the CEO of his publishing company. Joni, a vacuous wellness influencer, plays nice, but she’s been double-dipping on tuition payments for Meg for four years and Harlan, upon finding out, cut her off. Only Linda is guiltless, save for her boasts about building her real estate company from the ground up.; she leaves out the part about the $1 million loan Harlan gave her to get her started. Sound familiar?

Each Thrombey is out for themselves. Knives Out establishes their selfishness in two sequences that bookend the revelation of Marta’s unexpected inheritance. In the first scene, right before Harlan’s will reading, Ransom makes his boisterous entrance and immediately starts pissing everybody off. He’s like Eris tossing the Apple of Discord among the assembled throng, smirking in self-satisfaction as Walt screams in his face, Meg and Jacob trade political barbs, and Walt and Richard, the ostensible men of the household, get into a pitifully childish slap-fight. In the second scene — the reading of the will itself — the Thrombeys clutch their hands in greedy anticipation as if they’re waiting to hear that they’ve won the lottery, then bellow and wail in displeasure and disbelief at Harlan’s executor when he gives them the bad news. Piranhas in a feeding frenzy show more restraint.

Given that they’re content with lying to cover their keisters, the Thrombeys’ willingness to throw hands and assign blame comes as no surprise. Wealth is their bread and butter. They’d eat each other alive before wasting that meal ticket. And that’s Knives Out’s deceptively simple point.

None of the Thrombeys are themselves rich. They’re just the beneficiaries of a socioeconomic die roll; they’ve been feeding off of Harlan, the only truly wealthy man among them, for years. They strike when he dies because they smell blood, not out of self-preservation but rather habituation. It’s what they know. Of course they’ll do anything to hang onto their status, including sic immigration authorities on Marta’s defenseless mother. But that’s not because they’re untrustworthy; you can always trust the 1% to follow their own interests. It’s because eating the rich is all that the rich know.

More like this
The bittersweet success of 'Shang-Chi' after a year of pandemic-fueled Asian hate
By Brandon Yu
Even in death, Michael K Williams was, and still is, Brooklyn for life
By Keith Nelson Jr.
Live from New York: Revisiting the totally bonkers era of post-9/11 'SNL'
By Rafi Schwartz
Stay up to date