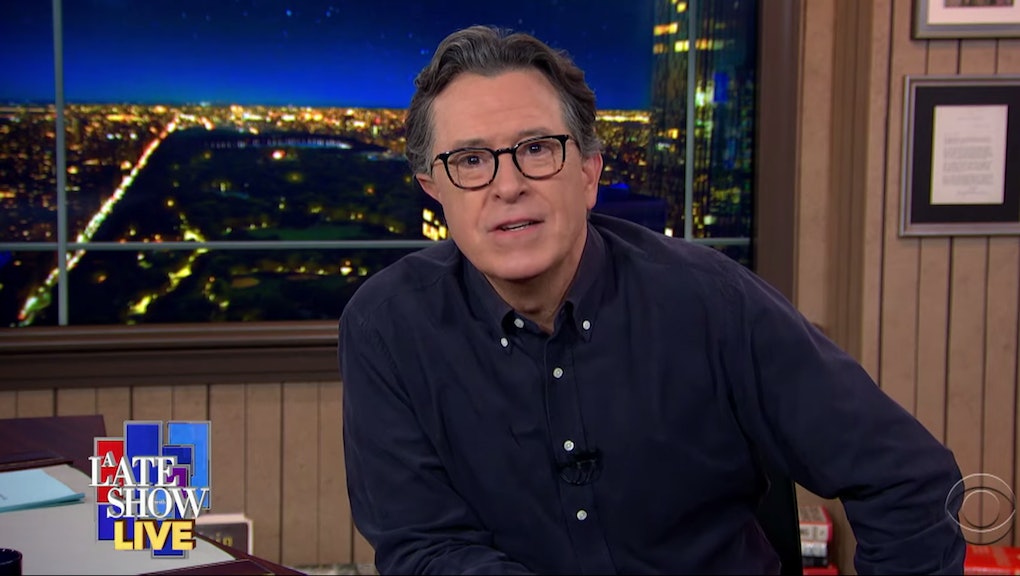 On Wednesday, while Trump supporters were storming the Capitol in a shameful coup attempt, I found myself wondering what the late-night talk show hosts would have to say about this embarrassing moment in American history. Because when tragedy rocks the country, we don’t tend to turn to political leaders or religious figures for comfort and context. Instead, the job of national grief counselor and moral compass falls — for better and worse — to comedians like Stephen Colbert, Jimmy Fallon, Seth Meyers, and the rest.

It wasn’t always like this. The granddaddies of late-night, like Johnny Carson and Merv Griffin, sidestepped politics and social issues altogether. But David Letterman famously assumed the role of national spokesman after the 9/11 terrorist attacks. He was the first to return to late-night, a week after the tragedy, and delivered a raw, somber eight-minute monologue that captured the national mood of grief and resolve. His successors (Colbert, Fallon, et al.) inherited the mantle of leadership — their roles magnified in recent years due to the vacuum of actual leadership from the Trump administration.

Last night, after a harrowing day won't be soon forgotten, Colbert went “unexpectedly live” and used his monologue to admonish Republicans who’ve enabled Trump’s brazen attempts to steal the election. “Hey, Republicans who supported this president — especially the ones in the joint session of Congress today — have you had enough?” Colbert began. “After five years of coddling this president’s fascist rhetoric, guess whose followers want to burn down the Reichstag?”

The Late Show host was scathing in his calls to punish those responsible for encouraging sedition. “Like you, Senator Josh Hawley, raising your stupid fist to the mob outside the Capitol. Look at that — it’s like ‘Black Power’ but the opposite. There really should be a name for that. And, obviously, he has to keep his fist closed, because if he opened it, you’d see all the blood on his hands,” Colbert spat, referencing a photo of the Republican senator from Missouri greeting the mob on Wednesday. His final line was a gut punch: “Remind me: Are we great again yet?”

The urgency and gravitas of Colbert’s live address set the standard for the rest of late-night. Also going live last night, Late Night’s Seth Meyers didn’t mince words: "I think it's important, as the first draft of history is being written, and as we're all processing what we witnessed today, to be as plain-spoken and clear-eyed as possible," he said in a six-minute broadcast. "What we saw today was a violent insurgency, an attempt to overthrow the legitimately elected government of the United States. And it was incited, directed, and encouraged by the president Donald Trump, and more than a few members of the Republican party and right-wing media."

On The Tonight Show, Fallon issued a short, jokeless statement to his viewers, saying he wanted to be of service: “Being here tonight and talking to you at home and reassuring you that we’re going to be OK and that this is not what our country is about is how I can help,” he said. British expat James Corden expressed hope on a dark day: “The America that so many aspire to will be back,” he said. “It’s just been hijacked by a lunatic.” Delivering perhaps the sharpest one-liner of the night, Jimmy Kimmel quipped, “Thank you for joining us for the treason finale of the Donald Trump era.”

Trevor Noah hasn’t come back from hiatus yet — when he does, we’re sure he’ll drop some truth bombs on white America. But The Daily Show’s Twitter account has been active. Conservative pundit Laura Ingraham posted a pixelated photo of one of the Trump supporters inside Congress with the caption, “Who is this?” Not missing a beat, the show quipped: “One of your viewers.”