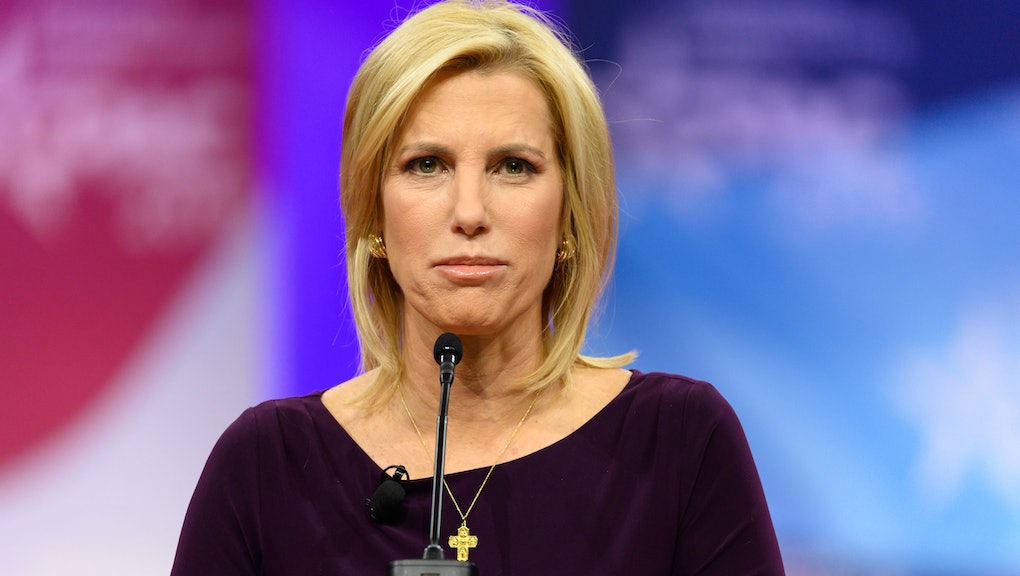 Have you ever had a couple different thoughts floating around in your head as you're drifting off to sleep, and then your brain melds them together into the strangest, most feverish dream? And then you wake up in the morning and just have to tell someone about it? It sure seems like that is what happened to Laura Ingraham, who has been dreaming up the latest conservative nightmare: government lockdowns because of climate change. And instead of telling these fictional dreams to, I don't know, a therapist, Ingraham has decided to dump them on her national audience of more than 2 million nightly viewers.

According to Media Matters, Ingraham has been working through these theories over the course of her last few Fox News shows. On her May 18 show, she asked guest and Fox News's resident Keebler Elf impersonator Newt Gingrich if the lockdowns imposed to limit the spread of coronavirus — a deadly pandemic that took nearly 600,000 American lives and is still ravaging some populations because people like Ingraham have fear-mongered about the vaccine — was actually just a test case for more government control.

"A lot of us have felt like this was a process long in the making of conditioning the public," she said. "When we realized it was mostly a vulnerable population that was really suffering from COVID, most people would tolerate it quite well. Nevertheless, these lockdowns persisted. Was this a conditioning process for the next lockdown?"

She expanded on this theory a day later, sharing with her audience the elaborate and baseless nightmares that have been apparently plaguing her. On May 19, she ran an entire segment on what she called "the coming climate lockdowns," in which she shared her fever dream where President Biden declares a climate emergency and forces populations into another quarantine. And while she admitted that it's unlikely that a true lockdown would occur, she still warned about various hypothetical policies that would "effectively lock you down," like ... installing bike lanes? Somehow, bike lanes are authoritarian to Ingraham. Seriously: She brought them up multiple times as an example of government an erosion of freedoms.

It's worth wondering where Ingraham gets the ideas that have started to fill her dream journal, and which she has so bravely been sharing on- air. Perhaps she's been falling asleep with other conservative talking heads rattling on in the background, because it turns out the theory of climate lockdowns has been floating around in the right-wing ecosystem for months now. According to Media Matters, climate denier Steve Milloy told Fox News host Jesse Watters last year, "Since the coronavirus pandemic started they’ve been talking about how we can go from a coronavirus lockdown to a climate lockdown." Marc Morano, the operator of climate denial website ClimateDepot, told Tucker Carlson in December that the Biden administration will "use the COVID lockdown model for the climate emergency model" and warned that the government will "go from COVID lockdowns to climate lockdowns."

Other conservatives have also gotten in on the game. In National Review, Wesley J. Smith of the Discovery Institute's Center on Human Exceptionalism — a real place that is not made up, no matter how much it sounds like it is — wrote, "You knew they would try to pivot off the draconian COVID policies and use climate change as the pretext to deploy the same rigid controls over our lives."

Shockingly, it seems mainstream conservative voices have actually managed to beat the fringes to this idea. But don't worry — the InfoWars wing of the GOP is still absolutely present. Alex Jones, somehow still on the air despite being sued into oblivion by people he has lied about, has joined the fray, as has his fellow grifting buddy Paul Joseph Watson. In recent months, both men have raised the possibility of a climate lockdown, which, according to them, is nothing more than a government power grab in disguise.

Here's the deal: Lockdowns suck. No one wants more lockdowns. And while the lockdowns that limited the spread of coronavirus did have a side effect of drastically reducing carbon emissions, the benefits were short-lived and unsustainable. This is not how anyone wants to actually fix this problem. But we're not going to be able to even try to make progress if people are pushing back against even the smallest changes, like more bike lanes. Ingraham and her fellow conservatives can fight back against reasonable and necessary climate policy all they want, but in doing so they will only guarantee that their nightmare comes to life: We'll all be locked inside, because the outside world will be a hellscape.

More like this
Another reason to legalize weed: It'll be better for the environment
By AJ Dellinger
The G7 countries promised to go green, then poured money into fossil fuels instead
By AJ Dellinger
GOP Rep. Louie Gohmert has some truly appalling questions about outer space
By Rafi Schwartz
Stay up to date