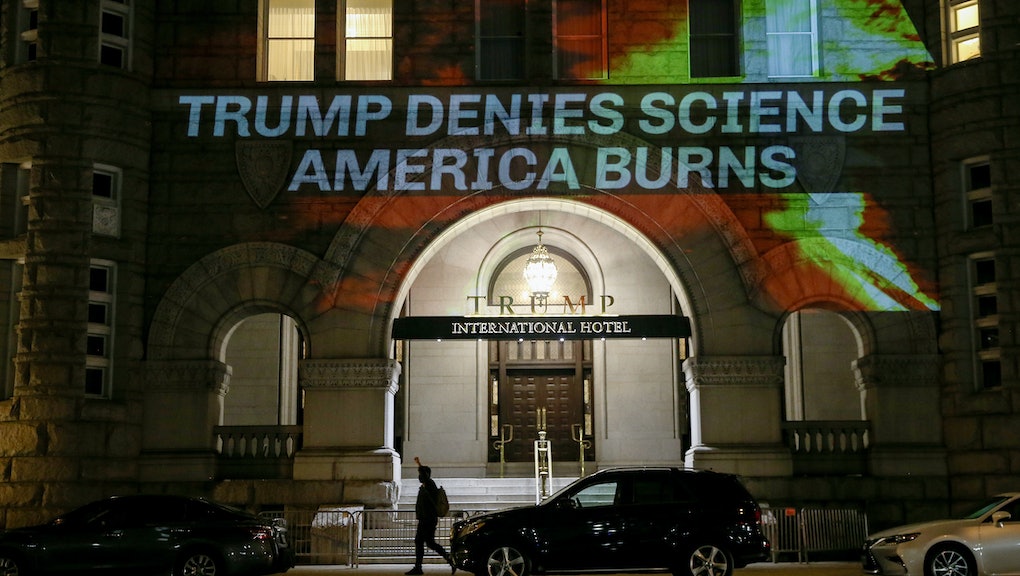 As of Wednesday, the United States is no longer part of the Paris Climate Agreement. It's one of the handful of promises President Trump has actually kept after criticizing the global accord as an economically "unfair" deal for the U.S. His condemnation in 2017 came despite the fact that the goals established by each country were voluntary, and he had the power to change them while still remaining part of the climate conversation.

Of the 195 countries that signed the accord, 189 ended up formally adopting its terms. The U.S. is currently the only country that has pulled out of the Paris Agreement.

But regardless of whether it's part of the agreement, the U.S. can't afford to ignore the affects of the climate crisis. Louisiana has been hit by five storms this year, and ridiculously dry conditions have contributed to hellish wildfires in California that continue to burn as of writing. U.S. citizens are even facing "climate grief" from the loss of livelihoods as a result of the destructive weather.

Yet instead of taking action, Trump has blamed states for their climate predicaments and questioned the existence of climate change. He has rolled back nearly 100 environmental protections and regulations during his four-year term. The president repeatedly criticizes renewable energy, spreading misinformation about its cost and destruction. He has also promised to plant trees while simultaneously leaning into the arms of fossil fuel producers for the sake of the economy.

“I feel that the United States has tremendous wealth," President Trump told the press last year while skipping a G7 meeting on climate change. "The wealth is under its feet. [...] We are now the number one energy producer in the world, and soon it will be by far."

Many conservationists have realized by now that the Trump administration is no friend to science and the environment. But there's hope that a new president could reverse some of the damage done. Former Vice President Joe Biden has already promised to rejoin the Paris Agreement if he's elected into office. However, as The Guardian noted, a Republican-controlled Senate could stunt his efforts to regulate carbon emissions, and resist any push toward renewables.

Despite the U.S.'s withdrawal, other countries who adopted the accord are trying to fulfill their commitments.

"The big picture is that Paris will continue, come what may," Pete Betts, former lead climate negotiator for the EU and UK, told The Guardian. "Although I don't think anyone will follow Trump, if you've got the world's biggest economy and second-biggest emitter saying it doesn't want to take action itself — it is a little bit of a dampener on ambition."

If President Trump is re-elected, the U.S. can expect more of the same disregard for environmental protections. States will be left on their own to lower carbon emissions and possibly end up fighting against the federal government to keep regulations.

And the U.S. might be left out of international conversations, restricted from voting on important climate decisions because it's not part of the group. The withdrawal actually stifles the U.S.'s power, allowing other countries to take the lead.

The EU is trying to create its own Green Deal. China has already pledged to become carbon neutral by 2060. Japan wants to go net-zero by 2050. South Korea joined the race, aiming to go carbon neutral by 2050. Analysts have warned Australia — another fossil fuel-loving country that regularly trades gas and coal with Japan — that its economy will suffer if the country doesn't recognize the lowering global demand for fossil fuels.

That same warning could extend to the U.S. if the country continues to insist on ignoring the world's climate emergency.

More like this
Another reason to legalize weed: It'll be better for the environment
By AJ Dellinger
The G7 countries promised to go green, then poured money into fossil fuels instead
By AJ Dellinger
Nearly 40% of heat-related deaths are directly due to climate change
By AJ Dellinger
Stay up to date