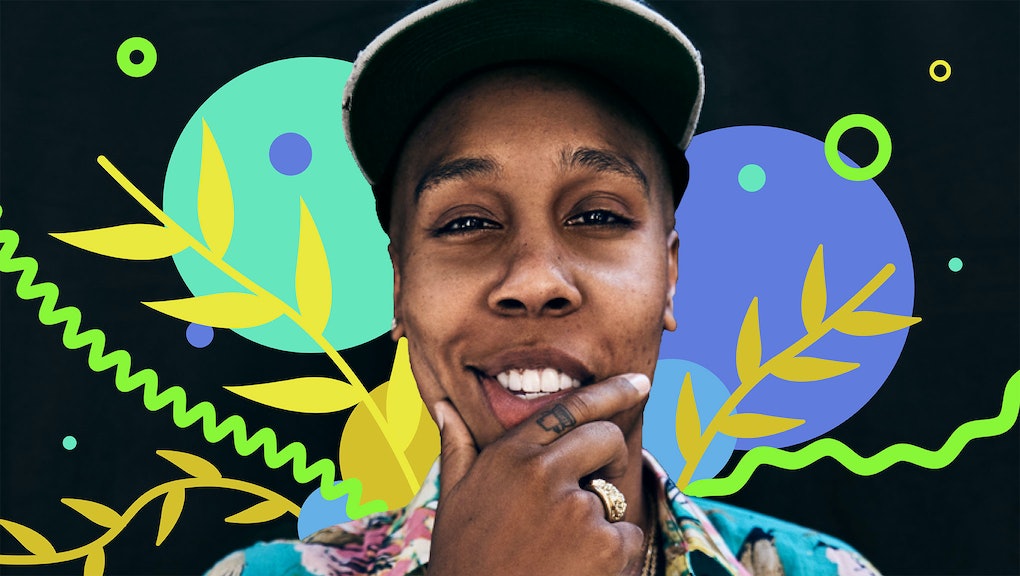 “We’ve been busy. This is what we do. We pump stuff out. We make work that we hope will cause conversations, ruffle feathers, and make people see themselves in different ways. It’s been an exciting time.” This is the greeting, and unofficial mission statement, from actor, writer, and producer Lena Waithe, who has indeed, been pumping stuff out, ruffling feathers, and causing conversations. Originally from Chicago, she came to prominence in 2017 via the Netflix series Master of None, which she both wrote and performed in. Based on Waithe’s own coming-out story, the show's “Thanksgiving” episode tracks her character Denise’s years-long process of coming out to herself, her friends, and eventually, her accepting family. The episode went on to win an Emmy, making Waithe the first Black woman to win for comedy writing. She followed that up with her first television series as a creator, Showtime’s The Chi, an ensemble piece about a wide swathe of Black Chicagoans and the sometimes tragic ways their lives intersect. Since then, she’s appeared in the blockbuster Ready Player One and in a smaller role on This Is Us; in 2019, her first feature film for which she served as writer, Queen & Slim, premiered. In each role, whether on-screen or not, her essence — laid-back, self-possessed, actively and openly Black — has shone through.

But it’s as an executive where Waithe has really begun to excel, having gone from sometimes actor to full-on enabler of other people’s dreams in just a few years. Her company, Hillman Grad Productions (named after the fictional college in A Different World), is behind half a dozen projects that Waithe has been either directly involved in, or otherwise shepherded, including Radha Blank’s Sundance prize-winning The 40-Year-Old Version and the BET series Twenties. Fresh off a $100,000 donation from Häagen-Dazs that's part of the brand's larger $1.5 commitment to underrepresented tastemakers, Hillman Grad just announced the 25 participants in its inaugural Mentorship Lab, which provides a free 10-month training experience for marginalized creators in acting, writing, and executive development.

The Mentorship Lab was a natural extension of the practice Waithe already had in place of trying to help out young creators where she could. “We were already in plans to do a mentorship program, which we had talked about for years,” she tells Mic over a Zoom call. “I didn’t mind funding things myself because I’d rather do that than wait. But luckily, when you build something, people will come.”

“I’ve definitely seen Black women who have to do it without a whole lot of help or support, and really with a lot of pushback. A few more doors have been opened, but it’s still very much a male, white-dominated industry.

Mentorship played a significant role in Waithe’s own career, having assisted on projects by directors Gina Prince-Bythewood and Ava DuVernay — both older and more experienced yet who also faced challenges as Black women in the industry. DuVernay made her first film on only $50,000, and Prince-Bythewood struggled to get several of her features green-lit, including the ultimately successful Love & Basketball. “I feel what’s discriminated against are my choices — which is to focus on people of color and more specifically women of color,” Prince-Bythewood said in an interview with NPR. “Those are the films that are not getting made and those are the films that take a lot more fight.”

“I’ve definitely seen Black women who have to do it without a whole lot of help or support, and really with a lot of pushback a lot of the times,” Waithe tells Mic. “A few more doors have been opened, but it’s still very much a male, white-dominated industry.” In just the last handful of years, both the Oscars and the Golden Globes have been criticized for bouts of all-whiteness — from the acting categories in the first case, to the voting board in the latter; abysmal statistics collected by the gender advocacy group Women and Hollywood show that even most speaking roles, over 70 percent, went to men in 2019’s 100 top-grossing films.

The Mentorship Lab, then, is a place for the marginalized. There are no specific criteria for what constitutes a marginalized person, though Waithe says, “If you’re not a white male, you are othered in a way” — and the participants reflect that — Black, brown, queer, nonbinary; mostly young, though some less so.

Beyond the overwhelming whiteness and maleness of the entertainment industry, Waithe also saw an issue with the LA-centric, come-with-funding, know-somebody-who-knows-somebody setup. Though she understands the importance of relationships in community-building and creating projects, she’s sought to make the Mentorship Lab a nepotism-free environment.

“So many people were hitting me up like, ‘Hey, my friend applied.’ I said, ‘I cannot take this into account.’ Because that’s the old way of thinking, like because this person knows you, and you know me, it gives them this leg up. And it shouldn’t. A lot of these people I don’t have hardly any connection to and I think that’s great.”

Still, meritocracies are hard to create and can be even harder to enforce. And even with the help she’s received and given over the years, Waithe has no illusions about the rarity of what she gets to do for a living. “I’ve always said that being able to be in this business is a privilege and it’s a luxury.” For Waithe, that luxury was partly funded by her mother, who helped with her bills in her early L.A. days, something she shared openly in 2018.

Waithe’s openness is readily apparent in almost everything she says and does. She seems authentically herself in any setting, disinterested in code-switching, whether cultural, professional, or otherwise. The characters she portrays on-screen, such as Denise, and Helen in Ready Player One, often match her own relaxed demeanor and sense of style — baseball caps; clothes that look comfy yet expensive. During our phoner, she is chatty, conversational, easy-going. All this means that when it comes to the feather-ruffling aspect of her work, she is ready with answers.

I think there’s this idea that most artists just want to be liked and I think people that are too liked are often forgotten.

Though it’s in her creative projects that she’s wanted to cause conversation, there have been several off-screen moments in which her choices were scrutinized. In 2019, Jason Mitchell, the lead actor from The Chi, was fired after allegations of on-set harassment came to light. Waithe’s role, and how much power she had to change the environment, came into question. “I don’t have the power to fire anybody… I don’t own The Chi. I created it. I sold it. I could be fired off The Chi.” She went on to say, “I was trying to put people in power to change, but ultimately that wasn’t the answer. I’m always the answer, and that’s the biggest lesson I’ve learned in all of this.” Later that year, Queen & Slim also ruffled feathers, from the original casting description for the character Queen (“If she were a slave, she would’ve worked in the fields”), to the film’s finale (spoiler), in which the two fugitive characters are violently shot by police in a panoramic shower of bullets, a decision Waithe stood by. “I didn’t want to give us some fairy tale because the mothers of the movement didn’t have that,” she told Refinery29. “We [as Black people] don’t necessarily have the choice or the option to live long lives and become the people we were meant to be.”

Hillman Grad’s latest project, Them: Covenant, a new series coming to Amazon Prime for which she serves as executive producer, hasn’t been immune to flak either. Some have called out the show for its lack of Black directors telling the story of a Black family. But this, Waithe says, without defensiveness, was creator Little Marvin’s call, not her own. “As a producer, it’s not my job to tell him what to do," she tells Mic. “I can’t tell him, ‘Hey, go against your instincts, don’t hire this person.’”

The same was true, she says, for The 40-Year-Old Version. “Radha will tell people in a second that I got out of her way. Most people would have told her, ‘Don’t shoot it in black and white. Maybe don’t star in it and direct it. Maybe make it shorter. Maybe change the title.’ And I said to her, ‘I think you should do all those things. Those things make it interesting.’”

If you look at the ever-expanding terrain of Waithe’s career, it’s easy to see where “making it interesting” figures. She says it’s kind of the point.

Ultimately, she says she wants to follow words of wisdom from her friend Daniel Kaluuya. “I asked [him], what do you consider when you’re looking at your next part? And he said, ‘Something that scares me.’ And I thought, Wow, that’s a great way to live.”