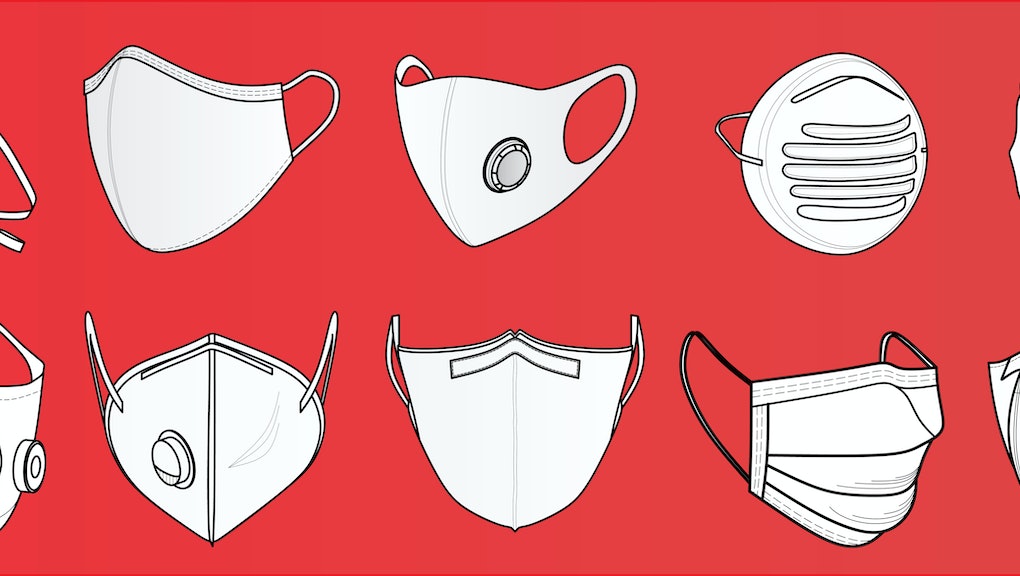 Lenka Koloma believes being anti-mask is a righteous cause. Who can convince her otherwise?

On Aug. 6, Liz Chavez, an assistant manager at Mother’s Market & Kitchen in Laguna Woods, California, approached a pair of women browsing the aisles unmasked. In keeping with Mother’s Market’s posted store policies, Chavez asked the women to put on masks or leave the premises. In response, Chavez was rebuked by her customers and informed that in fact it was her who was violating the rules — in this case, their constitutional rights. The shoppers further claimed that Chavez could go to prison for up to five years for asking them to wear masks, and that she could even be sued.

As states have started ramping up their coronavirus guidelines as winter approaches, and an end to the now eight-month long outbreak remains nowhere in sight, anti-mask sentiment is as prominent as ever. Chavez isn’t the only person, and certainly not the only essential worker, to be confronted by anti-mask logic, though she may be one of the best-known.

Lenka Koloma, founder of the Freedom to Breathe Agency and the ringleader seen accosting Chavez on TikTok, is well-known too. Koloma created the group during the pandemic on the basis that, per the group’s website, “breathing is a vital biological activity to physical and emotional well being,” a statement no one has contested throughout the pandemic. “You can live without food for two months, without water for two days,” Koloma tells Mic, “but without oxygen for a short period of time, there are plenty of studies [that show] why oxygen is so crucial for your body.” Koloma’s fight against masks is thus, she believes, a righteous campaign against mandating that people obstruct their tracheas or breathe in recycled bacteria trapped by their masks.

But masks don't actually cut off oxygen or overexpose wearers to carbon dioxide. Nor are they equivalent to petri dishes strapped to your face, and they’re not too loosely woven to stop folks from inhaling coronavirus particles. Masks work. That’s why California’s COVID-19 website states that people “must wear face coverings when in public spaces, especially indoors and other areas where physical distancing is not possible.” The mandate is clear: If you leave home or work directly with customers, or if you’re in any indoor public space, wear a mask. But Koloma claims that “there is no such thing” in California as a mask mandate, and also that California’s mask mandate “isn’t a law,” but “a suggestion.”

The threads of FTB’s case against masks unravel quickly, if you bother to look at the actual facts. But arguments against mask-wearing are extremely similar to the arguments anti-vaxxers make, in that they both rely on a specific and intentional denial of science. Koloma claims scientists belonging to FTB have performed their own independent research on COVID-19, but the organization’s site doesn’t have any indication this research exists.

Regardless, what’s more troubling is the legal language Koloma uses to justify herself. People like Chavez — essential workers simply doing their jobs and following both state and store policies — are “playing the doctor and basically practicing medicine without a license,” Koloma claims, adding that those workers enforcing those policies are in breach of California civil code 52, which allows the California attorney general, district attorneys, or city attorneys to bring civil action against people interfering with others’ exercise of their Constitutional rights. (In a great twist of irony, one could argue Koloma is playing lawyer and practicing law without having passed the bar exam.)

The precedent that public health and safety take priority over everyday law goes back centuries.

In Koloma’s view, Chavez broke California’s laws and is therefore the guilty party in the Mother’s Market incident. “It’s a misdemeanor or felony,” Koloma claims. “It's up to a couple of years in prison and a very steep fine. So that's a major violation, and so that’s what's happened in the video.” But the law isn’t written for a circumstance like a viral outbreak. It’s written to protect people from being asked to leave a store on the basis of race or gender, for example, and Chavez is on video clearly asking Koloma to leave because she isn’t wearing a mask.

Pushed further, Koloma says that “we were educating the assistant manager on her violation of our civil and human rights.” She says Chavez was “uninformed”; people, she asserts, should know the law. To her, apparently, the Constitution protects her right to do what she wants without being inconvenienced by science, law, or empathy.

In reality, the Constitution isn’t a factor here at all. The precedent that public health and safety take priority over everyday law goes back centuries. “Some of the earliest laws in the United States, in fact even in the world, dating back to the 1300s, related to protecting the public's health and safety,” explains Michele Goodwin, a founding director of the Center for Biotechnology and Global Health Policy and a professor at the University of California at Irvine with specific expertise in bioethics and constitutional law. Remember the great, aspirational immigrant narratives we’ve erected around Ellis Island and Angel Island? They were in fact quarantine centers. “While there may be a variety of laws that might be on the books that from day to day allow us to assert our constitutional rights,” Goodwin notes, “those laws are then modified against certain laws that might trump them.”

Under normal circumstances — a.k.a. when there’s not a pandemic — Koloma’s complaint would be valid. The state cannot, as an example, ship random folks off to prison during a public health emergency, nor can it require people to shelter in place when there isn’t a highly transmissible virus floating around making people sick. “But of course,” Goodwin tells Mic, “we do know that we are in COVID. We know that it is real. We know that people are dying.” The country has 270,000 death certificates and counting to prove it. Civil codes exist for a reason, but under such extraordinary circumstances as these, the legislation in question is superseded by the state’s directive to protect the public.

None of this is new. Go back to 1905 and Jacobson v. Massachusetts, in which the Supreme Court ruled that Cambridge’s Board of Health had the authority to require smallpox vaccinations during an epidemic. Present-day mask mandates follow that court opinion. Anti-mask individuals or groups thus are at best wrong in their understanding of state legal structure, and at worst defying state mandates and long-established laws.

Sans official word on whether what Koloma did was wrong, there’s nothing to stop her or sympathetic others from doing the same.

No charges were ever brought against Koloma, so we’ll never know whether she was in fact breaking the law. Her punishment appears to be relegated to a bit of social media shaming — and while arguably that's valuable in its own right, it isn’t the same thing as a police report. Increased reliance on police is currently an unpopular practice, but the Orange County District Attorney’s Office, which would have had jurisdiction over any case related to the Mother’s Market incident, tells Mic that in the absence of a police report, it can’t comment on the legality of Koloma’s actions. And sans official word on whether what Koloma did was wrong, there’s nothing to stop her or sympathetic others from doing the same.

The DA’s office did mention that private businesses, coronavirus or not, have the right to require certain things of their patrons. (Remember “No shoes, no shirt, no service”?) Most of all, TikTok videos are a poor substitute for the authorities, loathe as we may be these days to involve them given the constant acts of police brutality and violence committed across the country. Goodwin is keenly aware of the complications of contacting the police, but tells Mic that “calling law enforcement is probably the right answer” when dealing with public mask violations, for the sake of public health. If a person enters a grocery store without a mask on, and if that store then shuts down because an employee falls ill, then the entire community loses access to basic goods, let alone the costs of health care for that employee and anyone else who contracts the virus from the store.

“Law enforcement is able to use discretion,” Goodwin says, “and we want them to use good judgment. Not everything should call for someone being arrested for a particular thing.” The police don’t have an obligation to act, either, and it’s entirely possible that in the Mother’s Market situation, no arrests would have been made. (If you want to make yourself mad today, listen to RadioLab’s “No Special Duty” episode.)

However, Kristina Roth, a senior advocate for Amnesty International USA and co-chair of the Justice Roundtable Law Enforcement Reform Working Group, is clear: “Using law enforcement to ensure compliance with health mandates should be considered only as a last resort.” Roth notes that at the onset of the pandemic, police were called upon to enforce mask mandates — and it led to disproportionate policing in communities of color. “The concern with involving law enforcement is that it could lead to the same biased and excessive enforcement seen in historically overpoliced communities,” she tells Mic. And of course, if people are arrested or detained for mask violations, they’ll enter a carceral system where infection rates are much higher than they are among the general public.

That’s why anti-mask actors like Koloma are so tough to handle. And instances may well arise where calling the cops on the Kolomas of the world is the answer; at the very least, it might mean sparing folks like Chavez from being intimidated at their places of work. But absent clear legal violations, the unfortunate reality is that anti-mask efforts like Koloma’s nestle into a uniquely American gray area: They aren’t outright illegal, and worse still, they’re predicated on a willfully manipulated vision of American liberty.

More like this
Jailhouse lawyer Johnnie Cook is fighting for pandemic justice
By Mai Tran
These organizers are fighting to make sure non-English speakers get vaccinated, too
By Vanessa Taylor
New York will finally offer vaccines to all inmates, after a judge's order
By Vanessa Taylor
Stay up to date