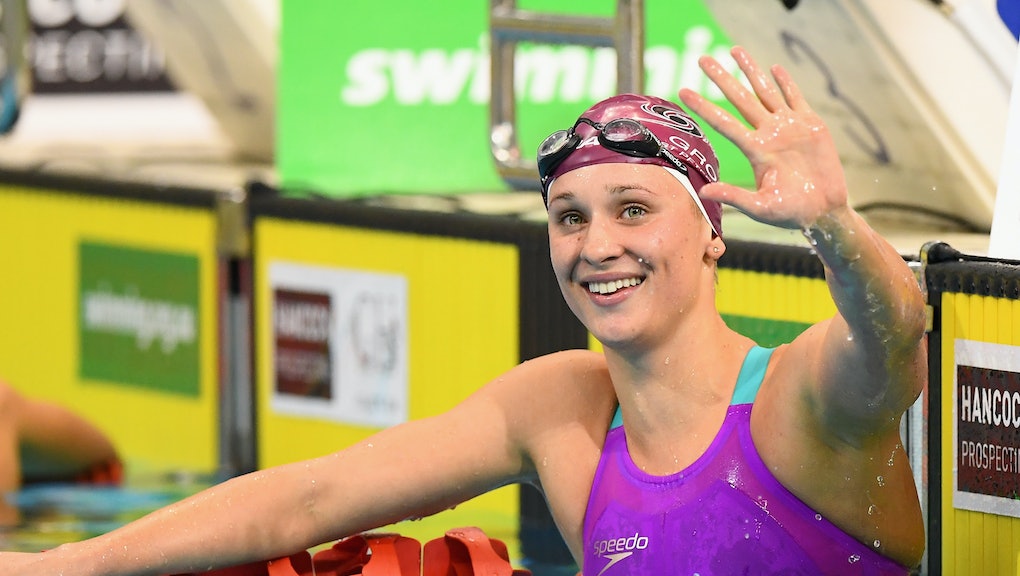 In a shocking rebuff to "all misogynistic perverts in sport," Australian swimming star Maddie Groves is boycotting her country's Olympic trials, meaning she won't be competing at the 2021 Games. The 26-year-old butterfly specialist won two silver medals at the 2016 Rio Games five years ago and was slated to make Tokyo her second Olympic outing. Instead, she's sacrificing her own shot at glory to make sports safer for her fellow female athletes.

Groves announced her decision to withdraw on social media Wednesday night, just days before the Australian swimming trials begin this weekend. (If you look closely, you'll notice she wore a swimsuit patterned with cartoon hands giving the middle finger.) She emphasized her point on Twitter, writing, "You can no longer exploit young women and girls, body shame or medically gaslight them and then expect them to represent you so you can earn your annual bonus. Time’s UP." Her announcement drew widespread praise. On Instagram, Groves said she hoped to "make them pervs quake in fear from the number of people supporting a statement that threatens their existence."

Groves didn't name the "perverts" who she was taking to task, but she clearly has a specific abuser "and their boot lickers" in mind. Last fall, the athlete made similar claims on social media, alleging a man had made her feel "uncomfortable" by staring at her in her swimsuit. She also divulged that a "well known coach" had made a "creepy comment" to her and then apologized within minutes, "possibly because the team psych told him to," she wrote. Groves has endometriosis and adenomyosis, and alleged she was told she didn't "deserve more help" after surgery. The swimmer said she was also body shamed.

The circumstances around Groves' decision to skip the Olympics are awful. It's depressing that female athletes endure such toxicity while trying to pull off superhuman feats of physical fitness. Groves is making a huge personal sacrifice to hopefully spark change in the misogynistic sports world, by giving up a once-every-four-years chance to compete at the Olympics in her prime. The last time the swimmer won a medal at a major event was in Tokyo in 2018, when she won gold at the Pan Pacific Championships in the 4x200m freestyle, and the Paris Games are three years away.

It brings to mind the other sacrifices athletes make in pursuit of social justice. The Olympics, for example, plans to punish athletes who protest at the Games — an outdated stance that hasn't changed since the 1960s. Then there's Colin Kaepernick, of course: the former quarterback for the San Francisco 49ers ignited a movement when he took a knee to protest police brutality and racism. He was vilified at the time and sacrificed his sports career in the process. But five years later, the tide of public opinion has shifted in his favor.

That makes me think Groves truly has a shot at moving the needle and getting the international sports community to do something about misogyny in athletics. During the 2016 Olympics, the media was excoriated for fixating on female competitors' appearances and disparaging them for things unrelated to their performance. An NBC commentator was slammed for saying Katie Ledecky "swims like a man." Right after winning gold at the Rio Games, gymnast Simone Biles made a declaration: "I’m not the next Usain Bolt or Michael Phelps. I’m the first Simone Biles." That's the key takeaway here: women Olympians want to be valued for their athletic prowess, not viewed as objects.