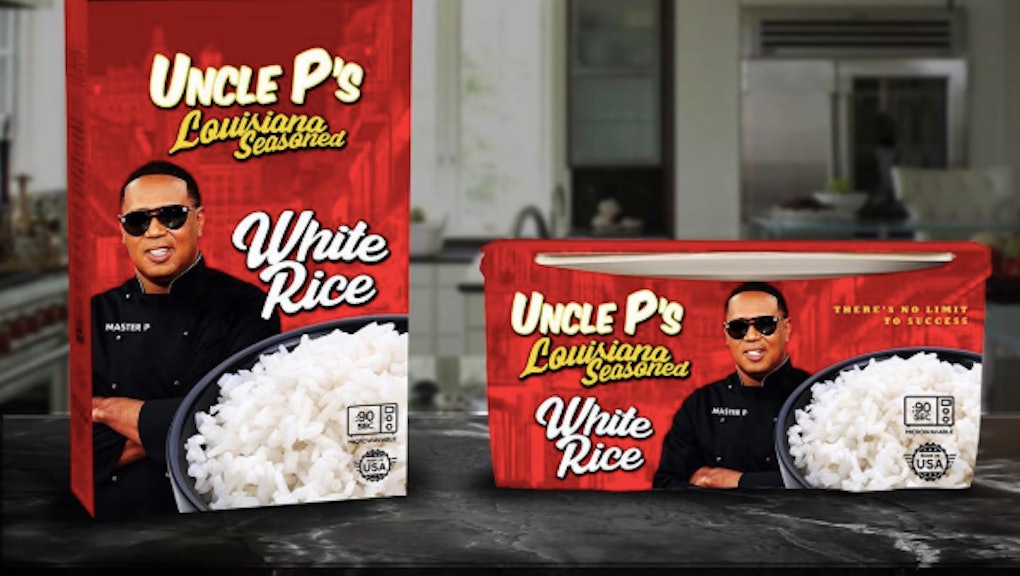 Rap icon, record producer, and philanthropist Master P has added another business venture to his list — and this time he’s aiming for your kitchen. The Louisiana-born rapper, more formally known as Percy Miller, launched a food brand that aims to fill the empty spot in grocery aisles left by the now-retired Aunt Jemima and Uncle Ben's, whose parent companies finally read the room and agreed to discontinue the labels in June.

The new line of food products, called Uncle P's, fall under a brand co-owned by James Lindsey, who you may know as Miller’s partner in perfectly seasoned chip brand Rap Snacks (and if their new stuff is as delicious as a bag of Romeo’s Bar-B-Quin With My Honey, they’ll have done it again). The line is poised to become America’s new go-to for pantry staples, offering rice, pancake batter, syrup, grits, and oatmeal.

Whether they reach that lofty goal or not, Miller’s intentions are pretty empowering; through the Black-owned brand, he wants to create job opportunities for young Black Americans, allocating a portion of the profits to develop real estate in Black neighborhoods — all while adding much needed diversity to the packaged food aisle. “We are opening the doors for other black-owned companies to produce their own products and brands to change the narrative,” Miller says, in an Instagram post.

"When you look at Aunt Jemima and Uncle Ben, a lot of those products are mockeries of African-American people and couldn't even feed our communities,” Miller said, in an interview with CNN. “With Uncle P, the more we make, the more we give. And the only way to give is by owning these products.”

"If they made billions of dollars off Aunt Jemima and Uncle Ben, imagine how much we'll make to give back to our own community,” P reflects. In 2019 alone, the Aunt Jemima brand made more than $744 million, and Uncle P's wants profits from their food brand to actually reach Black folk. The line's products are now available at grocery stores across the country.

Ever since Miller’s come up, he’s been giving back to his community. From funding youth centers and homeless shelters, to his efforts uplifting Hip Hop with No Limit Records and even covering funeral costs for a recent tragedy in Kentucky, Miller’s philanthropic efforts are a who he is. Thankfully, there’s room for a positive entry in the turbulent timeline of America’s food, from the racist overtones of an ice cream truck jingle to outdated mascots. Now, having a plate of pancakes — without a side of racial indigestion — is on the table.