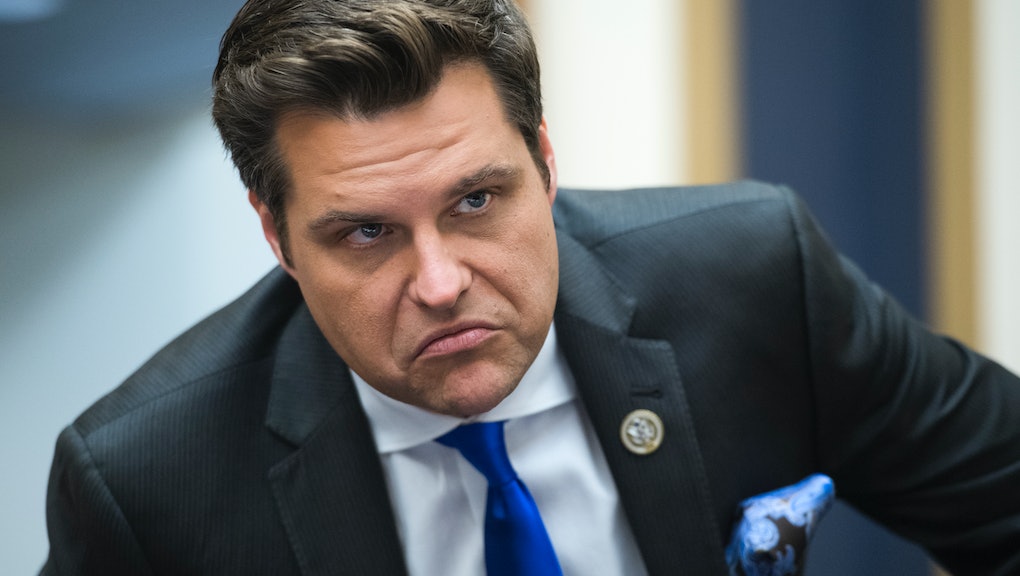 On Thursday afternoon, attorneys for former Florida tax collector Joel Greenberg announced that their client would likely take a plea deal with federal prosecutors on the 33 criminal counts levied against him, including sex trafficking of a minor. Ordinarily, the courtroom machinations of an obscure, small-time political figure — no matter how bonkers he may be — in state politics would be the stuff of local news reports, and nothing more. But in Greenberg's case, the charges to which he's apparently prepared to cop stem from a federal investigation that has branched out to include Florida congressman and rising star among MAGA cultists Matt Gaetz.

Gaetz has emphatically — and with conspicuously specific wording — denied the allegations that, like Greenberg, he both paid for sex, and had sex with a minor. But it's hard to imagine the congressman isn't sweating what a federal plea deal from his self-described "wingman" could imply.

As Greenberg's attorney Fritz Scheller put it to reporters after awkwardly trying his best to avoid answering any questions about Gaetz: "I am sure Matt Gaetz is not feeling very comfortable today."

In fact, as it so happens, the same day as Greenberg agreed to a plea deal, both CBS News and NBC News reported that federal prosecutors were looking into a recent flight Gaetz took to the Bahamas with Florida-based hand surgeon and American Medical Marijuana Physicians Association co-founder Jason Pirozzolo, who is believed to have fronted the bill for the plane, the hotel, and the alleged sex workers who accompanied the duo on their vacation — and who, if taken over state lines for the purpose of sex, bump the case up to the federal level. According to CBS News, investigators are particularly interested in whether Pirozzolo's generosity on the trip (not counting the actual cash he donated to the congressman's campaigns) was a quid pro quo for Gaetz's introducing the Medical Cannabis Research Act in both 2018 and 2019.

Oh, and if you're interested, here's a video of Pirozzolo hanging out with former President Donald Trump in 2019.

Of course, it's not all bad news for Gaetz, who has steadfastly denied the allegations and refused to step down no matter how many allegations are leveled against him. On Thursday, "The Women of U.S. Congressman Matt Gaetz’s Office" released an enthusiastic statement defending their boss against the various sordid claims which they "uniformly reject [...] as false."

Interestingly, not a single "Woman of U.S. Congressman Matt Gaetz's Office" seems to have signed their actual name to the open letter.