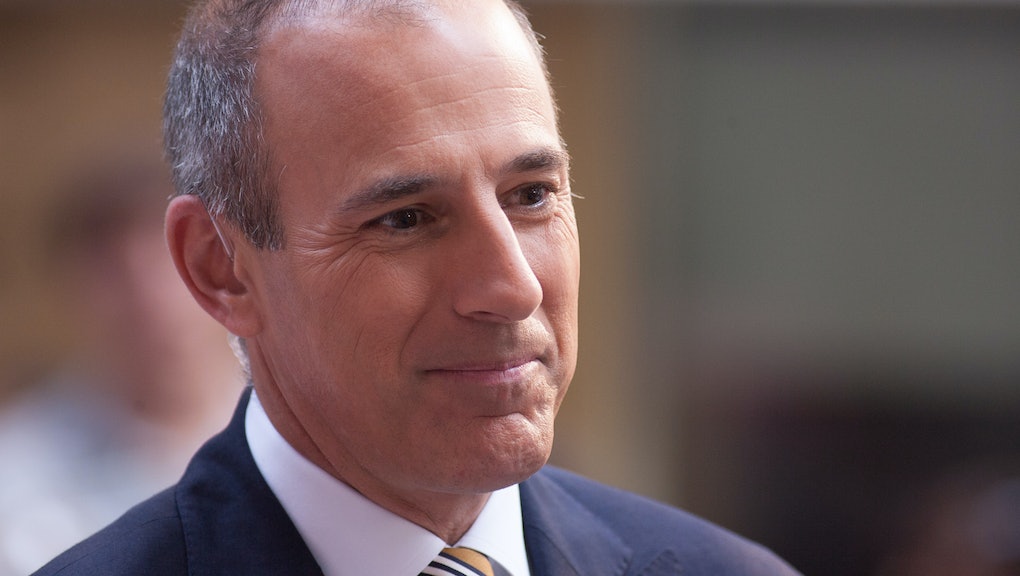 In Ronan Farrow’s new book, Catch and Kill, the New Yorker writer details a previously unreported rape allegation against former NBC host Matt Lauer. The news, which emerged via a report in Variety, comes shortly after Lauer made a cameo appearance on his 14-year-old daughter’s TikTok account — at one point doing one of the many dances trending on the social video platform. Lauer’s appearance on his daughter’s page is the closest he's come to a public appearance since initial reports of sexual misconduct emerged in 2017. Outlets like the Los Angeles Times, the Daily Mail, and Entertainment Tonight, all picked up on Lauer's TikToks.

It’s hard to tell if the disgraced NBC host thought his appearance would go unnoticed, or if he thought he could soften his public image as an accused sexual predator. In the context of the news emerging around him, Lauer appearing on TikTok is an unsettling choice. His daughter, who is 14 years old, was eventually subjected to an increased amount of exposure and even went so far as to post three videos about the accusations against her father. Most of the videos featuring Lauer that have circulated online seem to have been deleted from her account.

The constant mutation of social media platforms provides fuel for shamed public figures' attempts at redemption. News cycles move at a dizzying pace, and the pace at which whole modes of communication evolve is no less disorienting. One day you could be criticized for offensive tweets, only to find a welcoming audience on Twitch soon after. Think of Bill O’Reilly’s emergence as a podcaster following his ousting from Fox News. Exploring a new medium seems to be the way disgraced men slither back into the public eye.

Lauer's attempts at image rehabilitation have a particularly uncomfortable feeling to them. In the wake of the new allegations from Farrow's book becoming public, Lauer has gone, decidedly, on the defensive. Yesterday, he penned an open letter denying the allegations in forceful terms.

“In a new book, it is alleged that an extramarital, but consensual, sexual encounter I have previously admitted having, was in fact an assault,” Lauer wrote. “It is categorically false, ignores the facts, and defies common sense.”

The move seems not only like he has no remorse or shame about the allegations made against him, but that he doesn't care about how this will affect his alleged victims. It's what makes his not-so-subtle attempt at a re-emergence so callous. As recently as in 2018, there were rumors that Lauer would be brought back to NBC in order to help boost ratings. Lighthearted appearances on a social media platform, maybe a podcast appearance here or there, are all part of the road to redemption for men who misbehave. Leapfrogging from platform to platform until they are right back where they started.

And while a few brief cameos on his teenage daughter’s TikTok aren’t a multi-million dollar television contract, Lauer’s assumption that an audience still exists for him indicates that he doesn’t believe he should keep a low profile. It’s hard to imagine the man turning down an opportunity to be on a larger screen, reaching more than just his daughter’s 20,100 TikTok followers.

What many describe as "cancel" culture would be better described as taking leverage away from bad actors. The hope is that when audiences make their displeasure clear and constant, abusers get the message. Get off TikTok, Matt Lauer, no one wants to watch you anymore.

More like this
Hollywood producer Scott Rudin allegedly "relished in the cruelty" of abusing staffers
By Kara Weisenstein
Why grand jury proceedings are so secretive
By Vanessa Taylor
'Exterminate All the Brutes' is a messy, ambitious documentary that ties together genocide, white supremacy, colonialism ... and Josh Hartnett?
By Nicholas Russell
Stay up to date