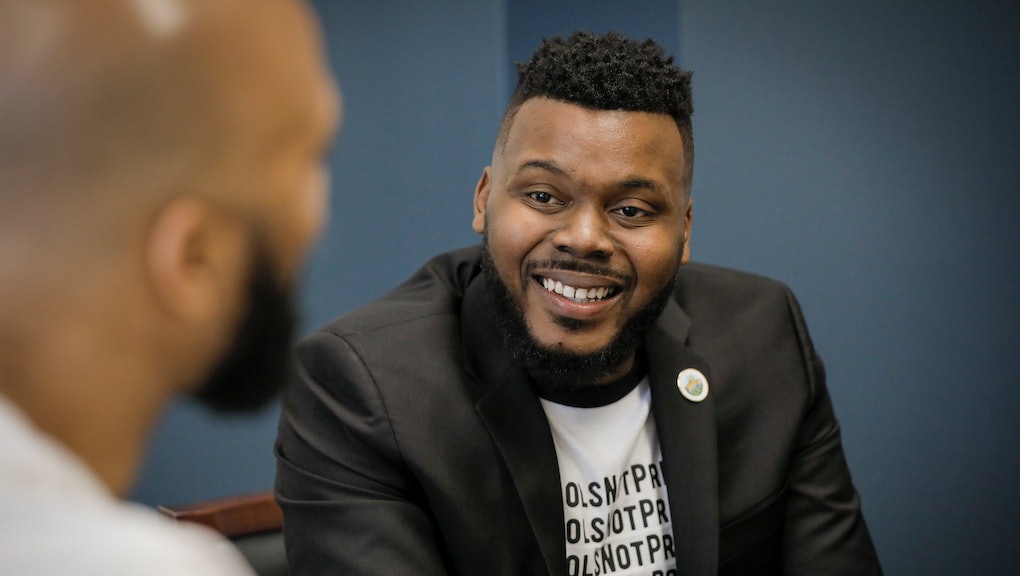 Meet Mayor Michael Tubbs, the 28-year-old with a radically inclusive vision for Stockton

It wasn’t long before Mayor Michael Tubbs took office that Stockton was generating headlines for all the wrong reasons. The city of 315,000 residents, located in California’s Central Valley, became the largest city in the U.S. to declare bankruptcy back in 2011. Although it’s situated less than 100 miles from the booming Silicon Valley, Stockton has been plagued in recent years by poverty, violence, educational inequality, and more.

But during a recent visit to the city with Grammy-award winning rapper and activist Common, I encountered a passionate group of local activists and organizers who, today, are beaming with pride and hopeful for the future of the city they’re working to revitalize.

Much of the turnaround can be attributed to the leadership of Tubbs, 28, who was elected as the city’s first black mayor in 2016. Tubbs was raised by a single mother in south Stockton and graduated from Stanford University. He first garnered national attention when he was endorsed by Oprah Winfrey while running for city council in 2012. Tubbs said in a recent TED talk that he was drawn to public service after his cousin was murdered in his community nine years ago.

That tragedy, coupled with Tubbs’ experience growing up with a father who was incarcerated, helped inform his approach to policy. “I used to blame [my father] for his choices,” Tubbs said during an interview with Mic at Stockton’s city hall. “But I realize now that the choices people make are often times in the context of the wider policy choices we make as a community in terms of laws on the books.”

Since becoming mayor, Tubbs has implemented an array of programs designed to combat the underlying structural issues which have torn his city apart. One of his first acts in office, for example, was to establish a violence prevention program called Advance Peace, offering people who are more at risk of committing violent crimes access to social services and mentorship. The program resulted in a steep reduction in violent crime last year.

Tubbs also recently enacted one of the first universal basic income experiments in the country. Under a pilot program called SEED, a small group of randomly selected residents living in neighborhoods where the median annual income is at or below $46,033 are receiving $500 every month for a total of 18 months. The individuals can spend the money however they choose, with no strings attached. The initiative is backed by a grant from the Economic Security Project, an organization led by Facebook co-founder Chris Hughes.

It’s too early to know if the measure will reduce wealth disparities. But the initiative has received widespread media attention and praise, as universal basic income gains popularity nationwide, and particularly in tech circles, to stem the tide of job loss due to automation. In fact, 2020 Democratic presidential candidate Andrew Yang is running on a platform to enact a universal basic income at the federal level.

Tubbs is clear to emphasize that the experiment, while important, represents just one pillar of his broader policy agenda. “Everything is intersectional,” he said. “Basic income is important, but it’s part of a larger strategy of [addressing] structural violence. From the way we do zoning and land use as a city, to the way we deploy police resources, to the way we do school funding as a state and nation, different institutions and structures create the environments that lead to the bad things we see.”

It’s this multi-faceted approach that has won Tubbs the support of community leaders and activists across his city. During Common’s recent visit with his nonprofit organization Imagine Justice, the rapper joined Tubbs for a lively conversation with a group of Stockton’s leading community organizations, including Fathers & Families of San Joaquin, Rise Stockton, Stockton Schools Initiative, Stockton Scholars, Gathering for Justice, With Our Words Inc, and the city’s Office of Violence Prevention.

As each of the leaders outlined their work on topics ranging from economic empowerment and criminal justice reform to sustainability, they took turns praising Tubbs for his inclusive vision. I later caught up with Common, who told me he was impressed by how Tubbs “sits and listens and connects with communities and people from different walks of life.”

Later that evening, Common performed a concert in downtown Stockton for several hundred residents, where he was awarded a key to the city by Tubbs.

Still, an enormity of challenges lie ahead. Earlier this year, the Department of Justice reached a settlement with Stockton’s school district after an investigation found systematic discrimination in the city’s public schools. The city has made strides in violence prevention and reducing mass incarceration, but violent crime remains a pervasive issue. And in the face of soaring inequality across the Bay Area, the city also had the fastest growing rent in the country in 2016.

Tubbs, who will be up for re-election in 2020, knows that he’s only begun to scratch the surface. Still, he exudes a quiet confidence, and believes his approach to governance is beginning to bear fruit in just a few short years.

When I asked him about the 2020 presidential election, Tubbs declined to endorse a candidate, although he did note that whomever the Democratic nominee is should be focused on a singular question: “What are we going to do to create an economic floor for every single American?”

“It’s easy to be anti-Trump,” Tubbs continued. “But Trump is a symptom of a deeper structural issue in this country — a manifestation of hundreds of years of that ideology permeating a lot of our policies. We need people who are engaged in creating a just community and world for the long haul.”

More like this
The Chauvin trial is incapable of delivering real justice
By Vanessa Taylor
New York has set aside a massive, first-of-its-kind fund for undocumented workers
By Rafi Schwartz
Georgia's voter suppression law is bad, Coca-Cola and Delta have finally decided
By Rafi Schwartz
Stay up to date