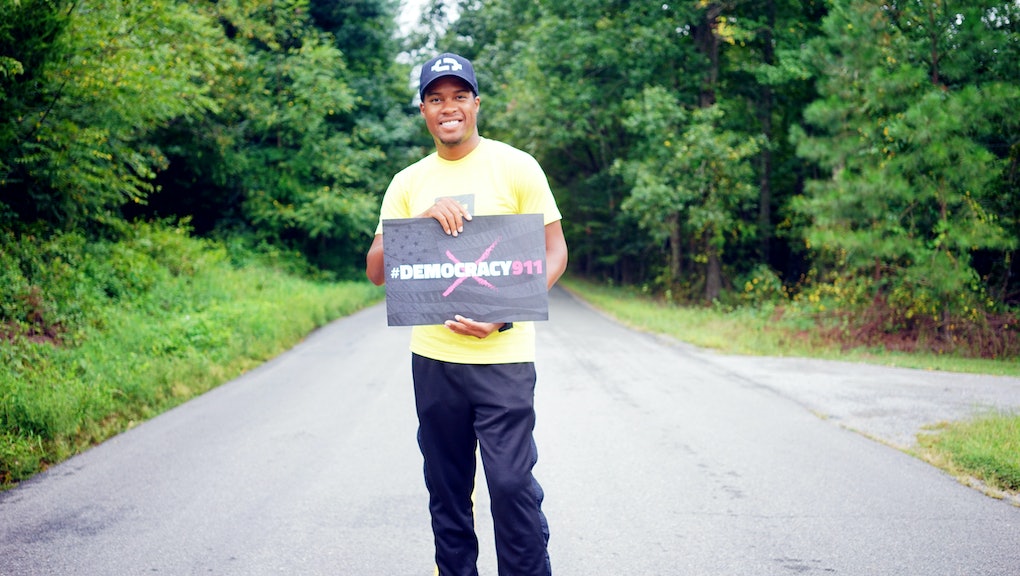 In total, Pearson trekked more than 600 miles from Atlanta to Washington, D.C. The goal: to combat corruption and voter suppression.

Pearson’s journey began on Aug. 6, and by the time he arrived in the U.S. capital on Sept. 21 he had logged over 1 million steps. The 31-year-old's hope is that by walking across the states, he highlighted the urgent need to fight for voter protections, safer elections, and an end to political corruption.

“We're witnessing a multi-sided assault, which is historic in nature, on our democracy,” Pearson explained in a Monday phone call with Mic. After arriving in D.C. over the weekend, Pearson was planning to sit on the Capitol steps Tuesday in honor of National Voter Registration Day.

Pearson serves as the director of external affairs at RepresentUs, a coalition of independents, progressives, and conservatives who are trying to build on America’s long tradition of pursuing federal reform through the states. The organization has received public endorsements from pop culture mainstays like Jennifer Lawrence, Michael Douglas, Sia, Spike Jonze, and Kerry Washington. Washington even tweeted out support for Pearson on the final days of his walk.

The way Pearson sees it, there are myriad threats to democracy that lawmakers urgently need to address. He decided to do the walk as a way to draw attention to one area in particular, which he believes is of bipartisan concern: corruption, gerrymandering, and the purge of voter rolls.

With his walk, he is challenging all of the 2020 presidential candidates to pledge to address comprehensive democratic reform in the first 100 days of their administration. He’s also calling for the Senate to pass a bipartisan alternative to the For the People Act, which was intended to reform voting laws and reduce gerrymandering. Pearson has proposed three reforms to the 2019 bill: The first is protecting the right to vote by ending voter purging, passing automatic voter registration, expanding early voting, allowing for same-day voter registration, and restoring the right to vote for people with past felony convictions. The second is making elections secure and competitive by ending gerrymandering and foreign meddling, and the third is combating corruption by ending secret donations, limiting lobbying in Washington, and pushing reforms that would make politicians dependent on voters rather than corporate interests.

“Whatever your issue is — whether you’re a conservative, independent, Republican, progressive, whatever — the solutions to your issues are caught in a death grip of corruption,” Pearson said.

Pearson specifically chose his route because of its significance to the Civil Rights Movement, wanting to draw attention to the parallels between the struggles during that period and now. The route from Atlanta to D.C. traced the steps of previous civil rights activists who fought for voting rights in previous generations, like Martin Luther King Jr. and Amelia Boynton Robinson.

During his walk, Pearson dealt with dehydration, a toenail that went completely black, and such high temperatures that his phone shut down. But none of the issues that he faced compared to what activists from previous generations dealt with, he said.

“There's no denying my identity as an African American, and the fact that I am a beneficiary as a result of the Civil Rights Movement — specifically the 1965 Voting Rights Act. And that's why I started this walk on Aug. 6,” Pearson explained. “That was the 54th anniversary of the Voting Rights Act. And it was the signature and landmark achievement of the Civil Rights Movement. [It] gave us a seat at the table … [it] gave us a voice.”

As impeachment proceedings heat up over President Trump’s communications with Ukraine, the sense that American democracy is under attack has spread beyond groups like RepresentUs. Prominent members of Congress, including civil rights mainstay Rep. John Lewis (D-Ga.) and House Intelligence Committee Chairman Adam Schiff (D-Calif.), have embraced the idea of impeachment. Longtime impeachment skeptic Nancy Pelosi, the House speaker, announced Tuesday that the lower chamber would launch an impeachment inquiry, after months of public demands for her to do so.

Even with politicians finally addressing the allegations of corruption at the most senior level of government, years of inaction on related issues have resulted in the public's increased distrust in the government's ability to solve the country's problems, the Pew Research Center discovered.

“There is a supermajority of voters across party lines ... who support sensible gun control,” Pearson says, using gun control as an example. But Washington politicians are “sitting on their hands … and when we look under the hood and see why they block that policy, we see that it's the gun lobby and the NRA that continue to give them millions in donations to buy their silence.”

Pearson’s goal was to challenge leaders to fight corruption within the system and to inspire American citizens to protect their right to vote. He encouraged everyone to check their registration and ensure their voter status is in order ahead of 2020; after all, several recent elections have been marred by accusations of voter suppression.

Pearson believes that the political system is broken and that the path to fixing it is complex and will take an active commitment from American leadership. And without fixing the system itself, Pearson believes, there’s no hope for fixing anything else.

Until then, he said: “You just got to put one foot in front of the other.”

More like this
More than 200 GOP lawmakers asked the Supreme Court to overturn Roe v. Wade
By Rafi Schwartz
Should public transit be free?
By Andy Crump
Arkansas's governor is very sorry he engineered a COVID surge in his state
By Rafi Schwartz
Stay up to date