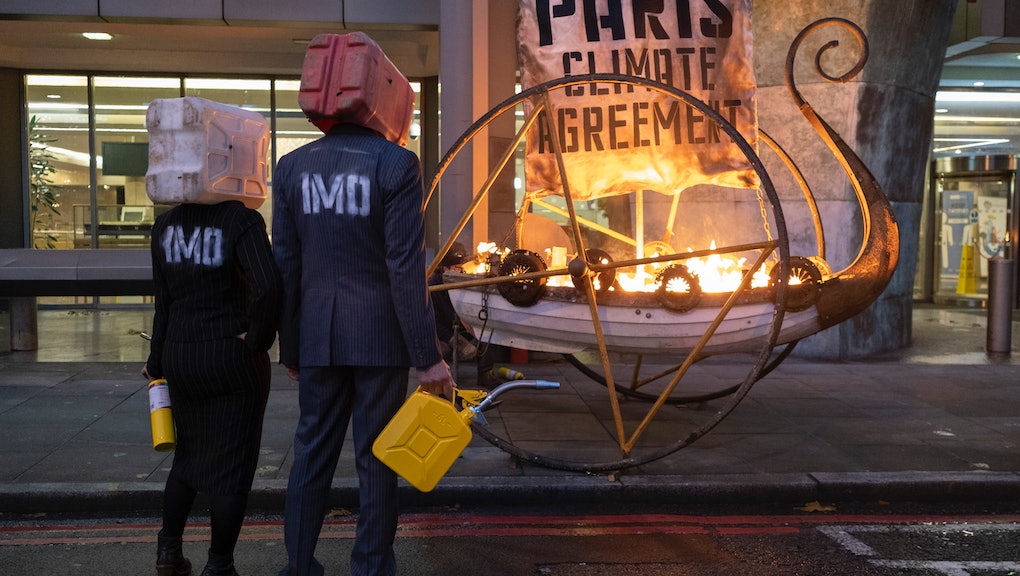 Meet the lawyers fighting to prosecute polluters as international criminals

The Earth is getting warmer and humans, particularly large corporations and industrial nations, are largely to blame. But there is currently no real mechanism to hold those parties accountable for the irreparable damage that they have done and continue to do to the planet. Now, legal experts are hoping to change that.

Earlier this month, the Stop Ecocide Foundation, along with parliamentarians from governing parties in Sweden, convened a panel of lawyers with the goal of drafting a legal definition for ecocide, the destruction of the planet's ecosystem. The effort is the first step in creating the legal framework needed for the International Criminal Court (ICC) to hold the world's biggest polluters, proprietors of deforestation, and destroyers of the planet's most delicate and important ecosystems accountable for their actions.

Currently, there is only one real mechanism for international courts to enforce major environmental offenses. Under the Rome Statute of the International Criminal Court's section on war crimes, it is illegal to "Intentionally launch an attack in the knowledge that such attack will cause incidental loss of life or injury to civilians or damage to civilian objects or widespread, long-term and severe damage to the natural environment which would be clearly excessive in relation to the concrete and direct overall military advantage anticipated."

That rule only works in a limited capacity and does not provide a sufficient mechanism to hold accountable countries and corporations that actively pollute the planet and contribute massive amounts of greenhouse gas emissions that are causing the planet to heat up. These actions are not the result of acts of war, but rather acts of rapid development that often fail to account for environmental impact.

There have been efforts to create a definition for ecocide in the past, dating back to an attempt to codify the term into international law in the 1970s after the United States devastated local populations and wildlife in Vietnam by using the deadly and dangerous Agent Orange chemical weapon. These attempts, however, have failed to gain the traction necessary to turn ecocide into a criminal offense. But with climate change an increasingly pressing concern, and one that global stakeholders are finally getting around to addressing while the window to stave off the worst effects of climate change continues to close, there might finally be the momentum needed.

Mackintosh is the co-chair of the Stop Ecocide Foundation's panel that has been tasked with defining ecocide. While she's leading the effort to get ecocide on the books, she recognizes that showing direct evidence of the harm caused by polluters and violators of environmental regulations is difficult. "Some of the challenges in establishing such a law lie in the relationship between the destructive acts and the human harms, as well as the time it can take for that harm to manifest," she says.

As an example, she pointed to deforestation. We know that deforestation can have devastating effects on an ecosystem, displacing the inhabitants of the forest and contributing to climate change by destroying one of our most reliable sources of carbon storage. Destroying trees that store carbon can cause the planet to warm faster, leading to rising sea levels and more extreme weather events.

"All of these phenomena harm people and are ultimately leading to a drastic situation for humanity as a whole, but the chain of causation is more complex than in a campaign of ethnic cleansing, for example," Mackintosh explains. "We need to use our imaginations to deal with these massively destructive acts within the frame of international criminal law."

Darryl Robinson, a law professor at Queen's University and former advisor to the chief prosecutor at the International Criminal Court, tells Mic that the reason for defining ecocide now is simple: "It has to be now because it wasn’t done earlier." He notes that rising sea levels, the extinction of species, and increased levels of pollution have made environmental conditions so dangerous that political leaders can no longer ignore them. "A crime of ecocide is one part of the response, to shift perceptions about the massive harm and the international wrongfulness of such acts," he explains.

Mass environmental destruction is a greater harm than most things that are criminalized. - Darryl Robinson

Robinson acknowledges that many countries have their own environmental laws and regulations and that these laws can serve to protect the environment domestically at times, but notes "these laws are patchy, irregular, under-enforced and often corrupted." Creating a definition for ecocide would give international courts the jurisdiction to punish the planet's biggest polluters.

"As reckless practices grow in scale, we see that our planet is small and interconnected," he says. "Mass environmental destruction is a greater harm than most things that are criminalized."

Creating a legal definition for ecocide would also push environmental crimes like pollution or deliberate deforestation beyond simply being a regulatory issue. Environmental protections often try to restrict these actions, but don't necessarily view them in a broader scope of how they affect the planet beyond the immediate space in which the violation takes place. Defining ecocide would help to recognize those acts as a "breach of one’s duty to humanity," per Robinson.

Turning ecocide into international law would not guarantee that these violations of the planet's ecosystems would stop. Robinson notes that while giving tools to the International Criminal Court allows for the possibility of enforcement, the court "is overloaded with the crimes already under its jurisdiction."

But having the law presents the possibility of holding polluters to account in a way that has not previously been possible. Mackintosh notes that the world's biggest polluters, industries, and countries that have actively participated in mass deforestation, even "the acts of the carbon majors in continuing to push for more fossil fuel use while they knew of its destructive effects" could be punishable under the charge of ecocide.

"If a crime of ecocide capturing these acts were included in the Rome Statute of the International Criminal Court, Board members and senior executives of responsible corporations, as well as government officials who sponsored or enabled the acts, might be held criminally responsible," she explains.

The first meeting of the Stop Ecocide Foundation's panel will commence in January. It will mark the first step in creating a definition for ecocide, and there is already plenty of support for the effort. The small island nations of Vanuatu and the Maldives have asked the ICC to explore creating a crime of ecocide, and France and Belgium have similarly pledged support for such a plan. Time will tell if ecocide becomes an enforceable part of international law. In the meantime, crimes against the planet, and in turn its inhabitants, continue.