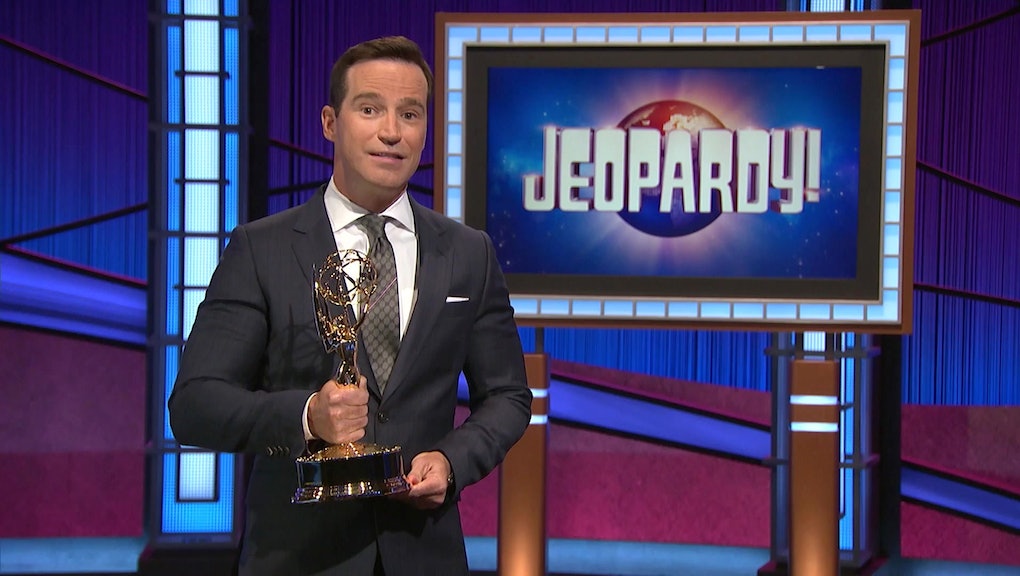 Mike Richards has resigned from the 'Jeopardy!' job he gave himself

Well that was fast. Jeopardy! executive producer Mike Richards is out as Alex Trebek's successor, just nine days after Sony Pictures TV named him the permanent host of the beloved game show. Frankly, we're thrilled! Despite the avalanche of evidence that emerged in recent days indicating Richards isn't a very nice person, it seemed like Jeopardy! was going to stand by him, banking on the fact that the news cycle would move on and the show's core (older, white) audience wouldn't care about his checkered past. That didn't happen, however! And now the search is on for a replacement-replacement host.

Trebek helmed Jeopardy! for 37 years, and after he died of pancreatic cancer last November, the show brought in a whole bunch of buzzy guest hosts to take turns behind the podium in his absence, from Anderson Cooper and Robin Roberts to Katie Couric and Dr. Mehmet Oz. Some of them, like LeVar Burton, Ken Jennings and Aaron Rodgers, were openly auditioning for the permanent gig. As Jeopardy! EP, Richards only overlapped with Trebek for a few months, and he wasn't initially part of the guest hosting lineup. He was actually the first person tapped to find the late host's replacement... and then he seemingly threw his own hat in the ring. (Sony claimed Richards stepped aside once he became a candidate.)

Sony reportedly viewed Richards as a neutral personality who wouldn't overshadow the iconic show, and he was competent during his stint as guest host last winter, but he was also an annoyingly bland choice. It seemed like the Jeopardy! suits were banking on inoffensive whiteness to placate the daytime TV audience. What Sony didn't anticipate was the furious blowback from Jeopardy! fans, who pointed to Richards' EP role as probable evidence he had a hand in installing himself as host.

The New York Times delved into how Jeopardy!'s selection process became "a little like choosing a pope," as Jennings phrased it. "If you don’t watch Jeopardy!, you don’t understand, but people take this very seriously," the record-breaking champion explained. Sony pointed to low ratings for fan favorites like Burton and high ones for Richards as means of justifying his selection. But on Saturday, the Times revealed that Richards alone chose which episodes were screened for focus groups, while other supervising producers were excluded from the process. The EP wasn't who Trebek most likely wanted as his successor; that was probably Jennings, who found a pair of the late host's cufflinks and a handwritten note from his widow, Jean, in his dressing room when he arrived on set for his audition. Or CNN's Laura Coates, who Trebek named as a potential successor before his death, but who never even had an audition on the show.

The revelation that Richards likely swayed the host selection process in his favor left a bitter taste in fans' mouths. But then, on the eve of his first official day on the job, The Ringer published a report exposing all the racist, sexist vitriol he'd spouted on an old podcast. When Richards realized reporters were nosing around, he scrubbed all 41 episodes of The Randumb Show from the internet. But the journalists documented him expressing a whole swath of disgusting views circa 2013-2014.

Richards disparaged women's bodies and insulted and harassed his co-host and former assistant, Beth Triffon, asking to see pictures of her "boobies." He used slurs like the R-word, made a crack about Jewish people having big noses, and made fun of his co-host's height by calling her a derogatory term for little people. Richards went on a sexist rant about a picture of Triffon's friends wearing one-piece swimsuits, calling them "genuinely unattractive." When she complained about apartment problems, Richards responded: "Does Beth live, like, in Haiti? Doesn’t it sound like that?" He also admonished her for giving a dollar to an unhoused woman. "I thought that she needed it... so she could get some coffee or some food," Triffon protested, and Richards responded, "Or some crack! Or some meth!"

When the Jeopardy! EP apologized this week for his bad behavior eight years ago, he made it sound like ancient history or just locker room talk between friends. But the podcast episodes were mostly taped in his office at The Price Is Right, in the presence of two much-younger female employees — Triffon and his then-assistant, Jen Bisgrove, who served as the podcast producer. It's striking that Richards was this cavalier with his language and behavior towards women in a public forum, when just a few years prior, he'd been sued by Price models for pregnancy discrimination. (Also notable: when he became EP of Price, he traded out aging models for younger ones, made their skirts shorter and mandated they wear bikinis more often.)

Richards released a statement about his "decision" to step aside: "It has become clear that moving forward as host would be too much of a distraction for our fans and not the right move for the show," he said. In the meantime, Jeopardy! is bringing back more guest hosts. (If Burton doesn't get another whack at the job, with 10 whole episodes, ideally not while competing with viewership of the Olympics, his supporters will riot.) Richards will remain the game show's EP, however, which is pretty awkward and leaves lingering questions about his influence over who gets the gig.

This "smile with sharp teeth" (as one former employee described Richards) believed he was untouchable. He'd been gunning for a game show hosting job his whole career. (Drew Carey beat him out to become Bob Barker's Price successor in 2007.) When the chance to nab Trebek's gig presented itself, he probably thought he was entitled to it. But people who cherish Jeopardy! as an institution instead held Richards accountable for his past, refusing to let him tarnish Trebek's sterling legacy. What is "you get what's coming to you?"