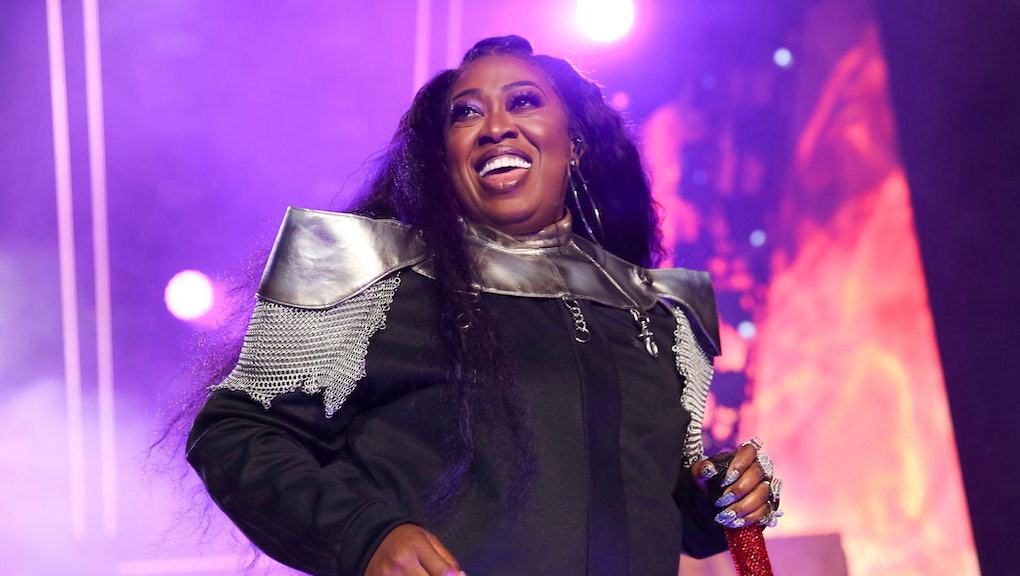 Missy Elliott's 'Throw It Back' marks a momentous comeback

In the music video for Missy Elliott’s “Throw It Back,” Teyana Taylor introduces the veteran rapper to a child who has never heard of her as both, “the innovator of all innovators,” and “the game-changing sensation.” Missy dropped the video, as well as Iconography, her first EP in 14 years, at midnight on Friday, and both show why Teyana’s words are no exaggeration.

"At midnight tonight I’m dropping a collection of new songs,” Elliott wrote on Twitter on Thursday. “Let’s #ThrowItBack to a time when music just felt good and made us want to dance!"

In the video, the child who doesn’t know about Missy is sent to a kind of Missy Elliott universe to be educated. In this new hyper pink dimension, we see Elliott, standing on a pink carpet, dressed in a pink suit with a pink hair. Her hair is pink, her lips are pink, her background dancers are in pink. Then, all of the sudden, with a flick of her wrist, the wigs on Elliott’s dancers go flying. The video could have ended there, and still would have been one of the most fun and original music videos of the year.

But this is Elliott, who will be receiving the VMA’s Video Vanguard award later this month, so the video keeps getting cooler, of course. Her braids are used as a jump rope for her dancers, all clad in matching tie-dye sets.

The all-pink outfits are swapped for blues and neon green. Elliott is carried in like a queen as she sits in the husk of a partially destroyed car, and raises her glass to the camera. The choreography stays crisp. As Elliott raps “Missy make up her own rules / not many could do what I do / So many VMAs / That I could live on the moon,” she appears in the iconic Moonman space suit – wearing the exact silhouette of the award she’ll be receiving in just a few weeks as she is honored for her life’s work.

The new album is exciting – Missy has released a few singles and has been featured on songs since her 2005 album The Cookbook, but we haven’t heard a complete project from her until now. While the EP is only five songs, Elliott delivered music that feels good and makes you want to dance – she successfully threw it back.

More like this
Phoebe Bridgers and John Mulaney announced tour dates and the internet imploded
By Chloe Stillwell
Hip-hop wouldn't be the same without Biz Markie
By Naima Cochrane
Normani's "Wild Side" video is a stunning glimpse into her future as the queen of R&B
By Keith Nelson Jr.
Stay up to date