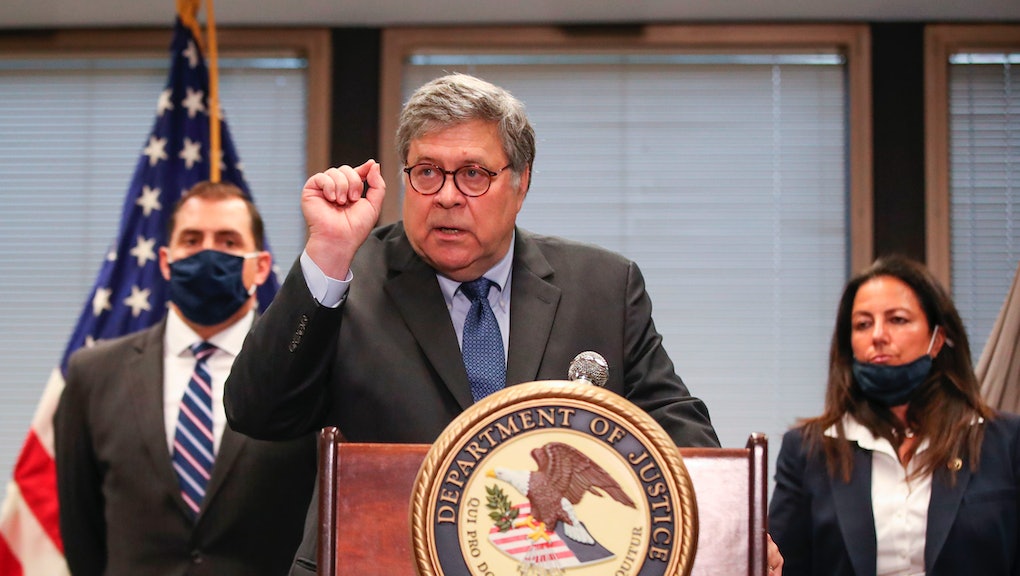 New York City, Portland, and Seattle are officially "anarchist jurisdictions," according to the DOJ

Three weeks after the Trump administration announced that it would review recipients of federal funding "that are permitting anarchy, violence, and destruction in American cities," the Department of Justice (DOJ) has named the first three municipalities — labeled "anarchist jurisdictions" — to see their funding slashed: New York City, Portland, Oregon, and Seattle. All three cities have a couple things in common: They are largely Democratic, and they have been protest hotspots this year.

The DOJ plans to punish the cities by withholding federal dollars because of the local leaders' alleged inability to curtail what the federal government refers to as "anarchy." Apparently, the DOJ believes that anarchy is akin to opposition to police, either informally or by formal legislative means, such as defunding police departments.

That definition contrasts the one used by Teen Vogue labor journalist Kim Kelly, who defined anarchy as "a radical, revolutionary leftist political philosophy that advocates for the abolition of government, hierarchy, and all other unequal systems of power."

But as Joanne Freeman put it on Twitter, the DOJ's factual inaccuracy isn't the point. "Outlawing & punishing opposition to the administration and civil protest: that’s the point," she wrote.

In a statement, Attorney General William Barr said, "When state and local leaders impede their own law enforcement officers and agencies from doing their jobs, it endangers innocent citizens who deserve to be protected, including those who are trying to peacefully assemble and protest." The statement goes on to say that Barr hopes withholding federal dollars will motivate cities to reinstate power to police departments and "become serious about performing the basic function of government and start protecting their own citizens." Subjectively, the release also states that the federal government can withhold funding based on "any other related factors the Attorney General deems appropriate."

The news comes after a summer of President Trump pushing for "law and order," a rhetorical dog whistle that vilifies protestors and obscures the message of the past few months: Black lives matter. In Portland, the offenses that the city is being punished for include the city council deciding to cut the police budget (which was in line with what Portlanders demanded and what members of the city council were permitted to do) and rejecting the Trump administration's "offer" for federal agents. The formal offer did not stop federal agents from descending on the Pacific Northwest city and reportedly kidnapping individuals off of the street.

As for its justification in denying funding to Seattle, the DOJ release cited two reasons: that the city permitted the construction of the Capitol Hill Occupied Protest (CHOP) (first known as the Capitol Hill Autonomous Zone) and that city leaders refused assistance from federal agents and officers. The DOJ release does not say whether or not any federal laws or statutes were broken in either instance.

New York City is similarly being targeted for its refusal of federal law enforcement, as well as its police budget cuts and decisions to not prosecute "protest-related charges," among other cited reasons.

The DOJ announcement was immediately met with pushback from leaders of the cities and states in question, and will certainly face legal challenges. In fact, New York Attorney General Letitia James confirmed she's already preparing a lawsuit. The president "is trying to distract the American people from his failures as a leader and is using the last few months of his presidency to sow more chaos, more hatred, and more fear," she said in a statement. "The president should be prepared to defend this illegal order in court, which hypocritically lays the groundwork to defund New York and the very types of law enforcement President Trump pretends to care about."

Meanwhile, the mayors of all three jurisdictions — Bill de Blasio of New York City, Ted Wheeler of Portland, and Jenny Durkan of Seattle — issued a joint statement, saying, "This is thoroughly political and unconstitutional. The President is playing cheap political games with Congressionally directed funds."