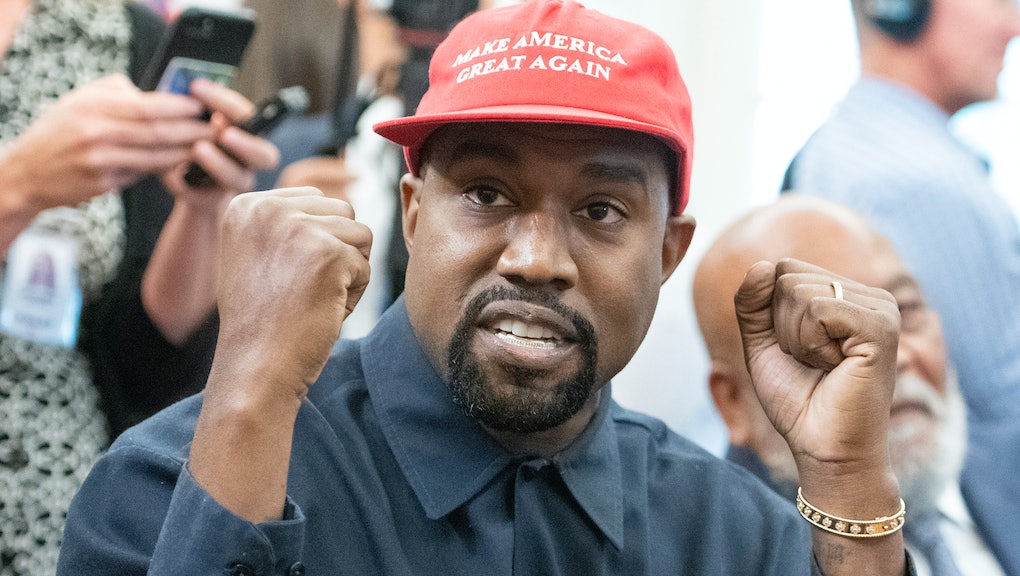 Last week, the internet was buzzing with reports that Kanye West’s presidential bid was getting a boost from Republicans — and Trump allies. This week, it sounds like the scrambling to get the megalomaniacal rapper on the ballot in a number of states may have been a fruitless endeavor. New Jersey and Illinois have both nixed West’s name from the running, and it looks like Wisconsin could be next, since lots of the signatures the star’s campaign submitted to get him on the ballot appear to be fake. Now, some political experts are saying Kanye may have committed election fraud.

The board of elections in Illinois reviewed the validity of the signatures on West’s petition after three different whistleblowers asked the state to take a closer look in late July. On Friday, August 7, the state elections board announced that 60% of them were invalid — that’s 1,928 of the 3,218 signatures West submitted. He needed 2,500 valid names to enter the race. Ed Mullen, one of the lawyers challenging West’s nominating petitions, told the Chicago Tribune that the announcement means the star “is virtually certain to be kicked off the ballot.”

This isn’t the first time signatures on West’s petitions were deemed suspicious. In New Jersey, where he needed 800 names to get on the ballot, an elections attorney reported hundreds of phony signatures. Of the 1,327 West submitted, Scott Salmon identified at least 640 names of people who were not registered to vote, did not live at their listed address, or provided incomplete information. He also found multiple signatures with apparently identical handwriting. West’s campaign bowed out of the race in New Jersey last week hours before a hearing scheduled to rule on the validity of his petition.

The same day the Illinois board of elections announced its findings, Democrats in Wisconsin filed their own complaint against West, citing lateness in submitting his petition and pointing to fake signatures with names like “Mickey Mouse” and “Bernie Sanders.” According to the Milwaukee Journal Sentinel, the complaint also contains affidavits from citizens who say they were conned into signing West’s petition to get on the ballot.

Cheryl Pernell said she was approached in a Walmart parking lot in Milwaukee by a woman who asked if she was registered to vote. When Pernell said yes, the woman asked her to put down her name so they’d know she was already registered. Pernell gave out her information as requested, but said she couldn’t see the top of the form she signed.

“Then yesterday, August 6, I got a call telling me what I actually signed was papers to get Kanye West on the ballot,” Pernell wrote in her affidavit. “If I had known that, I wouldn’t have signed the papers, absolutely not. Kanye West would not get my vote and I think it’s a joke that he’s running for president.”

All these allegations of suspect tactics employed to get West on the ballot could constitute election fraud, according to political experts. "If the affidavits are true … crimes were committed by the West campaign," attorney Michael Maistelman, who gathered the affidavits for the Wisconsin Democratic Party, told the Milwaukee Journal Sentinel.

Political analyst April Ryan echoed his assertion. "Two states declaring #KanyeWest ineligible to be on #POTUS ballot due to faulty signatures could open him up to an #ElectionFraud investigation," she tweeted on Saturday.

A month ago, West was polling at a meager 2% and potentially pulled a percentage point from Trump when the rapper’s name was added to the mix, according to a Redfield & Wilton Strategies poll. That throws some ice water on the theory that West’s candidacy would siphon voters away from presumptive Democratic nominee Joe Biden. The suspicious petitions make it look even less likely that the star will end up on most ballots come November. (Knock on wood.) That said, it’s time to call Kanye’s campaign what it really is: a dark, twisted distraction.