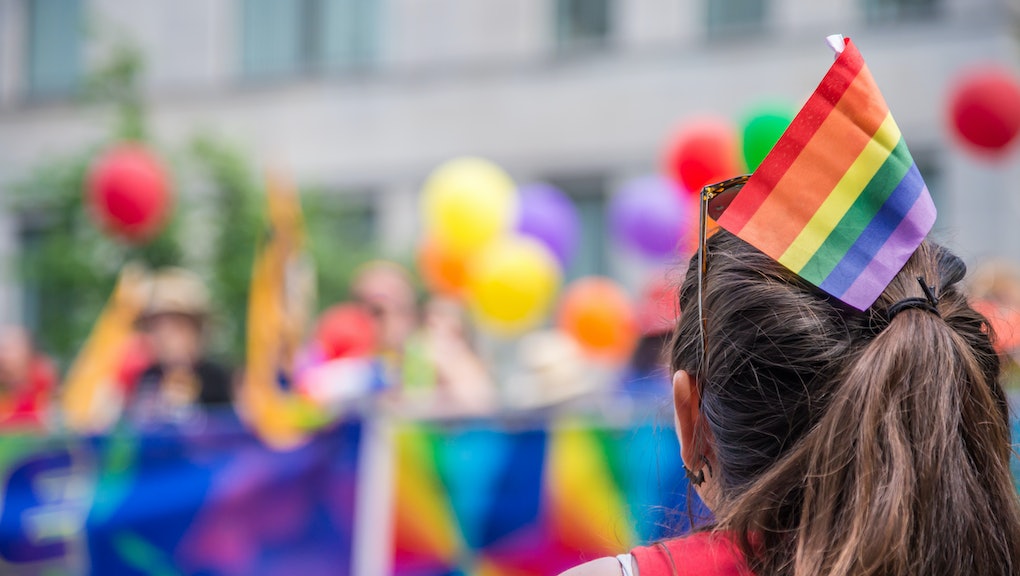 June, a.k.a. Pride Month, is my favorite time of the year. Rainbow flags are everywhere, gayness is at the forefront of people’s minds, and unlike during the rest of the year, I don’t have to constantly “come out" or find ways to work my queerness into conversation. Yet as each June comes to an end, I find a real post-Pride depression setting in; it feels like one minute, we're all dancing in the streets, but the next, it's time to get back in the closet.

Pride, with its public, joyous celebration of gayness, can be such an important time. We get to march in parades, show off PDA, and spread awareness of LGBTQ+ issues. During New Orleans Pride, I kissed a beautiful woman in the middle of a parade while people cheered. Someone actually slapped me on the back in congratulations (sidenote: I appreciated the affirmation, but I low-key hated that person for interrupting.) I reveled in both the personal triumph and the public acknowledgment of our kiss, because who gets high fives for PDA? Usually not queers. It felt like, for once, I was standing fully in my identity.

But every year, once Pride ends and July sets in, the public rainbow flags stop waving and it feels like people forget to continue the celebration of queer love. As my friend Julia says, July is the time to "roll up the rainbow carpet and wash up your glitter. Piss out the fire and call up the dogs, y’all.” Indeed, going back to normal, heteronormative life after Pride feels like someone has pissed out our celebratory fire.

“Reintegration is a challenge," says Dulcinea Pitagora, an NYC-based psychotherapist who works with a lot of sexual minorities, “especially when it has to do with an identity that you have to hide at other times."

For people who have to spend the rest of the year wondering whether it's safe to hold hands with the girl they dig, the months after Pride can be especially depressing. "There is still hyper-vigilance that goes along with being a sexual minority," notes Pitagora. "Even if it’s subconscious, after the celebration you go back to that hyper-vigilance. You go back to reality.”

In my reality, I’m a queer single woman in the deep South. Like Pitagora says, I have to be hyper-vigilant and think constantly about whether it’s safe for me to share my identity. I have to think before I flirt, talk about my love life, or just be who I am. Still, because I have a lot of privilege (whiteness, education, relative socioeconomic security, and a pretty femme appearance), I have it easier than many others, and it is due in no small part to those privileges (and my own inability to STFU), that I am able to be out there owning my queerness like a badge of honor on the daily. I would not, say, however, that it's easy.

“There can be a lot of internal conflict about going back to reality,” Pitagora says. “Part of your core identity that doesn’t usually get attention gets attention and then it has to recede. When you leave the environment that allowed you to be the majority for a moment, there’s dissonance.”

Coming back to this way of life is a form of emotional fallout. It feels like although the me that was celebrated two weeks ago is still here and hasn’t changed, the mainstream has changed its mind about how welcome I am. The sense of being among many other people on this big queer adventure together disappears, and it becomes clear that I have to go back to the regularly scheduled status quo. It’s a little lonely.

Don’t get me wrong, I still have my queer family and they celebrate me and mourn with me and slap me on the back all the time. And even though there’s a lot less glitter in our kisses, I’m still talking to that girl.

But it's not the same as during Pride, when everyone happily picks up on my queerness through the rainbow pin on my fanny pack (as if the fanny pack itself isn't a queer giveaway) and how often I say "she" when talking about my love life. Pride may be an awesome affirmation of LGBTQ+ identity and culture, but it's also a reminder of what so many of us are missing out on in everyday life.