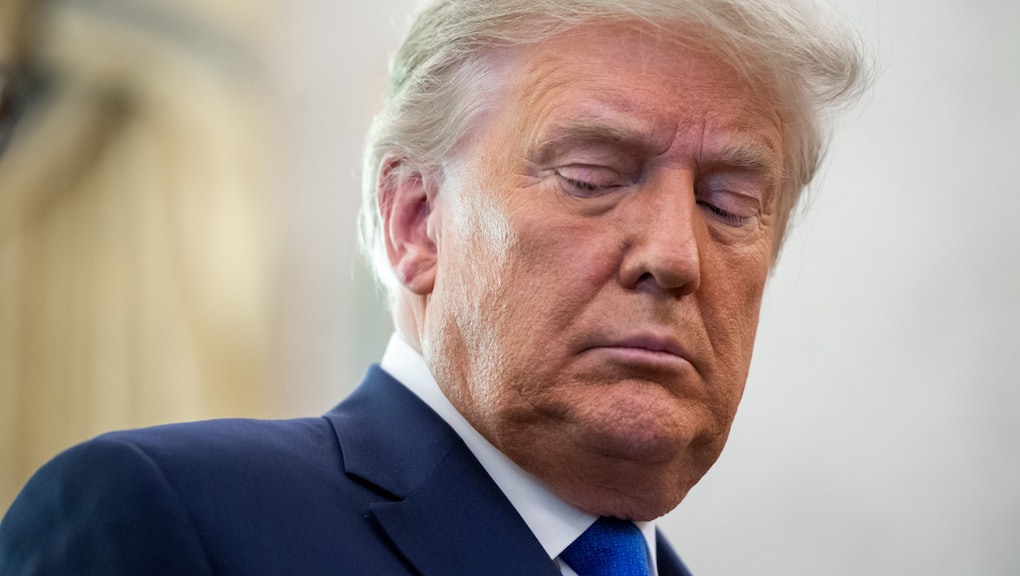 Prosecuting Trump: Here's how it could happen

It's well understood, though at times not acknowledged, that access to power in America means you can get away with things those without said access cannot. There's no clearer contemporary example of this than former President Donald Trump, who, throughout his four years in office, enabled — if not outright committed himself — a number of offenses that experts say would land anyone else in jail.

Consider the following brief list of things Trump did as president: he violated international law by putting kids in cages, hosted a global leader summit that benefited his private business, and incited his supporters to commit violence. And, just 13 months ago, the House voted to impeach Trump for high crimes and misdemeanors, related to the former president allegedly leveraging U.S. security aid to get an ally to provide politically helpful information on a rival. In the end, that impeachment trial led to an acquittal, and Trump faced no material repercussions. Then, just one week before the inauguration of President Biden, Trump became the first president in history to be impeached twice, this time for his role in inciting a violent riot at the U.S. Capitol.

In the end, Trump left office on the morning of Jan. 20, having spent years doing a series of thing regular civilians may have faced jail time for. Now, his exit has dredged up a number of questions around his day in court — mainly, whether there will be one at all. It's not clear yet whether Trump will ever have to answer for his actions, but here are a few ways Trump could be prosecuted now that he's left office.

One of the most obvious routes to prosecution is to fulfill an investigation that's already in progress. Manhattan District Attorney Cyrus Vance Jr. is currently leading just one of two investigations into the Trump Organization, though the DA has not elaborated on what specific charges he is pursuing. Much of what the public knows about potential charges comes from the bombshell testimony by Trump's former lawyer Michael Cohen, who confessed to committing multiple crimes under Trump's direction.

New York Attorney General Letitia James, meanwhile, is investigating a separate civil case against Trump for potentially misleading officials on property values to lessen his company's tax burden. James launched the investigation in 2019 after Cohen testified in front of Congress. Specifically, the investigation is looking into a Trump golf course, a Trump building on Wall Street in Manhattan, and the Trump International Hotel and Tower Chicago.

Emoluments clause of the Constitution

The Constitution's emoluments clause prevents U.S. public and state officials from accepting gifts from foreign officials or governments. After a lengthy congressional investigation into whether or not the president engaged in illegal quid-pro-quo behavior with Ukrainian President Volodymyr Zelensky, attorneys general in Maryland and Washington, D.C., launched investigations into Trump's actions.

But it's difficult to prove a violation of the emoluments clause; even an obvious ethical violation is not necessarily enough to bring charges against someone. One of the main things that stands in the way is that Trump's full personal and business tax returns have not yet been made completely available. Those returns would be needed in order for the AGs to prove that Trump received foreign payments in return for federal kickbacks.

One wildcard in all of this is Trump's impending impeachment trial, which is slated to begin Feb. 9. The House impeached Trump on the grounds of inciting a riot against the United States — the Jan. 6 coup attempt at the Capitol — and now the Senate will hold a trial to decide whether or not to convict Trump for inciting said riot. While there's still some disagreement from legal scholars on whether it's even constitutional for the Senate to convict a former president, it's unlikely that gray area will stop a trial from proceeding.

Moreover, conviction in an impeachment doesn't mean Trump is going to be incarcerated, will have to pay a fine, or face material repercussions of any kind. It's simply an acknowledgment from two-thirds of the Senate that Trump is guilty of the crime he was impeached for, enough to be removed from office. But because Trump is already a former president, the real punishment for him would come after the Senate impeachment trial draws to a close, and only if the Senate convicts him: That's when the Senate could vote on a resolution to ban Trump from ever holding federal office again.

Meanwhile, earlier this month, Reuters laid out the criminal charges Trump could conceivably face for the speech he gave before his supporters descended on the Capitol. As they explain, there are several federal laws against inciting rebellion against the government or encouraging sedition, as well as a local law in D.C. that threatens 180 days in jail or a fine for anyone who "willfully incites or urges other persons to engage in a riot." But, per the legal experts Reuters spoke with, Trump would likely be able to mount a strong defense against these charges via the First Amendment's free speech protections.

Why charges still may not be brought after all

The biggest variable, in the end, is Trump's presidency. His previous title afforded him great power, connections, and just enough slipperiness to slide through the legal system unscathed. And because our legal system makes it so hard to hold presidents accountable, there isn't a whole lot of precedent to lean on that can offer guidance on with which crimes and behaviors prosecutors could charge Trump.

In the end, it's highly unlikely that Trump will be charged or convicted of any federal crimes or violations. Prosecuting Trump for committing a federal crime would also require the cooperation of multiple agencies and individuals the president deputized to defend him over the past four years. For instance, the Department of Justice is intended to work on behalf of the American people to investigate and adjudicate cases of national importance, but during Trump's presidency, Attorney General Bill Barr and the DOJ effectively operated as Trump's personal legal arm. Because of this, state-level charges would likely be easier to bring — hence New York's several investigations — and state officials might be less easily swayed by the pressures of a federal official.

Multiple experts, though, have claimed that prosecuting Trump in any capacity would weaken Biden's political agenda by directing attention back to Trump, rather than using the Oval Office to shine a light on the many crises the country is currently dealing with. Biden already allowed for Trump's Senate impeachment trial to be delayed until next month so Congress could prioritize his agenda first, so it's hard to imagine he's eager for his Justice Department to spend time investigating his predecessor's indiscretions.

More like this
After 9/11, the U.S. leaned into security theater. Here's how that's playing out 20 years later
By Vanessa Taylor
Live from New York: Revisiting the totally bonkers era of post-9/11 'SNL'
By Rafi Schwartz
How the shock and confusion of 9/11 enabled our modern conspiracy era
By AJ Dellinger
Stay up to date