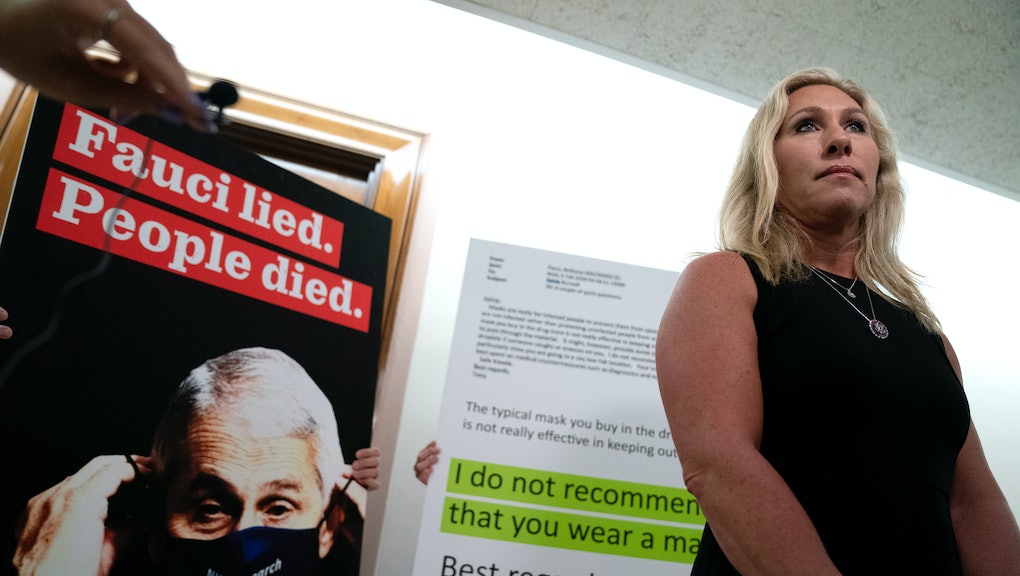 Rep. Marjorie Taylor Greene, leader of the fictitious QAnon caucus and the somehow very real and weirdly fascistic America First Caucus, has turned her Twitter feed into a misinformation super-spreader site, so Twitter has quarantined her. On Tuesday, the congresswoman who has made it her calling to be awful online and in person got hit with a temporary suspension for posts that violated the platform's rules regarding sharing misleading information about coronavirus. The brief ban lasted 12 hours, which explains why things were suddenly so peaceful for awhile there.

It's hard to pinpoint the cause of Greene's suspension to just one tweet, because she spends most of her day shitposting and sharing nonsense that feeds into the worst impulses of the conspiracy-minded. But the temporary lockout appears to be the result of a weekend's worth of misinformation. According to Vice, Greene tweeted on Sunday, "The controversial #COVID19 vaccines should not be forced on our military for a virus that is not dangerous for non-obese people and those under 65," which is not true. She also falsely claimed that the vaccine is linked to "6,000 vax related deaths," — a figure that is based on reports filed with the CDC's Vaccine Adverse Event Reporting System, which collects self-reported and unverified reactions to vaccines. There is currently no evidence to suggest that vaccines have been related to any deaths — and even if the shots were responsible for 6,000 deaths as Greene claims, that is out of more than 338 million administered.

Those tweets were enough to get Greene suspended for 12 hours, and she had to remove the tweets before she could return to the platform. But don't worry, she still has plenty of unhinged garbage on her feed if that's what you're looking for — including several posts that Twitter has flagged with a warning message alerting readers that "this tweet is misleading."

And of course Greene turned the suspension into an opportunity to complain. Upon returning to the platform, she tweeted, "American social media company Twitter banned me for 12 [hours], censoring me, and violating my freedom of speech. You know who else silences, censors, and bans people they don’t like and want heard. Communist China."

For Greene and others like her, this is the grift. Twitter operates a platform that has set up clear rules for what kind of content it allows, as well as what the punishment is for violating those rules. Greene and her cohorts knowingly and willfully violate those rules and, eventually, get hit with suspensions and bans, which they then get to spin into cries of censorship.

It's a game for them, though it does run its course eventually. Earlier this year, Twitter introduced a "strike" system that sets out standards for when an account gets banned from the platform. Users get five strikes before they are forced off Twitter entirely. According to NBC News, Greene has "multiple" strikes already. Losing the platform entirely hurts the cause (just look at Donald Trump for proof), but these short-term suspensions are gifts to grifters who use the slap on the wrist as evidence they are being targeted and oppressed. Greene will surely play the game again — but with multiple strikes on her record already, she's on the clock for how long this can last.

More like this
For a blessed 11 minutes, Jeff Bezos was not on Earth. Here's what he missed
By AJ Dellinger
ISIS has invaded Trump-centric social network Gettr
By AJ Dellinger
Amid daily reports of catastrophe, Americans are finally starting to realize climate change is bad
By AJ Dellinger
Stay up to date