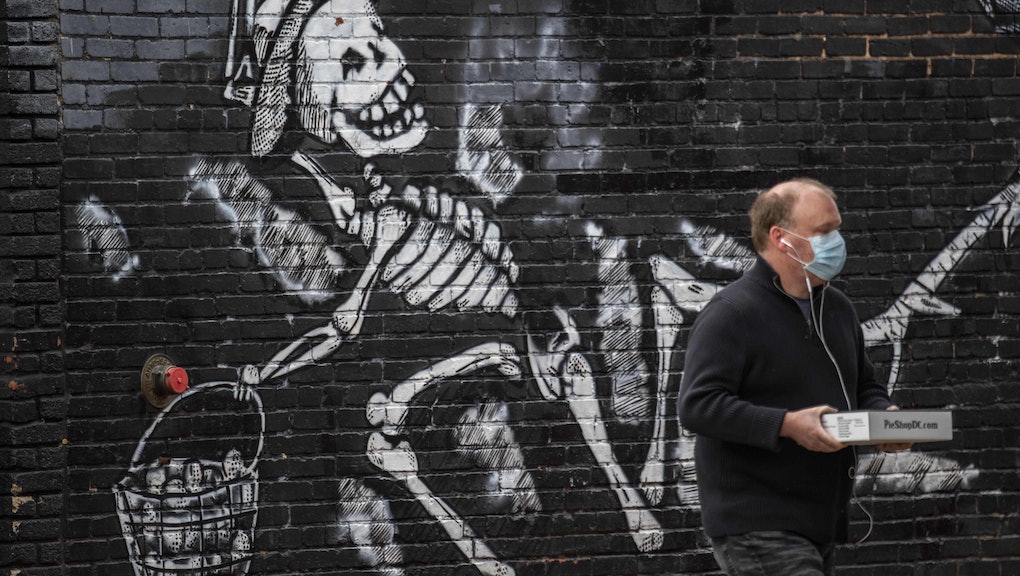 There's a lot you can say about the largely Republican-led push to "re-open" a growing list of coronavirus-affected cities and states, despite extremely dire warnings from health officials that premature easing of social distancing restrictions could have catastrophic results.

You can say that it's a craven political ploy to curry favor with a White House desperate for the appearance of competency. You can say it's capitulation to an astroturfed campaign made up of gun fanatics and far-right wing agitators. You can even say it's the latest in a long history of damaging anti-science obstinance from GOP lawmakers.

Now that the actual process of "re-opening" has begun in several states, you could say one more thing, too. Workers in these communities might now face an impossible choice: their bank accounts, or their life?

For furloughed employees who are now being given the green-light to return to work, the dilemma is as follows: Workers who choose to stay away from their recently re-opened job of, say, cutting hair or scooping movie theater popcorn, would be considered as having quit their job, despite the fact that they're not returning to work out of concerns for their health. As a result, those workers would become ineligible for CARES Act unemployment benefits.

On its website, the Department of Labor explains that formerly furloughed workers who don't dive back into their newly re-opened jobs are ineligible for pandemic unemployment assistance because:

Barring unusual circumstances, a request that a furloughed employee return to his or her job very likely constitutes an offer of suitable employment that the employee must accept.

In other words, no matter how much someone may be legitimately afraid of contracting coronavirus if they return to work, they must do so, or risk losing the CARES Act's unemployment assistance.

"I had to remember that if I do quit, I would have to lose my unemployment," a waitress at Big Daddy’s restaurant in Odessa, Texas, who requested anonymity explained to the Texas Tribune. "I had to stay in a place I really didn’t want to work at to get unemployment."

Complicating matters is the fact that different states have vastly different standards for managing unemployment benefits.

"In some states I have little doubt the Unemployment Insurance agency will respect UI claimants’ assessment that the possibility of COVID-19 infection is a legitimate reason for workers to stay home, especially in the case of workers who have risk factors for COVID mortality (old age, diabetes, etc.)," Brookings Institute senior fellow Gary Burtless told Vice earlier this week. "However, in other states, possibly including Georgia, Tennessee, and South Carolina, I would expect UI agencies to be rather hard-nosed about UI claimants’ fears of contracting the COVID-19 coronavirus."

For example, in Iowa — where University of Iowa researchers have advised Republican Gov. Kim Reynolds to not ease up on social distancing measures or else risk "catastrophic loss of life" — the state's Workforce Development agency has encouraged employers to report workers who don't return to their un-furloughed jobs without good reason "as soon as possible."

"If you parsed [Reynolds's] language, she said, 'If you refuse to return without good cause, you will be denied benefits,' and that is a correct statement of the law in Iowa," Des Moines-area employment attorney Stuart Higgins tells Mic.

But, Higgins explains, things are not quite so clear-cut.

"There is a law that says if you refuse to return to work, or if you quit, because of quote-unquote unsafe working conditions, then you still get benefits," he says. "In that circumstance, you are quitting for good cause."

Unfortunately, this opens up a large legal grey area for Iowa workers afraid of exposure to the coronavirus.

"What is the standard, the criteria, that [Iowa unemployment agency] Workforce Development is going to look at to make that determination?" Higgins asks. "Because there's going to be a bunch of people that have legitimate fears about returning to work under these circumstances, so what is that gonna mean? And the answer is: We do not know!"

As Higgins notes, workers will now be put in a position where they must decide whether or not to return to work under potentially unsafe conditions, or fight for their unemployment benefits in the courts — a process in which victory is in no way assured.

In Georgia, the situation seems decidedly similar — and equally tenuous.

"It really hasn't been tested yet as far as any type of published case law as to whether the fear of contracting coronavirus itself would be considered a good work-connected reason that would allow the claimant to resign and still draw unemployment benefits," Atlanta employment lawyer Greg Fidlon explains to Mic.

Noting that claimants could argue that their refusal to return to work was animated by some underlying, pre-existing medical condition that would put them at risk, Fidlon says that employees could also claim their employer was creating an unsafe work environment if they didn't follow health guidelines, such as social distancing, upon their return. Still, Fidlon says, because there is no blanket legal standard, anyone who would want to pursue receiving unemployment benefits even after their furlough ends would have to argue their case after working their way through Georgia's over-stressed unemployment system.

"I can tell you that the Georgia Department of Labor is absolutely inundated with calls and claims and inquiries, and I know that folks are telling me that it's nearly impossible for them to get through to anybody on the phone," Fidlon says. "Their offices are not currently open to the public, because of the pandemic, so the only way to really contact them is by phone or email or on their website. And people are having a very difficult time getting through."

Ultimately, it's a situation that seems simply untenable in the long term.

"Right now, everyone who is not working at restaurants is able to be on unemployment," Atlanta-area server Laura Jean Truman told NPR.

"But once restaurants decide to open, and if we decide that we don't feel safe going back into those restaurants, we then are no longer eligible for unemployment because then we have a job opportunity that we're turning down," Truman added.

The dilemma of choosing between having enough money to survive, and going to a job where you could contract a fatal disease, can be seen as a indictment of America's floundering response to the pandemic as a whole — and its even broader history of prioritizing economics over the health of its residents. It's one of the many paradigms we have more or less begrudgingly accepted, which the pandemic has laid bare in all its grotesquely flawed glory. The question now becomes: When this is all over, what will we do about it?

More like this
Vaccines are good. Threatening to evict someone over them is not
By Rafi Schwartz
We learned collective grief from 9/11. We could really use those coping skills right now
By Melissa Pandika
I never want Tucker Carlson to stop talking about Nicki Minaj's cousin's friend's enormous balls
By Rafi Schwartz
Stay up to date