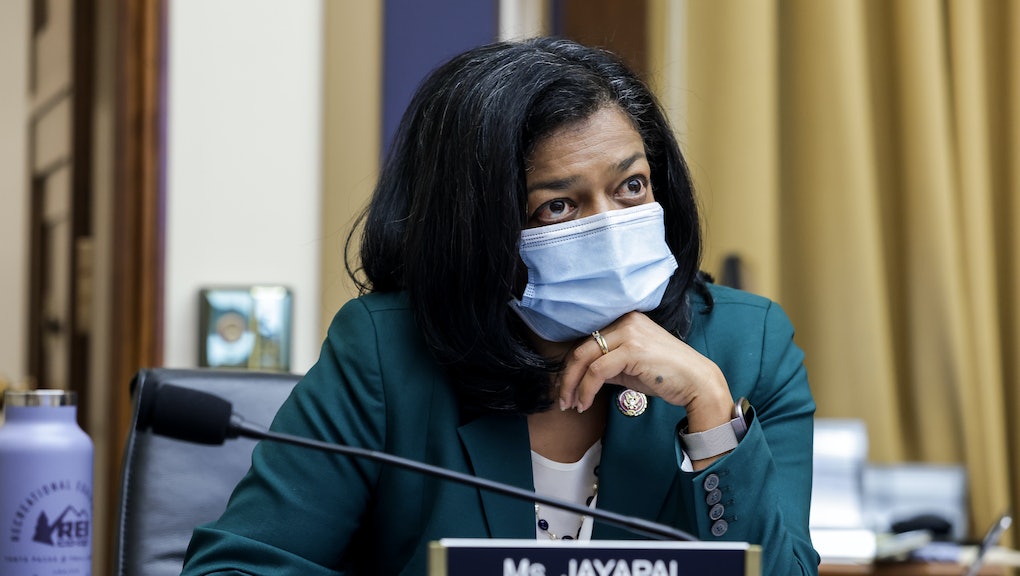 For some Members of Congress who sheltered in place during the terrifying insurrection at the Capitol building in Washington last week, another threat, this one viral, loomed large inside of their Republican counterparts. Representative Pramila Jayapal just tested positive for coronavirus, she informed the press, squarely blaming maskless Republicans that she sheltered with for her fate.

In an announcement on Monday, Jayapal called out the “selfish idiocy” of those who refused to wear masks at the Capitol while Congress was in the process of ratifying Joe Biden's electoral win. As you might’ve gathered, masks have become a some sort of strange political issue, thanks largely to the Inciter-in-chief. So pinning it on her Republican counterparts is not exactly far-fetched.

Jayapal is the second person to test positive after sheltering with maskless (careless, selfish, clueless...I could go on) individuals during the storming of the Capitol building. The first to announce their transmission and subsequent infection from what appears to be the same event, is New Jersey Rep. Bonnie Watson Coleman, who is 75 years old and a cancer survivor; it’s a double whammy of risk for her. Thanks again, naked-faced jerks.

None of it feels fair — especially the harrowing hours that cautious, rule-abiding people spent locked in a room, in fear for their lives and now for their health, knowing that there was danger lurking.

While there was a point where Jayapal was instructed to take off her mask and put on the gas masks that were under her seat, both experts and regular folk might surmise that you’re much safer in a windowless room with someone who believes in, and regularly wears masks during a pandemic surge.

“I’m quarantining now because I am convinced that where we ended up, in the secured room — where there were over 100 people and many were Republicans not wearing masks — was a supers spreader event," she said. It's unfortunately likely that the Congresswoman will be right.

More like this
This anti-vaxx doctor is seriously telling lawmakers vaccinated people are "magnetized"
By Tracey Anne Duncan
People who had COVID-19 might only need one dose of the vaccine
By Tracey Anne Duncan
Grinding your teeth? Pandemic stress might be to blame
By Melissa Pandika
Stay up to date