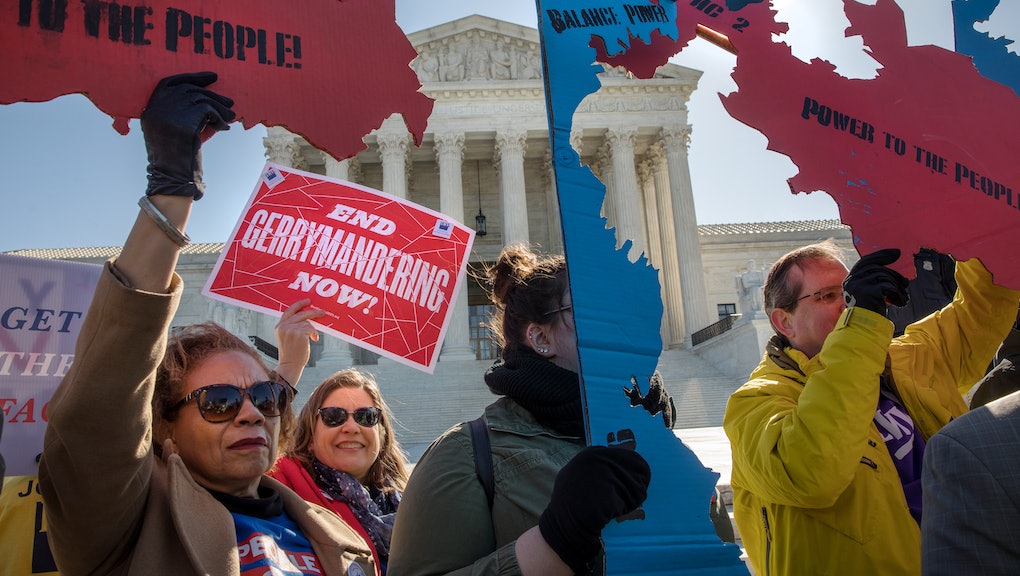 When the Democrats took control of all three branches of the federal government following the 2020 election, they did so with the slimmest margin possible — a 50/50 split in the Senate and an 11-seat advantage in the House of Representatives, which has already slipped to a margin of just eight votes, thanks to special elections and run-offs. The first test of how well that razor-thin Democratic advantage will hold will come in 2022, and it may be decided before a single vote is cast. A new study conducted by Democratic data firm TargetSmart and published by Mother Jones found that Republican-controlled state legislatures around the country could effectively take back control of Congress simply through the shady and dubious practice of gerrymandering.

Here's the problem that faces Democrats with the 2022 election season approaching: Despite having control of the federal government, the left has lost ground at the state level. Republicans control 61 total chambers of state governments, including holding a trifecta (the governorship, state senate, and state house) in 23 states. In many of these states, the party with legislative control gets to re-draw the lines for congressional districts, allowing them to create bizarre borders that serve only to set up a favorable outcome. According to TargetSmart, Republicans will have the ability to re-draw 187 congressional districts, while Democrats will only control 75.

Researchers warn that Republicans won't need to manipulate the whole map in order to swing elections in the party's favor, either. Just four Republican-controlled battleground states — Georgia, Florida, Texas, and North Carolina — could completely turn the election, with gerrymandered maps potentially setting them up to win between six and 13 House seats.

Those state lawmakers will have plenty of margin for error as they try to set themselves up for success in 2022, too. According to the Brennan Center for Justice, states at the highest risk of extreme gerrymandering — those with single-party political control and fast-growing populations — are home to 94 of the House's 435 seats. All of the highest risk seats are in states where Republicans control both the state house and senate.

Much has been made about Republican efforts at voter suppression, including tactics like imposing strict voter identification laws and restricting ballot access by eliminating early voting initiatives, banning ballot drop-off programs, and shrinking the voting window. But there may be no more powerful tool in the party's arsenal than its willingness and capability to gerrymander. The Associated Press has found that there are four times as many Republican-skewed districts across the country than Democratic-leaning ones — which explains how the GOP has managed to continue winning and holding Congressional seats despite consistently receiving fewer votes than Democratic candidates.

There is a tool for Democrats to fix this, and it's their current control at the federal level. They could pass a bill that would ban gerrymandering at the state level, something scholars have been making the case in favor of for decades. The For The People Act, which has already passed in the House of Representatives, would effectively do away with partisan map drawing. It establishes independent commissions to be established in every state for redistricting, and would require bipartisan support for every proposed map.

Banning gerrymandering should be a no-brainer. Polling from earlier this year conducted by the conservative think tank R Street found that even a majority of Republican voters are in favor of independent redistricting committees. Democrats can use the control they have right now at the federal level to ban the partisan and anti-democratic practice or they can lose their power — possibly for good — in a year. Tough call.