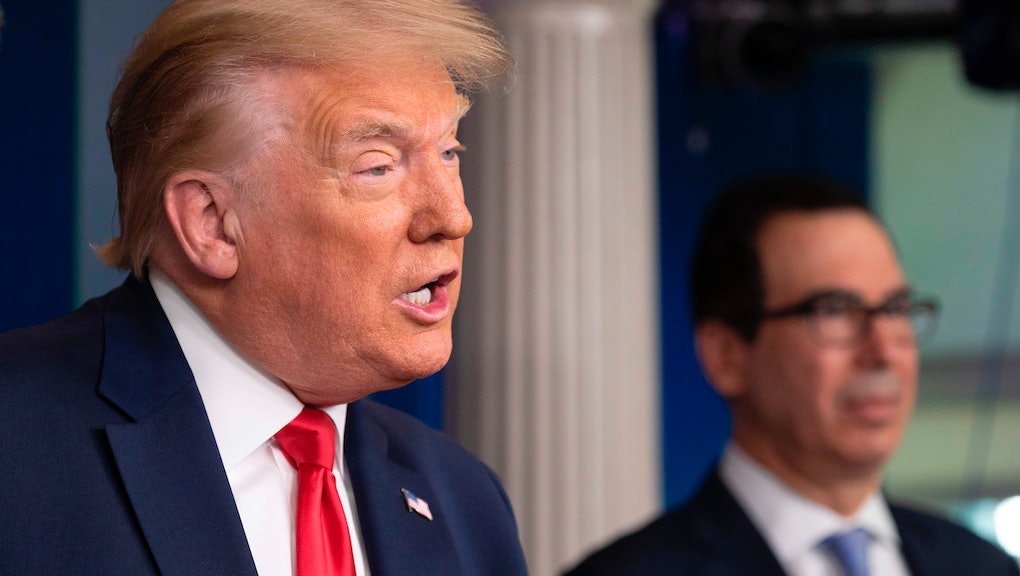 Late Monday the Treasury department revealed in a massive dump of Paycheck Protection Program data that both billionaire Democrats and Republicans benefited from the largest stimulus package in government history. The intention of the Paycheck Protection Program (PPP) was to manage the impending shock of an economic downturn catalyzed by the coronavirus pandemic by encouraging small businesses to keep employees on the payroll with funds provided by the forgivable federal loans. As it turns out, some of these small businesses weren't so small, and both sides of the aisle benefited from the ill-defined Treasury department language.

Among the beneficiaries of PPP loans were a firm invested in by Paul Pelosi, husband of Speaker of the House Nancy Pelosi (D-CA), a restaurant at the Trump Hotel in Washington, D.C., an Oklahoma Congressman's chain restaurant management company, and the law firm that represented convicted rapist Harvey Weinstein. Also, Kanye West.

According to the Treasury department, the Small Business Administration has provided over 4.9 million loans totaling nearly $522 billion dollars, funded by thousands of banks and financial institutions. In late March Congress approved the $2 trillion CARES Act, which provided billions of dollars in relief to large industries, as well as provided most Americans with $1,200 "CARES Act checks." The Paycheck Protection Program is one part of that congressional stimulus package, which, in accordance with the mismanagement and confusion of the other financial parachutes, was almost immediately marred by claims of businesses that were not in need of support but nevertheless applied and were approved for the loans. The government did not make immediately available the data on which businesses applied for relief and which received the requested support, and the public only learned about PPP loan recipients when in some cases businesses like Shake Shack returned their government money.

The latest deluge of information about where the federal agencies routed PPP money confirms what many already suspected: that businesses and agencies which likely would have survived the coronavirus economic depression without support benefited from knowing people in high places. A number of churches connected with Trump administration employees received at least $17.3 millions in loans. Notably, while the Treasury department says that such loans allowed 50 million Americans to retain their jobs, the Plano, Texas Prestonwood Christian Academy said that they didn't save any jobs with a loan in the range of $2 million to $5 million.

It's hard to say exactly how much each of the entities received in funding, as the published data lists amounts in ranges, i.e. $150,000-$350,000 and upward. The Treasury department reported that while the larger dollar amounts may grab headlines, 86.5 percent of all loans were for less than $150,000, with the average loan amount totaling $107,000. The federal agency declined to list the recipients of loans under the $150,000 mark.

"We are particularly pleased that 27% of the program’s reach in low and moderate income communities which is in proportion to percentage of population in these areas. The average loan size is approximately $100,000, demonstrating that the program is serving the smallest of businesses," Treasury secretary Steven Mnuchin said Monday in a press release.

While the data provided isn't fully conclusive, it does reveal another truth about the growing class divides in the U.S., where businesses and politically connected types have access to financial supports just not available to low-income and poor people. This week, groups reported new information about the growing concern of food insecurity in Latinx and Black families, and Congress continues to quibble over the merits of investing in a comprehensive vote-by-mail process to secure November's presidential election. In the coming weeks, Congress will attempt to carve out another economic relief program before the August recess hits, though it remains to be seen if people in need of support will get it.

More like this
FEMA said it would reimburse cities for housing homeless people. Most cities ignored the offer
By AJ Dellinger
The CDC's eviction freeze has been unfrozen by a federal judge
By Rafi Schwartz
Biden has hit his 100th day in office. So what's next?
By Rafi Schwartz
Stay up to date