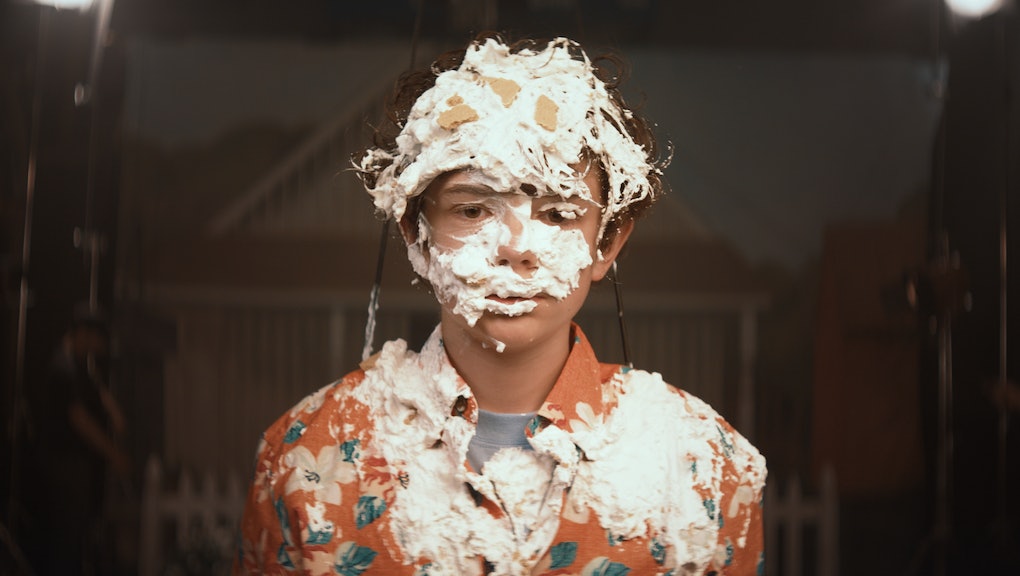 In the raucous new trailer for Shia LaBeouf's semi-autobiographical film Honey Boy, the actor explores his tumultuous childhood, revisiting his troubled past in a fictionalized matter to come to grips with the resulting trauma. If you've haven't closely followed LaBeouf since he rose to fame as a child actor during his Even Stevens days, the movie might feel like a stark departure from the Shia you've known and loved for years – though, in a way, that's exactly who this movie was made for.

The lengthy bit of new footage explores LaBeouf's Disney Channel days in a brief clip where star Otis Lort (obviously based on LaBeouf himself) is dressed in a familiarly gaudy button-down shirt and pied in the face. It's an obvious Even Stevens reference, but LaBeouf isn't laughing. It's the first inkling that something isn't quite right about this child star's ascent to stardom, and this peek under the mask, so to speak, seems like an intriguing look at his upbringing, even if it doesn't "star" LaBeouf as himself.

Instead, he plays a dramatized version of his father, ex-rodeo clown and felon.

“How do you think it feels to have my son paying me?,” Shia asks his "son" in the trailer, the question laced with venom.

“You wouldn’t be here if I didn’t pay you,” replies the kid.

LaBeouf enlisted the help of Noah Jupe (A Quiet Place) to take on the role of his younger self, while Lucas Hedges (Manchester by the Sea) is set to play the adult Lort. Performance artist and singer FKA Twigs has also been tapped for her big-screen debut as Lort's neighbor and confidante. With this kind of star power in place, the movie should have no trouble piecing together at least a compelling portrait of what Shia has gone through over the course of his life as an actor, his dalliances with art, and the mental health struggles he's faced over the years.

It's been a while since Shia was on-screen, so what's he been up to since gracing us with his presence? At least part of the time, he's been hanging out with Jaden Smith, who he's been friends with for quite some time. Given both Jaden and Shia's proclivities for performance art, they make a great pair.

“I’ve known Jaden since before he’s been doing the entertainment thing. I’ve known Jaden since we were playing Sonic the Hedgehog in his dad’s trailer,” said LaBeouf in a recent interview with MTV. He noted Will Smith has also been with him every step of the way throughout his time within the entertainment industry, shouting out the actor for being there, "every time he's gotten into trouble."

If you're curious about Shia's childhood trauma, his path to becoming an actor, and all the stories that unravel throughout Honey Boy, mark your calendars to go see it in theaters when it debuts on November 8, 2019. That should give you plenty of time to sift through Shia's movies to spot the references that will undoubtedly be scattered throughout this one.