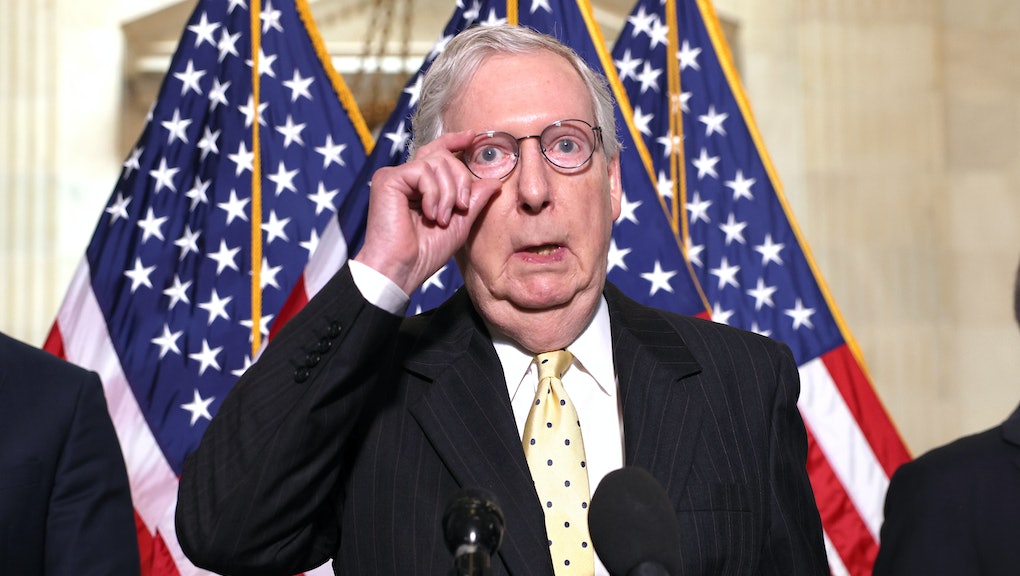 Well, it's finally here. Sort of.

Months after proclaiming — much to the partisan chagrin of congressional Republicans — plans to create a commission to investigate the Jan. 6 Capitol insurrection carried out by supporters of former President Donald Trump, Congress stands on the cusp of doing just that. And wouldn't you just know it, GOP lawmakers aren't particularly thrilled. Go figure!

"After careful consideration, I've made a decision to oppose the House Democrats slanted and unbalanced proposal for another commission to study the events of Jan. 6," Senate Minority Leader Mitch McConnell announced on Wednesday morning, just before his counterparts in the House were poised to vote on the bill that would establish the investigative body. Earlier this week, House Minority Leader Kevin McCarthy and Whip Steve Scalise each urged their caucus to vote against the bill as well — though House Democrats can still pass the legislation without any Republican support. But in the Senate, where Democrats enjoy the narrowest possible margin of the majority, the bill will need at least 10 GOP defectors to pass — something McConnell's announcement seemed designed to prevent.

"It’s not at all clear what new facts or additional investigation yet another commission could actually lay on top of existing efforts by law enforcement and Congress," McConnell continued, invoking the hundreds of criminal cases currently working their way through the legal system, all of which stem from the attempted coup that played out before the nation's eyes on in the waning days of the Trump administration.

While the GOP has long been reticent to support an independent commission to study the Trump-animated insurrection, the bill McConnell, Scalise, and McCarthy have all come out against is, ironically, largely the bipartisan work of House Homeland Security Committee Chairman Bennie Thompson (D-MS) and his Republican counterpart, Rep. John Katko (N.Y.). The measure in question already represents significant capitulations from Democrats to Republican demands regarding the make up and powers given to commission members. Nevertheless, Republicans seem keenly aware that the commission would codify the obvious truth that former President Donald Trump and his enablers were in large part to blame for the mob that ransacked the halls of Congress and threatened to lynch lawmakers, including his own Vice President Mike Pence.

Even the GOP's ostensibly "centrist" members — like Utah's Mitt Romney and Maine's Susan Collins, for whom diehard conservatism is cloaked in the barely-there veneer of moderation — have started hedging against the commission, saying they still support "the concept." Just not, it seems, the actual thing.

Meanwhile, South Dakota Republican and Senate Minority Whip John Thune let slip any pretense of procedural objections and made plain that opposition to the potential independent commission was in no small part a political decision. The commission could, he warned, "be weaponized politically and drug into next year," according to CNN. It's a sentiment echoed even more in-artfully by Texas Republican Sen. John Cornyn, who said simply that if the commission's work were to extend into next year's midterm elections, "That would be the Democrats' dream."

"I generally don't try to help Democrats," he added.

The GOP's political calculations — craven as they may be — are understandable, given the overwhelming proliferation of blatantly false narratives about the events of Jan. 6 within the party's core voters. Those vectors of disinformation, created and amplified by the former president himself, were echoed by Trump on Tuesday evening, when he urged Republicans to vote against the commission.

"It is just more partisan unfairness and unless the murders, riots, and fire bombings in Portland, Minneapolis, Seattle, Chicago, and New York are also going to be studied, this discussion should be ended immediately," Trump wrote on his personal blog.

Republicans are now in the impossible position of having to choose between angering their Trumpian base by voting for the commission or having their vote against the commission wielded as an electoral cudgel the next time they're up for another term. What a shame. If only they could have seen this coming. Oh well!

This article was originally published on May 19, 2021

More like this
There are already 19 QAnon candidates running for Congress in 2022
By Rafi Schwartz
Here's a chilling peek into just how close Trump got to running a police state
By Rafi Schwartz
Marco Rubio wants to give survivors of domestic terrorism … one year of student loan relief?
By Rafi Schwartz
Stay up to date