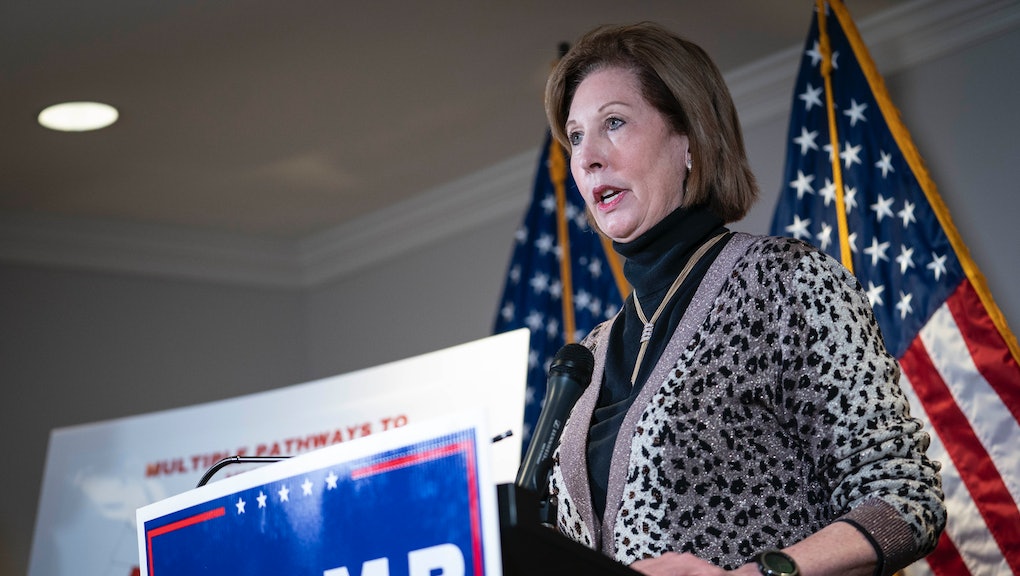 Sidney Powell, the former federal prosecutor-turned-Trump sycophant, is facing a $1 billion defamation lawsuit for falsely claiming that voting machine manufacturers participated in a massive conspiracy to steal the 2020 election from Donald Trump. Most people, when facing significant consequences for their lies, would simply stop lying. Powell has gone a different way, deciding instead to go on a press tour to continue pushing the widely debunked conspiracy theories that got her in trouble in the first place. Let's see how that's going for her:

Powell sat down with Sarah Ferguson, a reporter for the Australian Broadcasting Corporation, to discuss the ongoing legal fallout from the 2020 election. The conversation didn't last long — in part because Powell didn't want to talk about Dominion Voting Systems, the company currently suing her for significantly more than she has to her name, and in part because she couldn't even handle simple factual questions about the companies she's spent months attacking.

Asked in how many states Smartmatic voting machines and software was used in the 2020 election, Powell said, "I don't even know the exact numbers." Confronted with the fact that the company only supplied voting equipment to a single county, Los Angeles County, in 2020, Powell started to get conspiratorial. "I'm saying I think their involvement is probably a lot bigger than that," she said. Then, asked if she did any research or fact-checking to determine Smartmatic's involvement in the 2020 election, Powell accusingly asked the reporter, "Do you work for Smartmatic?"

Just to be clear on what Powell is alleging here: Not only does she claim that Smartmatic, a small and relatively obscure technology company, engaged in an international conspiracy to steal elections across the world, including the 2020 U.S. presidential election, but she's also insinuating that the company must be keeping journalists in countries where it has never operated on its payroll and sending them to smear and discredit her. Apparently when you're so heavily invested in a conspiracy theory, it's much easier to simply loop every bit of information you're presented with into that worldview instead of, you know, recognizing that you might be wrong.

Anyway, things didn't go any better after that. Powell stopped the interview after being asked why she claimed that Smartmatic owns Dominion Voting Systems — another thing that is not true — and called the line of questioning "wholly inappropriate."

When the reporter coaxed her back to the set, things only got worse. Ferguson laid out just how widespread the conspiracy to steal the 2020 election would have to be in order for it to work: It would need to involve the FBI, the Department of Justice, the Department of Homeland Security, the attorney general, and thousands of election officials across the country. At that point, Powell did everything but put on a tinfoil hat. "It was essentially a bloodless coup where they took over the presidency of the United States without a shot being fired." Who is "they" in that sentence? Good question! Ferguson asked, but Powell didn't know, only saying that "it's a significant number of 'they,' and they knew exactly what they were doing, and they planned it for at least three years."

It seemed like Ferguson had heard enough at that point. She asked, "Do you ever hear yourself and think it sounds ridiculous?" Powell said no. "I know myself very well, I've been in me a long time." Ah, yes, that definitely doesn't sound ridiculous. Case closed there.

Powell will likely be spending quite a bit of time in court for the foreseeable future as she and others, like Rudy Giuliani and MyPillow CEO Mike Lindell, face lawsuits for spreading misinformation about the 2020 election. For her sake, she better hope that she handles questions on the stand better than she did questions in front of the TV crew cameras.