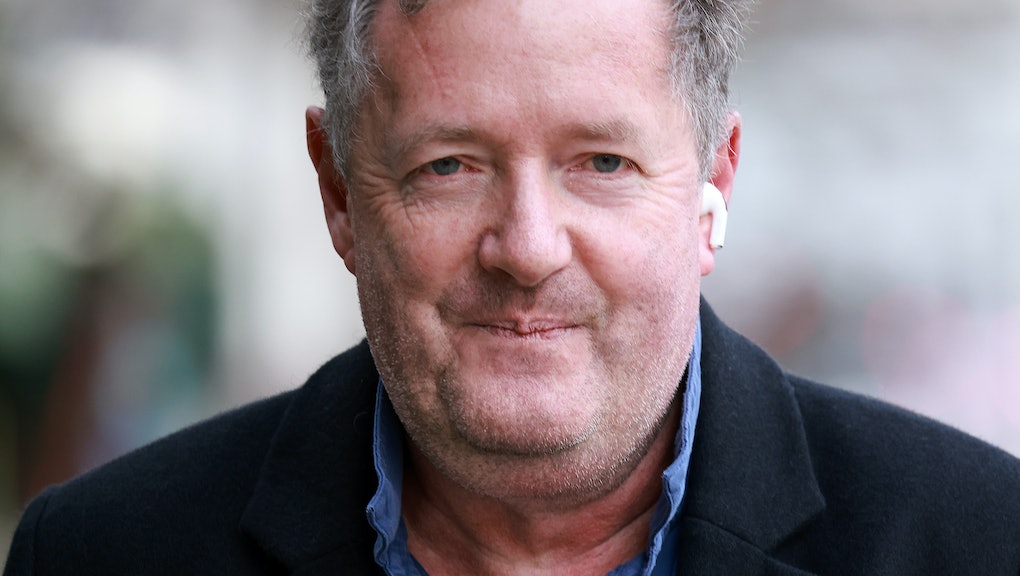 Simone Biles is still a hero, and Piers Morgan is still garbage

Piers Morgan is like a yeast infection that just won't go away, no matter how hard you try. He is the nagging itch on humanity, who somehow always remains gainfully employed because the world, despite its seven wonders and occasional triumphs of humanity, is a cesspool of gossip and drama. He proved this yet again by taking to British gossip rag, The Daily Mail, to publicly harass Simone Biles after she withdrew from the finals of the individual gymnastics competition at the Olympics, taking a huge step forward for athletes everywhere protecting their mental health and demanding to be respected as people, not commodities.

Team USA went on to take home silver in the gymnastics competition, and also had Biles' back with the USA Gymnastics team ending its official statement on the matter with, "We wholeheartedly support Simone's decision and applaud her bravery in prioritizing her well-being. Her courage shows, yet again, why she is a role model for so many." Piers on the other hand just could not handle a young woman prioritizing her health and instead decided it was offensive for Biles to remove herself.

The grossest part of Piers' little blog was that the cornerstone of his frustration is Biles' confidence. Yes, you read that right. A British TV host in his mid 50s who has done such dignifying things as editing gossip magazines and winning Celebrity Apprentice takes issue with a 24-year-old reigning champion of the world in gymnastics being confident. Piers writes, "I like my sporting champions to be cocky little devils, especially when they've got the ability and medals to back up the rhetoric. And they don't get much cockier than Ms Biles. When I interviewed her on Good Morning Britain two years ago, she radiated so much self-confidence I thought she might self-combust on set." He was also especially upset that Biles' line of leotards have goats on them, to represent the acronym Greatest of All Time, of which she poignantly said, "I want kids to learn that, yes, it's okay to acknowledge that you're good or even great at something."

The former Good Morning Britain host is no stranger to feather ruffling; it's essentially his entire brand. But to be so bold as to write an entire piece attacking a young, decorated woman who is protecting her mental health in what is decidedly the most stressful, grueling competition in her field, in which she is also the most scrutinized star, is astronomically obscene.

It's also incredibly ironic, as Piers moralizes quitting to such a high degree, and yet he walked off of the set of his show and parted ways with Good Morning Britain after a terse exchange with his co-host over the now infamous Meghan Markle, Prince Harry and Oprah sit down. After writing, "Sorry if it offends all the howling Twitter snowflake virtue-signalers, but I don't think it's remotely courageous, heroic or inspiring to quit," Piers continues by completely excusing his own actions and making it Meghan Markle's fault, or, "the person who more than any other has fueled this cynical new phenomenon of shutting down legitimate criticism by disingenuously playing the mental health and race cards," as he wrote.

He continues on to try to justify that the Simone Biles who fell in the 2018 World Championships and continued on to win was not the same Biles who made this decision. Apparently Piers is incapable of understanding that people evolve, and that three years of both growth and of cumulative, continued scrutiny might have made for a more mature Biles who is more protective of herself. But of course a grown man baby who needed so badly to pen this shit talk to an athlete who isn't even on his country's Olympic team doesn't understand one ounce of what mental health means or requires.

Another grand irony is that Piers tries to insinuate that his speaking out is what is brave. He back door congratulates himself, "Of course, no sportswriters will dare say any of this because they're all too terrified of the woke mob coming for them." He goes on to say that he knows they feel the same because they've messaged him privately, even though he presents no evidence to back that claim up. He then goes on to try and criticize Biles for cheering her team on after withdrawing, because smiling after her announcement was somehow evidence that she was fine, according to Piers. And then ends it all infuriatingly by saying that Biles doesn't know real pressure because she's not a doctor or nurse during the COVID-19 pandemic or a fighter pilot.

So I just saved you the time of having to read one of the more nonsensical inflammatory ramblings on the internet today. Simone Biles is still a champion, and all of us with sense know that. She also is heroic. Everyone needs more examples of people putting themselves and their mental health first. So go do some self care in honor of Simone Biles when you can, and let us continue to hold on tight as the rest of these eventful Olympics play out.