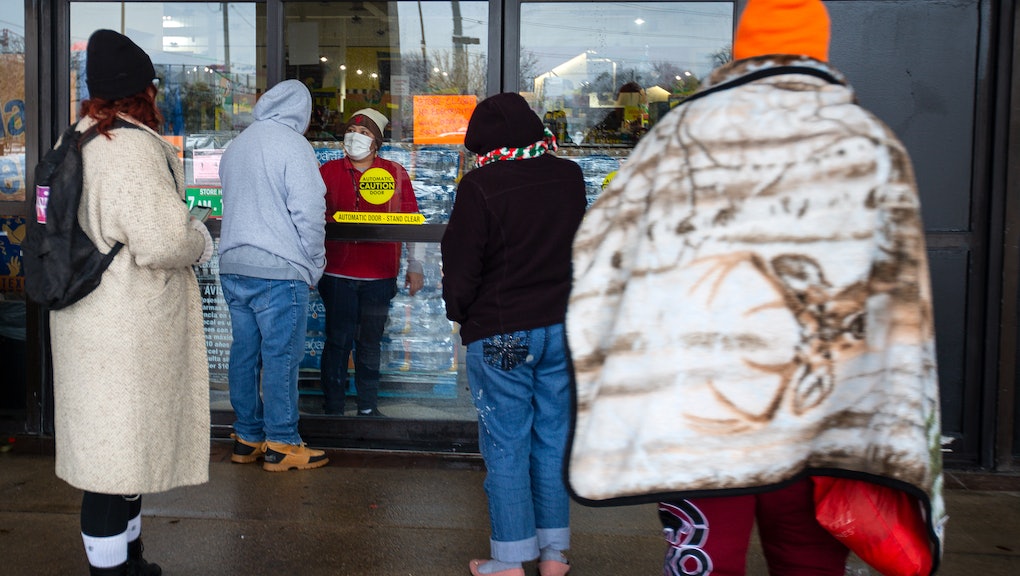 In February, Texas experienced an unprecedented winter storm that saw roads shut down from snowfall and millions left without power as the state's electric grid failed in freezing temperatures. The situation was so bad that the CEO of the state's grid operator said that the grid was mere minutes away from a total collapse. And yet, while the storm that killed at least 86 people continued, Texas oil and gas regulators spent their days circulating climate change denialism talking points, according to a report from NBC News.

The talking points, which claimed that renewable energy sources like wind and solar power are "often useless when you need them most," originated from Alex Epstein, author of The Moral Case for Fossil Fuels and the founder of the for-profit think tank the Center for Industrial Progress. Epstein, a climate skeptic and fossil fuel fanboy, reportedly provided talking points to a number of Texas politicians via email and hosted a briefing on Zoom to which a number of state officials — including Republican Gov. Greg Abbott's chief of staff Luis Saenz — were invited. According to NBC News, talking points from Epstein landed in the inbox of a number of officials in the governor's office and at the Railroad Commission, the state's primary oil and gas industry regulator.

It certainly wasn't hard to find Epstein's agenda in action. Once Texas leaders got their hands on the messaging, they ran with it. On the same day that Epstein's email hit inboxes, Railroad Commission member Wayne Christian retweeted Epstein and issued a statement warning of the "dangers of relying too heavily on unreliable, intermittent forms of electric generation like wind and solar" to meet the state's energy needs. Later that evening, Abbott appeared on Sean Hannity's Fox News show to use a deadly natural disaster to declare that "the Green New Deal would be a deadly deal for the United States of America."

Texas officials pulled this stunt over and over again, pointing to frozen wind turbines as the supposed reason for the power outage. Despite the fact that wind makes up just 10% of the state's energy production while natural gas and coal account for 72%, and despite the fact that Texas operates largely independently from any federal regulation, Epstein pushed the following message, per NBC News: "Here's the bottom line: The root cause of the [Texas] blackouts is a national and state policy that has prioritized the adoption of unreliable wind/solar energy over reliable energy."

Texas officials proved capable of regurgitating that message no problem and did so at every turn — and apparently have been for some time. NBC News reported that Epstein hosts weekly calls that Texas officials can join, and that he regularly sends climate-denying memos as part of an "Energy Talking Points" service, which gets passed around the Texas government regularly. On Feb. 22, an edition of the email with new information and praise for officials who happily spewed the previous messages landed in the inbox of the spokesperson for a Railroad Commission member, who then forwarded the message to three Texas oil and gas lobbying groups with the note, "Talking points from Alex Epstein. Not sure if y'all call in to his calls but wanted to see what he sent out today."

It should come as no surprise that Texas officials are so cozy with someone so heavily invested in promoting fossil fuels. After all, Abbott himself apparently took meetings with a right-wing, anti-science meteorologist as the winter storm was about to hit. Oil is Texas's primary export, so it has a vested interest in defending the dirty-burning energy source.

Still, it’s a little shocking just how brazenly they eat this shit up and how transparent they are about pushing bad information. Epstein provides talking points, officials go repeat them, and then Epstein points to these officials backing what he said as evidence that he was right all along. Wash, rinse, repeat.

More like this
Amid daily reports of catastrophe, Americans are finally starting to realize climate change is bad
By AJ Dellinger
Much of the American West is on fire. Again
By Vanessa Taylor
Death Valley set a new record-high temperature. But the daily lows are more concerning
By AJ Dellinger
Stay up to date