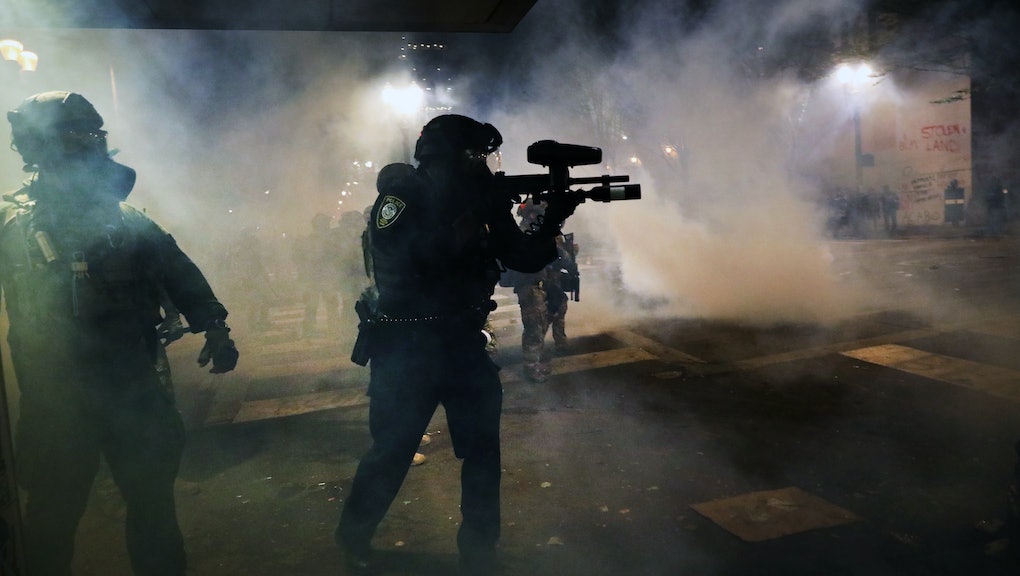 The American Civil Liberties Union announced Sunday its demand to dismantle the Department of Homeland Security (DHS). In a USA Today op-ed, ACLU executive director Anthony D. Romero argued that the department created in the aftermath of the 9/11 terrorist attacks is a dangerous and unchecked expansion of federal power. It's the first call, in the wake of police defunding efforts, to dismantle a federal agency.

Over the past two decades, DHS has grown to encompass a number of regulatory and policing duties mostly related to immigration and federal criminal behavior. However, Romero wrote that as the department has grown, the federal government has actually subverted the rule of law and criminalized immigration. The op-ed points to the horrifying sequence of events in Portland, Oregon, where federal agents akin to "paramilitary" forces descended on the city to quell protests against police brutality and systemic racism. Their violent, unchecked — and as the ACLU argues, unconstitutional — actions were not atypical for DHS officers, Romero wrote.

The federal presence in Portland, which the Trump administration argued was an effort to enforce security, is nothing short of a veiled attempt to securitize protest and suppress political dissent, Romero said. The actions of the federal department used "the veil of 'security' to target communities of color and immigrants," he says.

DHS oversees a number of federal agencies, including Immigrations and Customs Enforcement, Customs and Border Protection, and Citizenship and Immigration Services. These organizations, the ACLU points out, are responsible for the ongoing humanitarian crisis at the U.S. southern border with Mexico, including carrying out Trump's controversial "Remain in Mexico" policy.

ICE is also responsible for the latest crisis, in which agents were holding unaccompanied children at three hotel sites in border towns before expelling them to their home countries without notifying parents or guardians. CBP, meanwhile, has been cited for having allegedly made a woman give birth while standing up and for killing children on the border with impunity.

Romero argued in the op-ed that it should not be legal for a federal department to criminalize protest or act in extrajudicial ways that put people, especially immigrants, in harm's way. "Why, for example, is an agency responsible for citizenship and immigration under a threat-oriented department? Immigrants are not a threat to the 'homeland,'" he wrote. The solution Romero proposed is to break down DHS into its component parts, which would "restore greater balance to our system of checks and balances."

It's not the first time a group with a national platform has called to dismantle or abolish DHS or its agencies. A number of high-profile Democrats in Congress have called for abolishing ICE, including Reps. Alexandria Ocasio-Cortez (D-N.Y.) and Ilhan Omar (D-Minn.). However, ICE and Trump have long been admirers of each other — ICE's union endorsed Trump in 2016 — which means that DHS will likely remain intact for at least the next few months.

More like this
Lara Trump's border solution is for people to "arm up and get guns and be ready"
By Rafi Schwartz
Kamala Harris's trip to Guatemala highlights Biden's impossible task on immigration
By Vanessa Taylor
A Philly foster agency can continue discriminating against LGBTQ families, SCOTUS rules
By Rafi Schwartz
Stay up to date