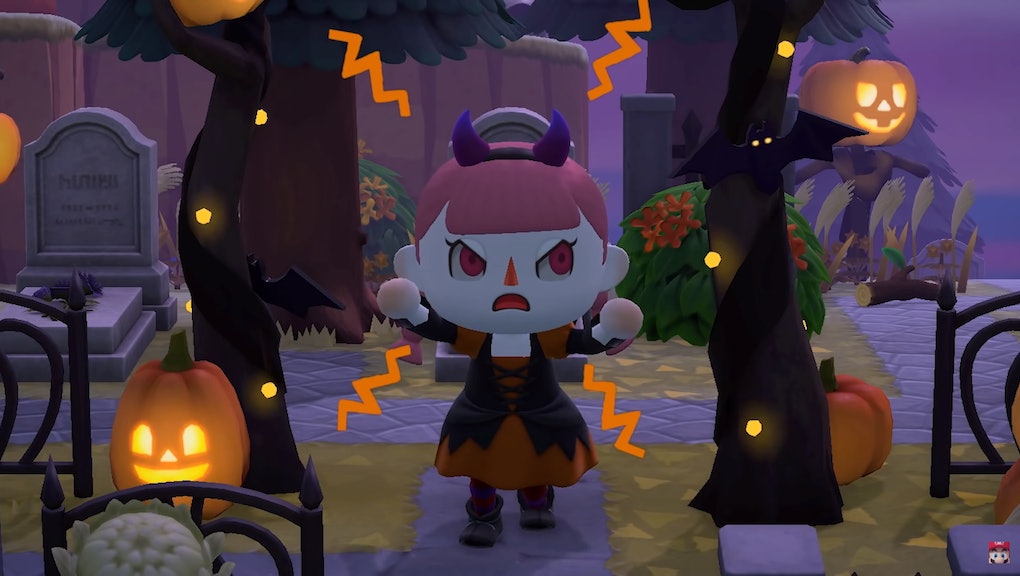 The 'Animal Crossing' fall update is all about Halloween

Halloween is just a few weeks aways, and Nintendo has announced an Animal Crossing: New Horizons fall update that will introduce a busy month of decorating, costuming, and pumpkin farming starting September 30. The update comes at an especially welcome time, as the CDC has already (appropriately!) poured cold water on the idea of door-to-door trick-or-treating, meaning we'll be needing our Animal Crossing islands to live out yet another pastime ruined by current events. Hey, at least we can still invite friends to our digital paradises. Silver linings and all that.

Halloween prep on the island

Once you download the update, you'll be able to check out a plethora of new Halloween-themed options available in the game. The Able Sisters shop will have costumes available for sale if you're not keen on making your own.

Body paint and colored contact lenses can also be exchanged for Nook Miles during October.

Villagers might also give out new DIY recipes during the month so you can get an idea of what sorts of things to craft.

Nook's Cranny will start to sell candy as well, so stock up and hand it out on the big day.

Farming and crafting your pumpkins

A lot of super creative people have already done some super creative things to mimic a pumpkin patch on their islands, but don't worry if you're no good at customizing your own pumpkin pixel art: Nintendo has brought the pumpkins for you.

Leif, the garden shop sloth, will start selling pumpkin seeds year-round so you can grow, harvest, and craft décor with them.

Players are already getting hyped and have set aside spots on their islands for glorious pumpkin patches.

Looks like it's time to turn any blank spaces into the perfect welcoming zone for the Great Pumpkin.

When Halloween finally arrives on October 31, players can gather with the rest of the islandfolk in costume after 5 PM to meet Jack, the "czar of Halloween." You can earn rewards from him by giving him candy and lollipops.

You can Trick-o'-Treat with other villagers by giving them candy, too, or you can dare them to trick you instead. This will also be a great opportunity to learn some new reactions for your character.

Other quality of life updates

With the new update, players will also be able to revisit islands they've visited in their dreams.

There will be an update for the NookLink Service on your smartphone, too, that will let you react to things in-game via the app. This is pretty neat, because it looks like it'll make it easier to make your character emote without stumbling through the reaction menu.

After all the Halloween parties, Nintendo says players can expect another big update in November, presumably for the Thanksgiving and Christmas (or the in-game equivalent) holidays. Until then, here's to digital candy and costumes.