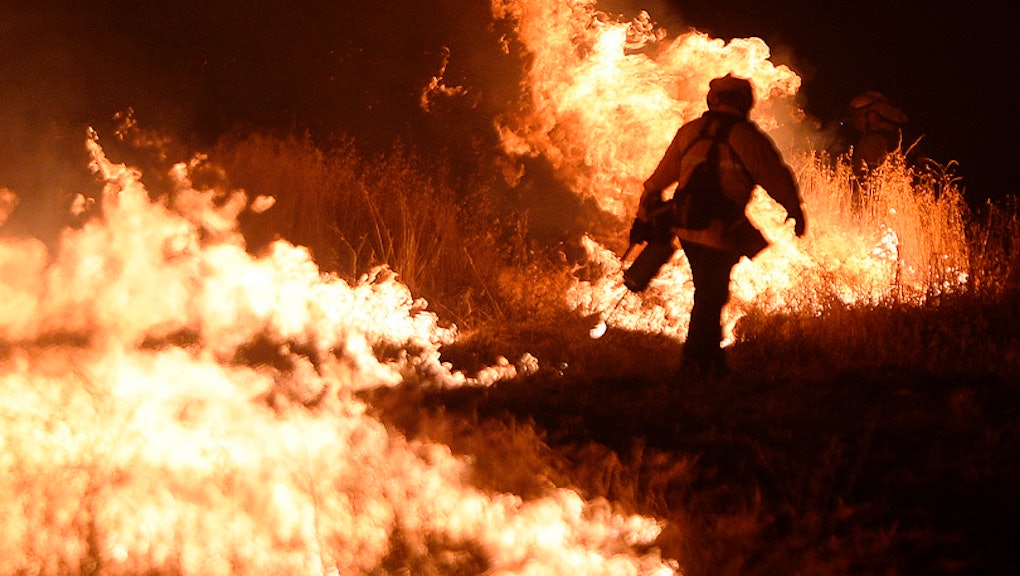 The August Complex wildfire is now over one million acres huge. Only 54 percent contained, it is an absolute beast that covers seven counties in California. It's so large that Cal Fire has divided it into four zones to make thorough reports on each section. There are numerous evacuation orders for people within these areas, and nearly 245 buildings have been destroyed from the fire.

According to climate scientist Daniel Swain, there have only been five fires of this magnitude ever recorded in the U.S.

One million acres makes it the state's first modern "megafire" or "gigafire," depending on whom you ask. The August Complex fire is so big that it's difficult for people to wrap their heads around, and some have started debating whether it's a "mega" or "giga" fire. Reports have already started using the word "giga" for its powerful impression — which, frankly, is somewhat appropriate considering a million acres are burning — but some experts have questioned whether they're using the right terminology. Technically, the prefix "mega" refers to a million and "giga" means a billion. So a million-acre fire should be a megafire.

But, in layman's terms, "mega" means huge and "giga" is huger than huge, so the August Complex fire has been called both.

All together, wildfires in the state have burned over four million acres this year. California Governor Gavin Newsom called it a testament to the reality of climate change.

The Trump administration does not seem to agree. In a mid-September meeting between California officials and the president, the state's natural resources secretary asked President Trump to acknowledge the impact of climate change on the lengthening, and strengthening, wildfire season.

The president was dismissive. "It'll start getting cooler, you just watch," he responded. When the secretary said that the science didn't agree, Trump got a last word in before changing the subject: "I don't think science knows, actually."

Such dismissal is no doubt discouraging, or just plain exhausting, to the folks suffering losses and having their lives disrupted due to these extreme weather events.

The New York Times correspondent Jack Healy, who has been reporting on the fires, described the California fires in an interview as one terrible event on top of other terrible events like the pandemic. And people are tired of it.

"These feel like very 2020 fires," he said. "It is not just that they've killed more than 30 people — including multiple children — and broken apart communities and destroyed everything people have worked for their whole lives. They are compounding the pain and stress of an incredibly difficult year."

The very 2020-esque divisions of the nation is also influencing the residents' behavior during the catastrophe as well.

"The country's angry, paranoid polarization even seeped into how people responded to these fires," Healy explained, adding that "misinformation about antifa-led arsons prompted some homeowners to defy evacuation orders, set up militia-style checkpoints in their neighborhoods and really amped up feelings of suspicion and anger in some places" during a time when people would've benefitted from working together.

Nearly 1700 firefighters within the state are continuing their efforts to control the burns wherever they can.

In the meantime, residents along the West Coast have to take caution when going out due to health hazards from both smoke inhalation and coronavirus. If an evacuation order is issued for your area, please take it seriously.

More like this
We might blow past the Paris Agreement's warming threshold before 2025
By AJ Dellinger
Another reason to legalize weed: It'll be better for the environment
By AJ Dellinger
The G7 countries promised to go green, then poured money into fossil fuels instead
By AJ Dellinger
Stay up to date