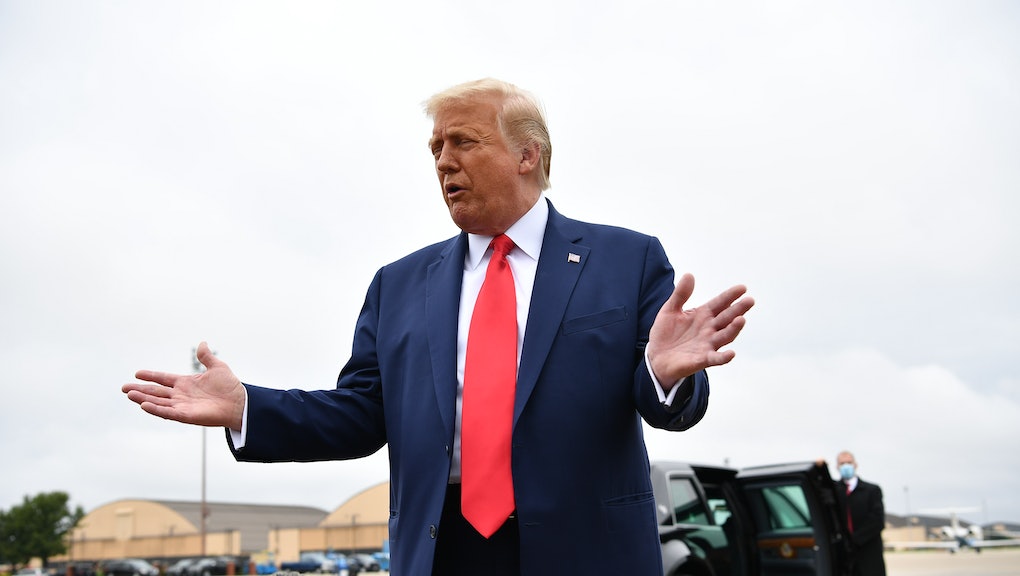 This new poll shows Trump trailing where he should be winning

While President Trump is going all-in to court the suburban vote just two months out from the general election, it looks like his messaging isn't working as planned. A newly released poll from the University of Southern California Dornsife Center for Economic and Social Research paints a scary picture for Trump — namely, that his 2016 tactics of fear-mongering and racist attacks aren't working to sway voters he needs on his side this time around. More than that, Trump's Democratic opponent, Joe Biden, isn't losing voters in large cities to Trump, a bloc the president would need to win to make up for his losses.

According to the USC poll published Tuesday, Trump is trailing or underperforming in key — and surprising — electoral demographics. In particular, Trump is losing ground with men, tied with Biden among voters without college degrees, and trailing by a whopping 13 percentage points when it comes to suburban voters overall. Even with the poll's 1-point margin of error, the results show that Biden is winning suburban voters handily.

"Obviously it’s still early and we don’t know the full impact and future course of the ongoing racial strife and the two nominees’ reactions to it, but one thing is clear: Trump starts the fall campaign in a weaker position than any incumbent since George H. W. Bush," said Robert Shrum, director of the USC Dornsife Center for the Political Future, in a release accompanying the results.

It is unclear how much of an impact the ongoing racial uprisings — including Trump's tacit support of white militia members — have on voters. The online poll was conducted Aug. 11–Aug. 29, and Jacob Blake was shot by police in Wisconsin on Aug. 23. The poll was also ongoing during both the Democratic and Republican nominating conventions, though it looks like Trump's ultra-patriotic messaging didn't sway voters as planned. By the time the RNC started, Trump was trailing Biden by 14 percentage points in USC's poll, though he won back some Republican-leaning independent voters after the convention, the poll shows. (For truly undecided independent voters, the conventions didn't seem to push them in either candidate's direction.)

Additionally, the poll was conducted leading into the sixth month of the coronavirus pandemic, which has claimed over 180,000 lives in the U.S. so far, touching voters in nearly every neighborhood. Regionally, the poll demonstrates a shift in rural and suburban areas. Trump is behind Biden by 13 percentage points in suburban areas, and among white suburban voters, the two men are tied. Trump won white suburban voters handily in 2016, and he's relying on their support for re-election.

In a somewhat surprising turn, the poll found that Trump is also slipping when it comes to voters in agricultural regions, and has seen his lead fall from a 3-1 to less than a 2-1 lead. White women voters, 53% of whom voted for Trump in 2016, are also slipping away: Compared with four years ago, Trump has experienced a 9-point drop among rural white women. Overall, the poll found that Trump's lead over Biden among white voters is just half of where he was against Hillary Clinton in 2016.

Even in small towns, the president is not winning by the numbers he needs to be in order to feel comfortable about his re-election prospects. Trump is currently leading Biden 48% to 45% among small town voters, which USC considers a statistical tie. In 2016, Trump won these voters by 6 percentage points.

Perhaps most interestingly, Trump is losing among men, a group he secured easily four years ago. Trump hasn't explicitly campaigned to male voters in the same ways that he's attempted to specifically speak to suburban women and rural voters, and it shows: Biden's lead among male voters sits currently at 49%-45%. It's not a lead that's as shocking as that of suburban voters, but even the mere presence of a shift in candidate preference is qualitatively significant.

Of course, two months is a lifetime in campaign world, and it's highly likely that the pandemic and ongoing social justice uprisings will shift voter opinions well into October. However, the strong leads that Biden holds among key groups coupled with the losses on Trump's side represent challenges that will be difficult for the president to overcome.

More like this
This poll shows just how strong Trump's hold on Republican voters is
By AJ Dellinger
Trump thinks Robert E. Lee would have been great in Afghanistan
By Rafi Schwartz
Wow, Donald Trump is actually following through on a threat to sue someone
By Rafi Schwartz
Stay up to date