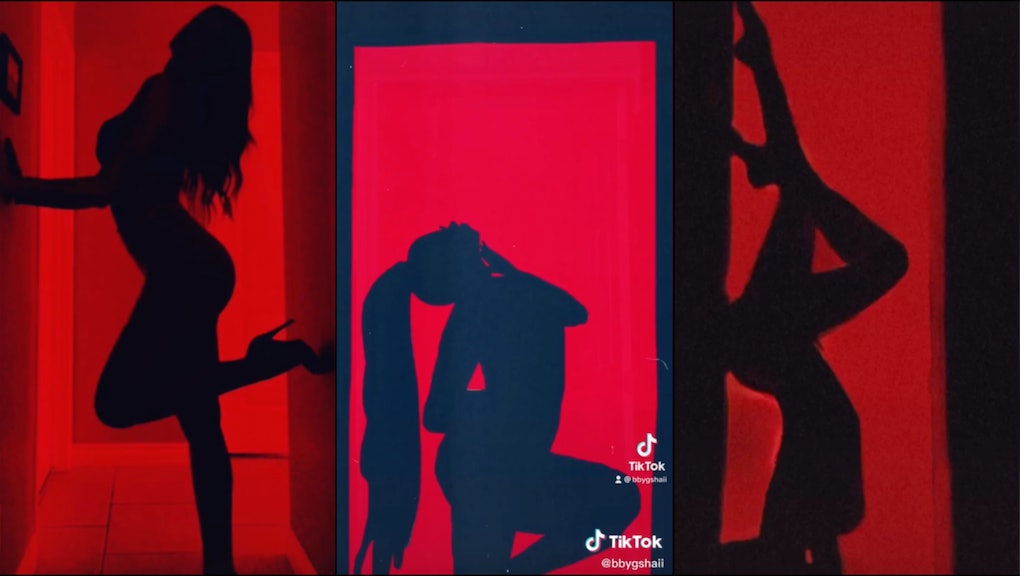 What’s safe to post online these days? Eons ago, when the ‘net was in its infancy, people — especially women — were taught to be careful about what they shared. “Your pictures on the internet will haunt you forever,” went the received wisdom. Now, in 2021, we are in a new age where twerking TikToks and sexy Instagrams are commonplace, without needing to be explained let alone defended, and many women make rent by selling their nudes on OnlyFans. And yet still misogyny finds a way: singers sharing steamy 'grams find themselves publicly shamed and paramedics with a night hustle get outed by tabloid news outlets.

I make these points to underscore how reprehensible, yet unshocking it is that creeps are weaponizing the viral Silhouette Challenge on TikTok by removing its signature red filter. Buzzfeed News found dozens of video instructionals on YouTube teaching people how to use editing software or apps to change the contrast and color of the videos to reduce the silhouette effect and expose users’ bodies. Reddit already banned a forum dedicated to collecting edited videos, called r/SilhouetteUnfiltered. Twitter also suspended at least two accounts that were editing TikToks on request and shaming those in them.

This is especially disappointing since the Silhouette Challenge started as a flirty and empowering trend, encouraging people to celebrate their bodies, reminiscent of the frumpy-to-fabulous conceit behind the still-trending Buss It Challenge. The allure of these trends isn’t rocket science: after nearly a year of being locked inside and wearing mostly sweatpants, who doesn’t want to feel like J.Lo in Hustlers for ten or so seconds? It’s not just normies posing in doorways and flaunting their curves, either. Tiffany Haddish posted her own backlit bathrobe-to-lingerie transformation on Sunday featuring a cameo from her main squeeze, Common.

As of Tuesday, searching the #SilhouetteChallenge tag on TikTok turns up warnings alongside all the crimson-hued clips, with users advising one another that whatever they may (or may not) be wearing underneath that red filter can be easily seen by prying eyes. Nearly 100,000 people have liked a TikTok P.S.A. posted by photographer Kai Lee reminding women how easily image effects can be reverted. In a follow-up video, she noted trolls were accusing her of being a “buzz kill” and “ruining” the fun with her warning. But Lee said she’s just trying to spread awareness to young women who might jump on a TikTok trend without considering how their content could be manipulated.

It’s the dichotomy of our current day and age: The internet is a tool of affirmation and empowerment — and it's also a conduit for people with nefarious motives to prey on the vulnerable. It’s sad that the Silhouette Challenge devolved into such a depraved and focused violation of these women’s consent. But the internet remains a strikingly misogynistic place, so it's also not very surprising either, unfortunately.

More like this
What is sploshing, the food fetish that's taking over TikTok?
By Melissa Pandika
If "Today Is America" then what the hell is tomorrow?
By Rafi Schwartz
There are QAnon NFTs now, because one grift deserves another
By AJ Dellinger
Stay up to date