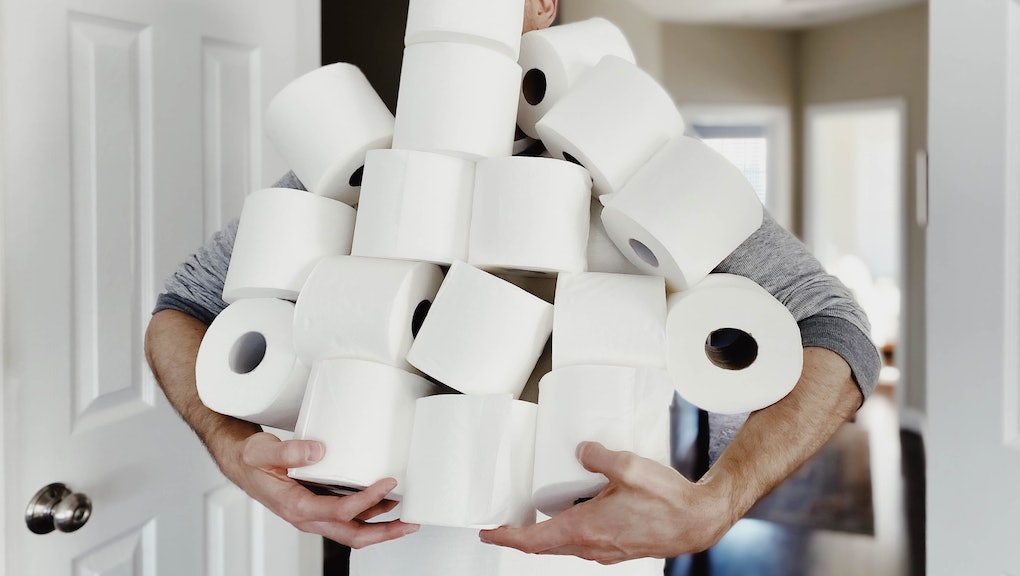 Watching people respond to the Delta variant is like replaying a horror movie in fast forward. We can cover our eyes with our hands, but this time around we don’t even need to peek between our fingers to see the chaos. Collectively terrified about what the fall might hold, we watch in helplessly as some people remain foolishly maskless in high risk situations, pre-season their livers with vodka, and perhaps most upsettingly, hoard toilet paper.

Yes, friends, despite all the things we claim to have learned about ourselves, the virus, and the world, as we circle back through actually dire circumstances, it seems we still try to cling to the most ephemeral of fetish commodities. For some, perhaps, the very fabric of reality is held together with two-ply. “Headed to Costco and I’m gonna buy all the damn toilet paper,” one person tweeted in response to a call for how to deal with the possibility of a looming apocalypse.

Luckily though, as of now, the toilet paper crisis of 2021 is mostly hypothetical. To be clear: There is currently no toilet paper shortage in America generally or at Costco in particular. What actually appears to be happening is that Costco customers are complaining about toilet paper and water shortages and purchase limits on social media and some people are reading their tweets as portents of inevitable doom. “There wasn’t any water bottle packs or toilet paper at Costco today. Sign of the times to come,” wrote one Twitter user.

However, a representative for Costco told Mic that toilet paper is available at most of their stores, and as far as I can tell, no other retail outlets in America seem to be affected. Anecdotally, when I went to the bodega yesterday, there was plenty of bathroom tissue — I was faced with that cornucopia of disposable delights. I opted to buy none, though, because I have a bidet. And you should too.

Yes, there is some evidence that we may face the threat of the empty roll again one day. According to a survey conducted on 1,000 American consumers in July, 46% said they of shoppers have built a stockpile of pandemic supplies and 69% indicated that they are considering replenishing their reserves in response to delta. Toilet paper was at the top of the list of things people said they plan to buy, reported Grocery Dive, a grocery industry data publication.

This hypothetical hoarding, however, has not happened yet, which means that — like the avoidable super mutations — we still have the power to prevent it. As we have learned in recent seasons of the pandemic, capitalism can’t save you from dying of a deadly virus and stockpiling won’t actually make you feel safe.

You know what will work? Getting vaccinated. No, that’s really all. No other options. If your poop really is your greatest concern, perhaps it’s time to build a compost toilet or learn to wipe with just one sheet until this American horror story finally comes to a close.