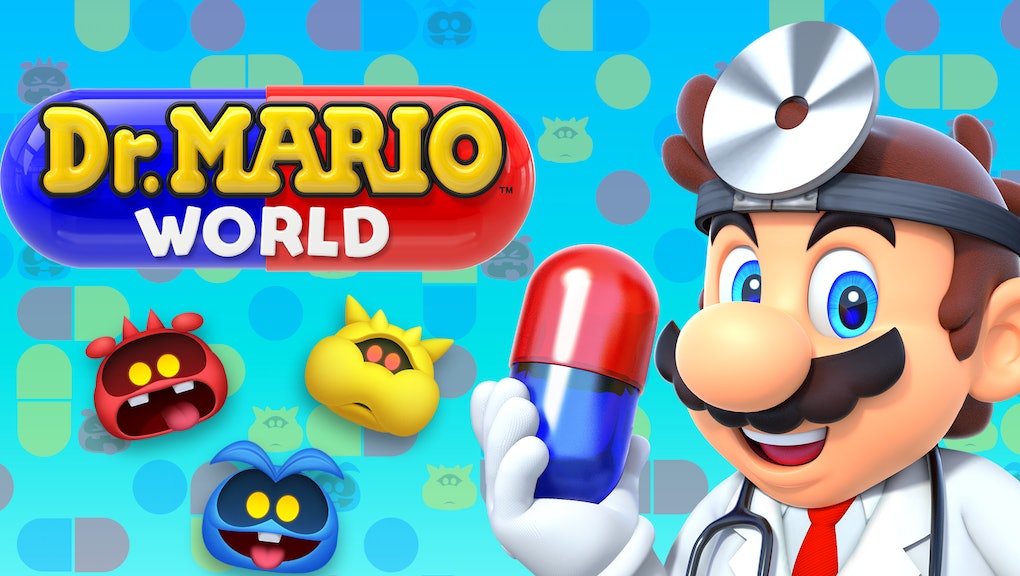 Nintendo's adding another mobile game to its portfolio next month with Dr. Mario World, and it's going to deliver satisfying puzzle action with familiar Mario characters. The latest mobile title to join Nintendo's slate of on-the-go games like Super Mario Run, Animal Crossing: Pocket Camp, and Fire Emblem Heroes is all about puzzle-solving fun as you work to clear the board of pesky virus game pieces that enter the screen, a la Tetris.

Dr. Mario World will play out much like the classic Dr. Mario title of yesteryear, but there will be a few differences to look out for. You'll destroy viruses by lining up medicine capsules with the same colors. They won't fall from the top of the screen though. These pills will start floating up the screen, and you can use a variety of different abilities, power-ups, and other items to help you make as many puzzle matches as possible.

You'll be asked to match three objects of the same color vertically or horizontally to clear them from the board. You've got to be meticulous about the places you slot in the capsules you're given, though, because you only have a limited number of them to use in the first place.

Previously, you'd typically play as Dr. Mario himself (hence the name), but now you've got the entire cadre of Mario characters to play with as well. Dr. Peach, Dr. Yoshi, Dr. Toad, and Dr. Bowser will be available to choose, each with their own unique powers. There's no word about Dr. Luigi at present, unless he's going to make some sort of surprise appearance. Perhaps he's off on his own adventures working on Luigi's Mansion 3, which was shown off during E3 2019 at Nintendo's booth. Or maybe he's not as medically-inclined as his friends seem to be.

You won't be limited to playing on your own when it comes to Dr. Mario World, either. You can send and receive special hearts that award extra stamina (which will allow you to keep playing) when in Stage Mode. You can then share your puzzle-solving prowess to your friends. In Versus Mode, you can challenge your friends to take you down in a one-on-one showdown.

Like most other mobile puzzle games, unfortunately, there will be monetization to concern yourself with. Nintendo has christened Dr. Mario World a "free-to-start" game much like Super Mario Run, which offers its first world for free, then a price tag of $9.99 upon its debut to unlock the rest of the in-game worlds to complete. Dr. Mario World will feature a stamina meter that will be sectioned off into hearts. They'll refill over time, but you can purchase a premium currency (diamonds) if you want to buy power-ups, medicine capsules, or extra time playing.

The game looks to be quite faithful to the original puzzle title with a series of appropriate modern twists, and the monetization doesn't seem to be too obtrusive. It's probably going to be best played in short bursts, so you may not really notice missing stamina as much, but it's something to keep in mind if that type of thing bothers you.

There will be five worlds when the game debuts, but Nintendo has promised there will be more coming to the game over time. There isn't a lot of information out there just yet on what type of worlds it will feature, but you can bet they're going to be challenging, just like Super Mario Run's variety of levels were.

The game will be available for both iOS and Android users via the App Store and Google Play starting on July 10. You can pre-register for the game if you're an Android user now. With Mario Kart Tour on the way to smartphones and Super Mario Maker 2 coming to Nintendo Switch later this month as well, it looks like 2019 is going to continue being the year of Mario.