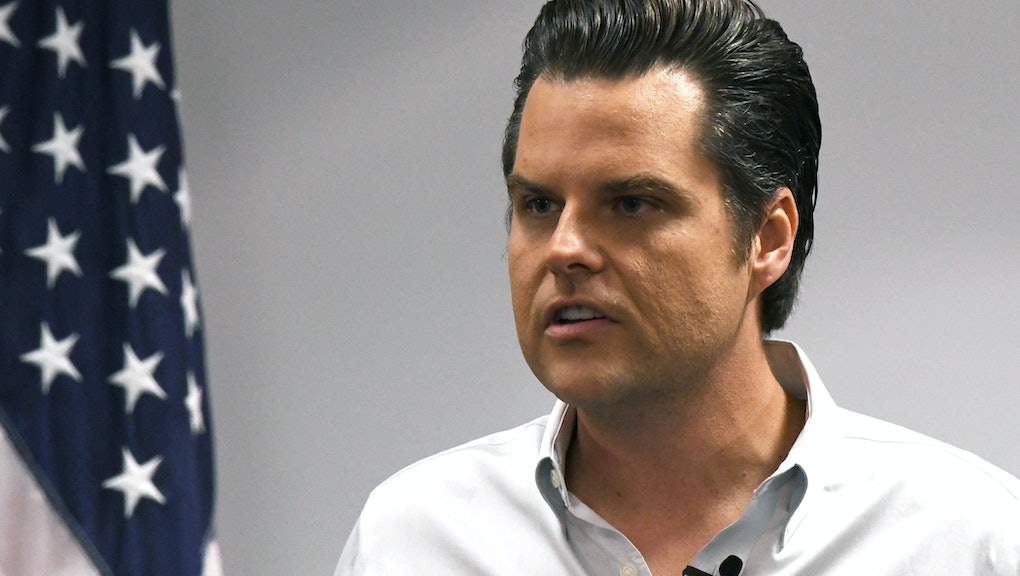 The future of the GOP isn't legislating. It's shitposting

It's hardly a groundbreaking proposition to say that after four years of Donald Trump in the White House, the Republican Party of 2021 is less an institution interested in actual legislating than it is a collection of loosely affiliated neo-fascists and enablers who have come to understand a fundamental truth of American politics in the 21st century: There are huge swaths of the country who couldn't care less about laws and Congress and "results." They want a sense of self-affirming superiority. They want mean-spirited partisan blood. They want, to put it plainly, politicians who shitpost.

Donald Trump was, and remains, the gold standard for conservative shitposting, having simply offloaded his unhinged opinions and spleen-ventings from Twitter to his personal website. But if he's the one who made the mold, there's a hungry new class of GOP lawmakers eager to break it — a point made extraordinarily clear this week, thanks to (who else?) Reps. Marjorie Taylor Greene, Matt Gaetz, and Clay Higgins, three Republican lawmakers who best embody this spirit of talking shit at the expense of doing, well, anything else.

First up, MTG, whose rich history of being absolutely bonkers online has netted her multiple Twitter bans and gotten her booted off her congressional committees. In a sweaty gym video (she loves working out!) posted to former Trump aide Jason Miller's hard-right Gettr social network this week, Greene cuts right to the chase:

"Joe Biden, you're not a president — you're a piece of shit," she spews at the camera, before briefly excoriating the president for letting the Taliban "kick your ass."

Is there a point to MTG's schvitzy shitpost? Of course not. She's simply doing what she knows works among her obsessively unhinged base: talking shit for the sake of talking shit. And she's not the only one. Here's Greene's touring buddy and credibly accused pedophile, Gaetz, speaking at a pro-Trump rally in Iowa:

What is there to be gained by Gaetz, a sworn officer of the United States government, attacking a lifelong physician with schoolyard taunts in the midst of a deadly pandemic? Nothing, except that it's like catnip for the sizeable segment of the population who simply want to feel justified for not wearing the masks or getting the vaccinations that could dramatically slow the ongoing COVID surge.

Finally, there's Higgins, a former police officer who largely came to national attention in 2017 when he called for a Christian holy war against Islam. As Talking Points Memo noted this week, Higgins spent much of his Tuesday evening in a flame war with Joel Dolphin from Alaska, after Dolphin replied to a story shared by Higgins on his Facebook page by calling the congressman a "domestic enem[y] to our Constitution" and a "sycophantic [fool]." Higgins, who evidently had nothing better to do on a Tuesday night than argue with a random guy who lives thousands of miles away, then challenged Dolphin to "locate us a ring, or a dojo," when he visits Alaska with Rep. Don Young in 2022.

"I'll give you a few rounds to make your point," the congressman concluded. "Be seeing you. Higgins out."

This is what the GOP has become: a party predicated almost entirely on internet personalities and firebrands whose main contribution to the body politic is trolling like a 15-year-old anon on Reddit. It's hardly a new phenomenon, but after this week in particular, it's hard to see the shining stars of the Republican Party as anything else.

More like this
If "Today Is America" then what the hell is tomorrow?
By Rafi Schwartz
There are QAnon NFTs now, because one grift deserves another
By AJ Dellinger
How the shock and confusion of 9/11 enabled our modern conspiracy era
By AJ Dellinger
Stay up to date