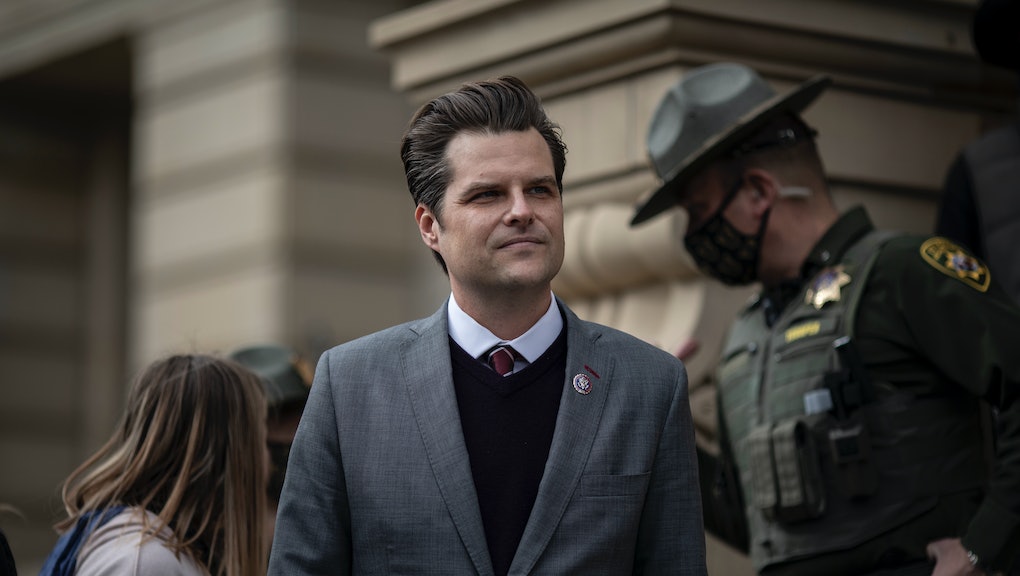 Matt Gaetz, who is definitely not a sex criminal, Venmo'd an accused sex trafficker $900

Florida (Congress)man Matt Gaetz hasn't been charged with a crime, but after last week's explosive New York Times report claiming the Justice Department was investigating the MAGA-megastar for underage sex trafficking, it seems increasingly likely that it's just a matter of time. With each drip and drop of new details regarding Gaetz's alleged solicitation of sex from very young (and possibly, in some instances, underaged) women, an overarching theme has slowly begun to emerge: If Matt Gaetz is indeed a sex criminal, he's an astonishingly stupid one.

Take, for instance, The Daily Beast's latest look inside Gaetz's financial dealings with his self-proclaimed "wingman" Joel Greenberg, the Florida county tax collector who has actually been indicted — and is prepared to accept a plea deal — for dozens of charges including sex trafficking. The federal investigation into Greenberg is what drew the DOJ prosecutors' attention to Gaetz in the first place.

According to the Beast, in May 2018 Gaetz Venmo'd a total of $900 to Greenberg over two separate transactions, the first of which he described as a "test" in the app's memo field. But, after apparently deeming that test successful, Gaetz's second payment to Greenberg included the message "hit up ___", where the blank was actually filled in with the nickname of a woman who had turned 18 several months earlier. (The Daily Beast redacted the name.)

Crucially, the next morning, Greenberg Venmo'd three young women — including the one mentioned by Gaetz — a grand total of, you guessed it, $900. Greenberg described the transactions in the app's memo section as being for “Tuition,” “School,” and “School.”

Greenberg's, shall we say, "suspiciously altruistic" payments to the young women follow a general pattern established around Gaetz and his associates as described in multiple reports claiming the congressman, Greenberg, and at least one other Florida political fixture, regularly solicited sex workers and paid — as Gaetz claimed in his carefully worded denials to allegations of sex with a minor, and utilizing prostitutes in the first place — for the women's hotels, meals, and other similar expenditures.

It's worth noting that Gaetz's instructions to "hit up" a barely legal teen in a public financial transaction with someone now on the cusp of accepting a plea deal for sex trafficking is eerily similar to the sex scandal that temporarily derailed the career of politician-turned-talkshow-juggernaut Jerry Springer nearly half a century ago. Springer, then a Cincinnati city councilor, abruptly resigned after admitting he'd used a personal check to pay for sex in both 1973 and 1974. Spiringer, however, had the good sense not to write "this check is for sex crimes" in the memo line — a bit of discretion of which Gaetz evidently chose not to avail himself.

"I have a suspicion that someone is trying to recategorize my generosity to ex-girlfriends as something more untoward," Gaetz insisted when news of the Justice Department's investigation first became public.

Perhaps. But if that's the case, why is his generosity seemingly being laundered through a man on the cusp of admitting to sex crimes and directed at a woman literally half Gaetz's age?