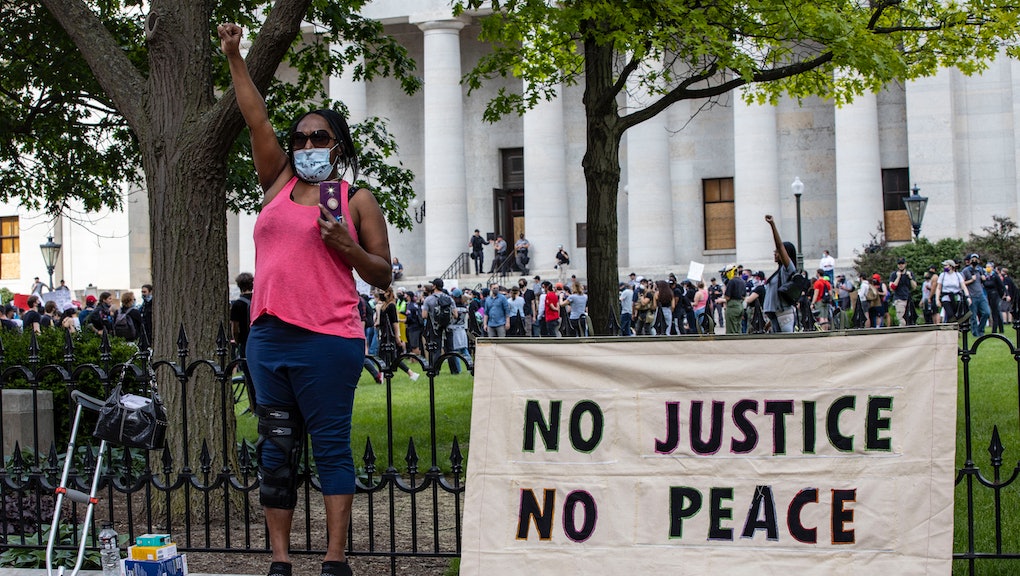 The House just passed the George Floyd police reform bill. Here's what it does.

For the second time in as many years, the U.S. House of Representatives passed a sweeping police reform bill named after George Floyd, the unarmed black man killed by Minneapolis Police Department Officer Derek Chauvin this past May.

H.R. 1280, the "George Floyd Justice in Policing Act of 2021" narrowly cleared the House by a vote of 220-212 on Wednesday evening, with only one Republican, Rep. Lance Gooden, crossing the aisle to vote in favor of the bill (he reportedly later claimed he voted for the bill by accident). Two Democrats — Rep. Jared Golden of Maine and Rep. Ron Kind of Wisconsin— opposed the measure. The slim margin reflects how decidedly different this legislative season is from the past one, in which the initial version of the bill passed by a much wider margin of 236-181, with three Republicans (deliberately) voting in favor.

Like its predecessor, the new bill aims to establish national standards for law enforcement operations, such as ending the practice of chokeholds. It also seeks to end qualified immunity for officers, making them potentially personally liable for civil rights suits, and places limits on the sale of military equipment to civilian police departments.

Speaking during debate preceding Wednesday's vote, Rep. Ilhan Omar (D-MN) made a personal appeal for the vote's passage, drawing on her experience as a Minnesotan who experienced firsthand the repercussions of Floyd's killing.

"I, like so many in community of Minneapolis are [sic] still traumatized. I watched horrified for eight minutes and forty six seconds as George Floyd's life was taken from him," she said. "Another innocent black man murdered by the police in our community. Time and time again we have witnessed the people who are sworn to protect our communities abuse their power. My city is not an outlier but rather an example of the inequalities our country has struggled with for centuries."

President Joe Biden has already signaled his support for the bill, tweeting in the days ahead of Wednesday's House vote that he "hope[s] to sign into law a landmark police reform bill."

However, as was the case with its predecessor from last year, the George Floyd Justice in Policing Act faces an uphill battle in the Senate, where 10 Republicans (in addition to all 50 Democrats) will need to vote in favor of the bill to secure a legislative victory for Democrats.