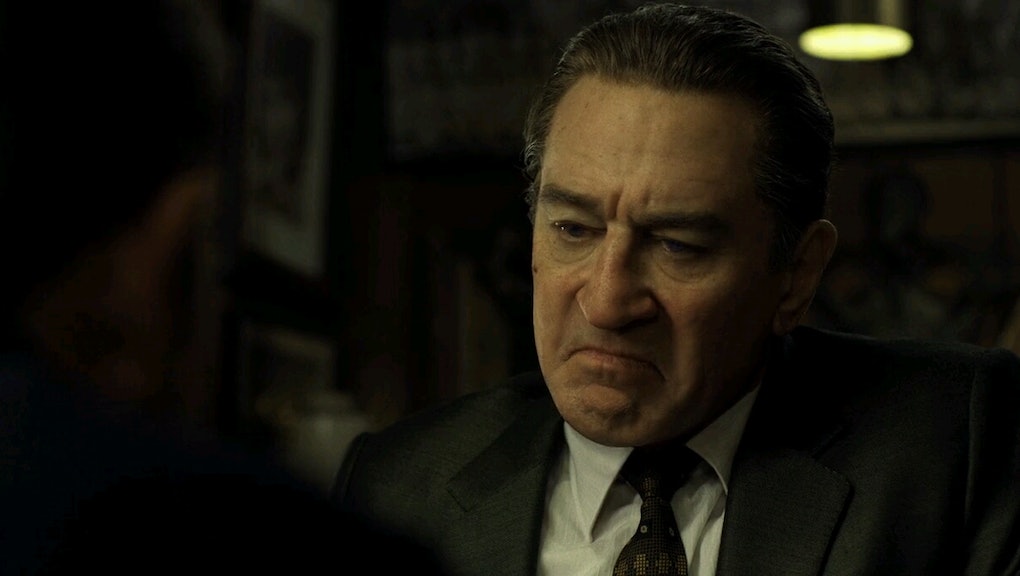 More than 17 million people watched Martin Scorsese’s mafia epic The Irishman in the first five days after it was released on Netflix, Nielsen estimates.

Still, the initial estimates suggest a pretty strong debut for The Irishman, meaning not that many people were all that put off by the film’s three-and-a-half hour runtime. Nielsen says that 751,000 people in the US finished The Irishman. That’s about 18% of its total audience, which is on par with “completion rates” for other big premieres with shorter runtimes: 18% of viewers finished Bird Box and just 11% finished El Camino: A Breaking Bad Movie.

The day after Thanksgiving, thousands of Americans and their dads evidently plunked down on the couch to watch Scorsese's Extremely Serious Film in a leftover turkey-induced daze. Friday, November 29 was The Irishman's best day, with 930,000 viewers watching the movie in its entirety.

These facts and figures are just a rough way of estimating whether Netflix, which has bucked movie industry business practices with its distribution tactics, ultimately has a hit on its hands with The Irishman. But quantifying this movie’s success is more complicated than counting ticket sales, the metric most studios still lean on. It emphasizes the wrench Netflix is throwing in the Hollywood establishment’s well-oiled profit machine.

Anyway, Netflix isn’t banking on a box office haul or DVD sales or any of the old ways movies made money. The Scorsese film, which stars Robert De Niro, Al Pacino, Joe Pesci and Anna Paquin, is a huge awards contender. Just this week, The Irishman won best-movie laurels from the National Board of Review and the New York Film Critics Circle. Netflix makes money from monthly subscriptions, and adding a prestigious original like The Irishman to its library was evidently worth $175 million to the streaming giant.

Netflix has been pretty tight-lipped about any internal metrics it has on The Irishman’s first week out, but its head of original films, Scott Stuber, told Variety that he knows “how many people signed up” for the service just to watch The Irishman, but the company’s not ready to talk hard numbers without lots of context just yet.

“We’re not hiding anything,” Stuber said. “I just want it to be articulated correctly to protect the filmmaker and protect the movie because [box office is] not the whole business for us.”

More like this
The 8 best reality shows you're not watching, but should be
By Brandon Yu
Steve from 'Blue's Clues' gave us the closure we didn't know we needed
By Kara Weisenstein
According to the Emmys, only four shows mattered last year
By Kara Weisenstein
Stay up to date